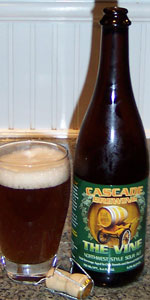 Notes: The Vine is a blend of sour wheat and blond ales aged in white wine barrels for up to 18 months with Gewurztraminer grapes.

A: Cloudy orange yellow. Small fizz but no real head or retention. No lace.

S: Aromas of brett, cherry, oak, and loads of funk.

D: Great, love it. Thanks Zack, SeaBass, and everyone else who have shared this one with me over the past couple months.

This is a mess to pour - the cork was impossible to remove by hand, so I tried pliers - which broke the cork in half. A churchkey removed the cork, but beer quickly surged out, spilling over my bar. Definitely seems overcarbonted especially when you consider it's been aging over a year at cellar temp.

HEAD: Pours a two finger wide off-white colour head - fizzy and violent as hell - which reduces inside 1 minute, though for about half of that it's only fizzing on one side....odd.

After completely disappearing, the head rekindles itself, fizzing back into life for 2 minutes more (still on only one side of the glass) before dying again - completely of its own volition. I've never seen anything like this.

No lacing sticks to the sides of the teku.

BODY: Body is a vibrant lively brilliant gold with blond and copper hues. The carbonation bubbles are magnificent in this colour of body. You could photograph this beer for a magazine cover; it looks incredible. I can't wait to try it.

That said, it does seem direly overcarbonated. But it's a unique appearance - both in terms of head and (admittedly less so) the body. It's definitely alive, but no yeast particulate is visible.

AROMA: Lovely. Gorgeous blond malts, impeccable white oak tones, white grapes with an ideal sweetness/dryness balance, golden malts, Belgian pale malts, clean crisp full evocative barley, a kiss of juicy fruity hop notes, and marvelous wild yeasts as well as bacterial notes - lactobacillus sure (albeit seemingly not as much as in Cascade Kriek), and ample sourness - about a 6-7/10. There are also some barrel sugars and grape skin notes. I also find a note redolent of pinesol, which works surprisingly well here.

This amazing aroma reminds me of the best Belgian blond sours I've encountered. Really incredible stuff; I'm dying for the first sip. It's mild in strength, but boy is it evocative. The dryness/sweetness balance seems ideal.

The moderate tartness of the grape coupled with the intrinsic grape flavours doesn't really fit into this flavour profile as well as I anticipated given the aromatics, but it doesn't feel out of place per se - perhaps just a bit too intense. In a beer so subtle, those notes are noticeably dominant, and while they don't break the cohesion of the beer, they do distract from the gestalt build as a whole.

Disappointingly, the sourness is a relatively mild 5-6/10 in terms of intensity. Cascade's other more sour beers (e.g. Cascade Kriek) offer more depth of flavour, but this beer has good flavour amplitude and duration.

The guiding oak tone throughout the beer is lovely, and bolsters its already impressive cohesion. The neutral barrel sugars found in the aroma are largely absent here, though I do think the beer's balance errs a bit too far on the sweet side. Dryer grapes might fix this minor issue.

What shocks is the absence of alcohol presence, which is damn impressive at 9.30%; how does Cascade produce these high-alcohol sours without seriously compromising balance?

Overall, it's a very likeable flavour profile with some excellent elements, but doesn't quite come together the way a world-class beer would.

TEXTURE: Crisp, overcarbonated, and smooth, with a perfect balance of dryness/wetness. Medium-bodied. Towards the back end, it's fairly smacky on the palate, but I'd love more of that along with more sourness. Thickness is apt for the flavour profile. Fairly acidic.

Good overall presence on the palate. This texture supports the flavour profile well and feels naturally complementary, but it's not a perfect marriage of texture to taste; it could be improved.

OVERALL: As it warms, I do pick up some neutral barrel sugars and some lambic-esque cereals/grains right on the finish, which aren't particularly welcome. This is a very drinkable enjoyable sour from Cascade, and the discerning drinker will be impressed by how well it hides its ABV. That said, Cascade brews world-class beers, but this isn't one of them. A good-but-not-great sour that isn't worth its high pricetag outside of its state of origin, The Vine is a beer I doubt I'll return to but that might be incredible with serious age on it. More solid work from one of the USA's best sour producers.

On-tap at the Cascade barrel room in Portland, OR.

Pours a clear, bright golden colour, with a hazy, light-weight body. Head is white, and forms some firm, frothy contours atop the beer. Looks decent.

Aroma is immediately dusky and bretty. Apple characters with sharp citrus, astringent bite and a slight vinous tone. Not a lot of straight oak. It's perhaps not as big as it might have been, but it's still very complex.

Light grape juice on the front of the palate melds with more citric bite. Mid-palate has a husky bone character, giving a crisp, pronounced but rather plain Brett note. Finish is clean and dusty, with a ping of acidity that resonates to an aftertaste of pear skin.

The acidity is a little hard to take after a while, meaning it feels somewhat unbalanced. Despite this, it's a good wild ale, and one worth seeking out.

Appearance: Pours golden verging on amber, fairly clear; initially, the head looks impressive but it fritters away rather quickly; no lacing, but a steady stream of bubbles rises from the center

Taste: Sweet white wine grape flavors, verging on fortified wine, with apricot and vanilla sugar developing; in the middle, the tart side appears, as does the oak; not much funk here and the sweeter flavors tend to overpower the sour ones

Overall: I wasn't expecting this profile from a Cascade sour, frankly; it was somewhat like a French white wine drinker encountering German whites for the first time; it is interesting but not really what I am looking for in a sour

spiced sour blonde ale blended and aged in oak with an ale containing white grapes. insane. very light in color, like a straight lambic. less sour and funky than dry and tart, white wine is a great comparison. the grape produces more tropical fruit notes.. starfruit and kiwi most noticeably. there is a hint some bitter citrus too, i believe some sort of citrus peel is among the 'spices', although there is no obvious dry spicing. the beer finishes smooth though with the eventual emergence of more traditional sour beer flavor over the winey dryness. the alcohol is unimaginable, strangely, or perhaps its lost to the complexity of flavors. i need another bottle of this all to myself in order to savor and wrap my mind around. one of the best beers ive had in some time, head and shoulders above cuvee de castleton.