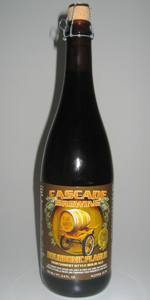 Notes: An outbreak of “the Plague” is upon us with this release! Bourbonic Plague features sour imperial porters aged in Bourbon and wine barrels for up to two years with additions of dates, vanilla beans, orange peel and cinnamon. This contagiously complex and incurably enigmatic blend continues to represent the pinnacle of our craft at Cascade Brewing
View: More Beers | Place Reviews
Recent ratings and reviews. | Log in to view more ratings + sorting options.

2011 vintage. Once the cork was popped on this one (no easy feat), it poured a very dark brown with a 1" of brief tan head, no lacing. Nose begins bourbon forward with a bit of oxidation, but as it warms up, the sour notes really shine through. Lots of leather, char, and vanilla, but lactic and vinous qualities as well. Taste is super complex and does feel at times like 2 or 3 beer in one. A bit boozy to start like a low-shelf bourbon, but mid-palate, the sourness and vinous quality comes through. Not at all bracingly tart, but enough to override the woodsy notes. The finish is the most complex part, as when the sourness fades, there are long lingering notes of leather, orange dark chocolate, licorice, red wine, vanilla, and cinnamon. Mouthfeel is full but doesn't overwhelm - just thick enough to provide texture without becoming a gut bomb. There are just a ton of different directions to look in here, and while not all of them make the most sense, it's a fun experience.

A very dark brown color. Small tan head that increases in size due to the carbonation. A pretty sight.
Aroma of funk, bourbon, dark fruit, cinnamon.
Bourbon and funk to start the taste. Raisin. Cinnamon. A little orange. Tart finish.
Medium-bodied. Alcohol not at all noticeable.
Would try this again.

A: Mahogany pour with a rapidly fading head. No retention or lacing.

T: Really hard to describe due to the complexity. Bourbon up front but instantly turns vinous and sour. Notable spice from the cinnamon. Touch of cocoa which mixes with the sourness in a very interesting way, reminds me of dark horse's sour stout a lot. Dark fruits abound. Not even going to try to expand my thoughts on this one, every sip is different.

M: Fairly heavy for a sour. Vinous as hell.

O: Incredibly complex with varied flavors as I drink it. It's got pretty much everything in it, it kinda tastes like three beers at once. Super interesting, I'm glad I got to try it.

A: Pours a dark purple/black color with almost no head

T: Follows the nose. Starts off with a wave of funk and vinous wine notes and then slowly picks up the bourbon, vanilla, cinnamon, oak, orange peel, dark fruit, and a touch of roasted malt. Finishes with lingering tartness and oak

O: A super complex and interesting sour that melds the base with the bugs very well. Makes for a great sipper due to the tartness and the 11.1%, which is hardly given a thought as it is barely noticeable. Definitely worth checking out if you’re into dark sours

L: Golden darkness but not a true black.
S: Lots of fruit notes.
T: A wild ride of dark notes much akin to a stout but with a mix of Cascade's usual fruits.
F: Sharp, citrus and a bit of heaviness.
O: Wacky mix of fruits and darks.

Have had a few vintages of this, still have a bottle in the cellar. Most recent bottle was at 2015 March Madness, vintage 2011.

Pours a ruddy brown. Some dark red to the edge, the barest smattering of a head 1/20" and no lacing. Appearance is its weakest link. Aroma was complex, leather, bourbon, cherry, tart and sour, brown malt, wet oak. Some roasted malt and cinnamon beyond that.

Taste allowed for all those complexities and blends to come together nicely, pushed along in the mouth feel with a mild vanilla presence that helps with cohesion. The cherry meets roasted malt and leather aspect brought a flanders component to it, but this beer is much bigger than most anything with the name flanders in it. Brett notes throughout, the sour aspect is similar to an old world porter, it really only clocks in about a 3 on the 10pt scale. If that. So much going on here, tough to write up everything that was going on, but it also made me sit back and realize that a lot of what Cascade does doesn't get the props it should, like this beer.

On the one hand is an expensive beer, but I would be hard pressed to not have one around just for the sake of breaking one out when I wanna show off.

So Raul got himself some of the bubonic tonic - yeah, I like that. Kind of different, ya know? My main man who served it to me called it a ‘sour stout.’ Raul wouldn’t go that far, but it was dark and fruity like looking at a cactus at midnight. I don’t know, I just liked it!

L: Had this on-tap at Whole Foods - Short Pump, poured into a snifter glass. Had a dark brown color with ruby tints and a thick, opaque consistency. There was a thin, off white, foamy head that quickly dissipated. Very good lacing.

S: A solid aroma of bourbon, a vinous quality, yeast, vanilla, and chocolate.

T: Tasted of bit of Belgian-style yeast, a hint of vanilla, a good shot of bourbon (and the barrels), a bit of chocolate, some of the vinous quality, and a little cinnamon thrown in as well. One of the more fascinating wild ale flavors I've tried recently. The bourbon and wine throws you for a loop but they play well with the other ingredients.

F: A decent amount of carbonation with a sharp, clean finish. Medium-bodied.

O: A very likable wild ale. Well worth a try.

Tap pour at Grizzly's Plymouth MN.
Black colored body. Minimal head, and no lacing.
Interesting combination for aroma and flavors of dark porter with chocolate, vanilla, and cinnamon, and the sour side with lots of bourbon and wine barrel.
Medium mouth feel.
Excellent take on a sour beer, with the dark porter well blended in with the wild ale aged in bourbon and wine barrels.

What a fantastic take on the American Wild Ale! It is pushes the idea of what a sour can be, by having a dark roasted malt character of a porter, with a wine like sour finish. Nice aromas of cinnamon, chocolate, spices, and sour fruit. Body is thicker than most sours, but still feels like a sour on the palate. Rich depth of flavors, fun and complex.