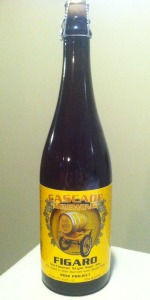 Notes: Strong blond beers were aged in fresh Chardonnay barrels for three months and then additionally aged with dried Adriatic white figs and Spanish lemon peel. Aromas of sweet malts, figs, raisins and citrus zest greet you in the nose. Hints of Chardonnay grapes, lemon peel and sweet figs roll across the palate, leading to crisp lemon sharpness in the finish that will leave a lingering sweetness on the tongue.
View: More Beers | Place Reviews
Recent ratings and reviews. | Log in to view more ratings + sorting options.

A 750ml corked and caged bottle, 2014 project. Poured into a 3 Fonteinen stemmed glass.

Appearance: A lightly hazy golden copper colour with a two finger off white head that dissipated quickly, but settled to a thin replenishing cap, while leaving some decent lacing.

Overall: The flavour of figs were a bit week, and overwhelmed by the dark fruits and especially the lemon. But it was still quite enjoyable, and a surprise at 9.1% abv, since it doesn’t seem anywhere close to being that high.

The Chardonnay barrels set a nice tone and the figs and lemon peel stand out. Lots of aromas and flavors, especially fruit. Heavy on the sour for sure, and more as it warms. Very enjoyable and different.

Thoroughly Enjoyed. On Tap at Hoppy Monk in San Antonio.

Best American fig beer I've had, and really elegant and clear for a sour. Of all the Cascade Barrel beers I tried maybe the one I'd most like to drink a big pour of.

2014 bottle poured into teku. Pours a perfectly clear light copper color, with a finger of tight, champagne-like bubbles, that recede to a persistent ring. Nice aromas of dried fruit, lemon and oak. Taste is great - not overly sour, nicely balanced, bright, and with a good level of oak. Mouth feel is just right. Overall, this is one of my favorite BA sours ever.

"NW style sour ale." "Blend of blond ales that were aged in chardonnay oak barrels for up to 18 months before aging on white figs and lemon peel for an additional five months." "Ale aged in oak barrels with white figs." 10% ABV. (The "up to" 18 months bit has me suspicious...why not just tell us how long you actually aged it for?)

HEAD: ~3-4cm in height. Fizzles out quickly, dying within 10 seconds. It was off-white in colour per the glimpse I caught of fit while it lasted, and was quite thin as well. Leaves no lacing on the sides of my glass as it recedes.

BODY: Clear and seemingly filtered. Pale copper in colour, approximating an apple cidre. No yeast/lees are visible within. Of average vibrance.

Appears aptly carbonated (probably due to bottle conditioning). Not quite a blonde in colour, but it's a nice looking sour ale.

I'm not getting much from saccharomyces, nor is there obvious pediococcus or other overt bacteria besides lacto and acetobacter.

I'd never guess white fig in a blind aroma test, and I doubt I'd find the lemon peel either.

TASTE & TEXTURE: Highly acidic and almost puckering in its lactobacillus-driven sourness, clocking in at about an 8 out of 10 in terms of sourness intensity. Pediococcus doesn't seem to be in play, but I do get acetobacter and concomitant acetic acid/vinegary notes. Apple cider vinegar definitely comes to mind.

More cedary than oaky, but the chardonnay/white grape flavour is a welcome albeit faint addition; I doubt this was aged longer than 9 months in chardonnay barrels. Quite rustic in any case.

White fig? I don't find it. Lemon peel? Sure, but it's mixed in to the rest of the acidic flavours.

Apple skin. Some funkiness - probably from brettanomyces yeasts. I don't get much in terms of microfloral intricacy; this definitely seems more like a stainless steel fermented clinical sour than a properly spontaneously fermented one.

Neutral pale malts lend this its timid backbone. Bacteria is the star of the show here and malts take a backseat.

Certainly balanced, and its 10% ABV is not at all noticeable; I'd figure this for 7% tops if I tried it blind. I definitely expected more complexity given the barrel aging and aging on white figs and lemon peel, but it's adequately intricate.

Depth of flavour is pretty good. Flavour intensity is high. Flavour duration is moderately high, but it does have a vinegary aftertaste that follows the main flavour profile.

OVERALL: It's another winner from Cascade, though some will deride its usage of lactobacillus as a crutch; this does lean pretty heavy on it and it feels like a stainless steel bacterial culture brew as a result. Additionally, Cascade's dubious marketing in terms of its barrel aging duration will erode consumer confidence - just tell us how long you aged it without this "up to" qualifier; when you're charging ~$30 per bottle, you owe us that much.

Fruited sours tend to be my favourite sours, but you've got to have the fruit flavour to have a fruited sour. Where's the fig?

In spite of these nitpicks, it's a hell of a brew that would hold its own against many traditional Belgian sours, and price aside I'd highly recommend it to any diehard sour ale drinker. I'll be giving it a pass in the future solely because of price, but it's certainly a good beer and were it something like $8 a 375ml I could see myself picking it up a couple times a year. How on earth is this 10% ABV?

Pours a sparkling light orange-peach color. Head production is fizzy and moderate for the style, quickly fading to a light creamy pink ring around the rim. Very active and bubbly long after the pour. Transparent.

Moderate puckering, definitely a sipper, but very enjoyable and drinkable.

As good a fruited American Wild Ale as there is. I didn't know this was aged in Chardonnay barrels until after my review, but the grapes are definitely noticeable on the palate; the dry finish expected from Chardonnay influence, not so much.
I've never failed to be anything but completely impressed by Cascade.

Golden-orange with nice clarity. Zero head to speak of. Acetic acid, brine, tropical fruit and oak aroma. Palate is aggressively acidic. Acetic and citric acids bomb the tongue, burn the mucous membranes and dry the entire digestive tract. Once you get past the overwhelming acidity, some pleasant, rustic wood characters come to light. Fruit notes are very subtle. Moderate body. Descent carbonation. A tad too dry for my liking. Overall, a nice fruited sour but could definitely spare a little acid.

Appearance: Arrives a fairly hazy amber color with a one finger head that leaves a few shards behind

Smell: Vinous with a lemony tartness and a hint of fig

Taste: Vinous and tart, at the outset, with white wine grape and lemon tones; funk and figs build, through the middle, with acetic sourness progressing through the finish

Overall: Decent, but not my favorite sour from Cascade

Color is beautiful orange-apricot attempting to pull in some pink with a minimal white film.

A bubbly, light slick body with a semi-dry swallow exhibits flavors of sour and enjoyably acetic lemon, grapefruit, charred oak, with some heat that comes through the nose on an exhale.

In October, I had a 2015 vintage on draft at the Barrel House which exhibited additional aromas of fresher fig and apple with white wine and spicy oak as well as apple and cherry on the tongue. It was also really sour.