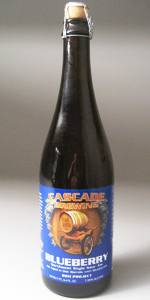 Notes: This NW style sour ale blends wheat and blond ales that were oak aged in barrels for six months, then additionally aged four months on fresh blueberries. Huge herbal notes of dense blueberries in the nose give way to hints of oak and a dusty floral note. Rich earthy notes of dark fruit on the palate lead to a tart finish that dries out to a base note of blueberry skins.
View: More Beers | Place Reviews
Recent ratings and reviews. | Log in to view more ratings + sorting options.
4.25 by Zekenyce from New Jersey on May 05, 2021

Pours a fairly clear pinkish red, with a one and a half inch foamy head and some foamy lacing. Active carbonation. Smells somewhat sour and lightly tart. Aromas of blueberries- strong, some malt, some oak, light cherries and cranberries, a light funk. The taste has a decent amount of sourness and a light tartness, with the flavors of blueberries- as strong as the aroma, malt, oak, light cherries and lemon, light funk, light raspberries as it warms. Smooth for what it is, a very good medium body, well carbonated.

Excellent blueberries that dominate the aroma and flavor, but there’s more depth and variety than that. Time may have worn down the sour and tart aspects a little, as well as the acidity. Very enjoyable.

Pours an blue color with some red highlights. Smell had blueberry,with some citrus. Taste had a sour blueberry hit in a good way mixed with some citric tartness Medium carbonation with a dry finish..

2012 Project. cellared for years. Has held up way better then expected. Tuns of oak character but not much Blueberry left. Not as sour as other Cascades I've tried. A little watery and lacking much aftertaste but it is still very complex.

2016 Project. Smells of ripened Blueberry. Mellow sour Blueberry taste. Much different then 2012 as expected. hard to pick a winner, both are very good

Bottle thanks to Ian

So I’ve had a bunch of cascade beers. I’ve visited the brewery.

I took home some tulip glasses.

And I still cannot believe there is no Brett in here. So barnyard/horseblanket.

Not as lacto sour as the usual cascade brews but seriously acidic- heartburn City.

It’s awesome but expensive in other states/countries, and cascade have other offerings that,imho, slay it.

Still, the wifey lurves this one,so I’m getting it on the regular.

Bluer than the state of Kansas, this one is speakin’ to me. Sour blueberries on the nose, meet the tongue like that one French girl that gave Raul some action back in ‘09. Good stuff, but Raul ain’t hella trippin’.

Reviewed from (long-standing) notes. 2015 Project, drank in August 2016. Poured from a 750 mL bottle into a Cigar City Brewing goblet.

A: Pours like dark cranberry juice in color, with a thin pink head that forms and disappears quickly. A good amount of visible carbonation, and remains translucent like stained glass. This is fairly pretty.

S: Lactic acid and a nice funk. More funk than some Cascade offerings I've had. Nice fruity blueberries, and a big tangy and tart punch. Some lemony citric acid. A touch of vanilla-forward oaky tannins, and these increase as the beer warms a bit. A nice aroma for sure.

T: Tart blueberries and cranberries, lactic acid, and a mild funk (though much less than present on the nose). A mild malt sweetness. This isn't overly sour, but it is quite acidic. Oak and mild vanilla here as well. Blueberry tart and oaky dry on the finish, and some more funk on the exhale. The funky flavors do increase some as it warms as well.

M: A crackly mouthfeel between a good amount of carbonation sensation and the tart acids. The body has a fair amount of heft to it. Low alcohol presence.

O: Enjoyable, but I didn’t like it as well as the Bruery's Beauregard from a couple years ago. It’s not as much of a lactic bomb as some of Cascade’s offerings, but this isn't their best. I’m not sure it’s worth the money that Cascade bottles go for around here, but it’s enjoyable.

A tasty, not overly puckering blueberry sour ale. Oddly enough it tastes more like cherries than blueberries to me. I was hoping for more complexity from the barrel aging.