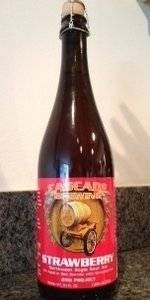 Notes: This NW sour ale is a blend of wheat and blond ales aged in oak barrels for up to 14 months with strawberries and vanilla beans.
View: Beers | Place Reviews
Reviews: 73 | Ratings: 517 | Log in to view all ratings and sort
Reviews by shoyoroll:

This beer pours a hazy, medium orange-brick amber colour, with a teeming tower of puffy, rather loosely foamy, and fairly fizzy off-white head, which leaves some streaky island atoll lace around the glass as it quickly dissolves.

The bubbles are very persistent in their palpable fizzy and sternly frothy measures, the body just on the low side of a typical middleweight, and plainly smooth, if you're capable of applying more than a soupcon of cognitive dissonance to the various lurking astringencies. It finishes mostly dry, the strawberry there, of course, but in a reduced, deconstructed as shit manner.

Overall, not a bad sour fruit ale, the usual metrics about this sort of thing that piss me off conspicuous by their welcome absence. Not particularly balanced, as the sour, musty, and funky notes skew things in their direction, of course, but 'less than much' - and thus drinkability (such as it is, for 40 bucks a bottle) is achieved!

Shared by the Thorpes. Thanks a lot!

The beer appears hazy and orange with hints of pink. The aroma offers strawberry purée, yeast, and yeah, that about covers it. The flavor is tart, balanced by a natural sweetness from the berries. Fizzy, zesty, prickly carbonation with mild, but present acidity. Overall, a solid fruit sour.

T: Initial pvc pipe, a burnt plastic wrapper of sorts with some musty/Earthy notes, with underlying strawberry, like second runnings of old strawberry jam. The finish is like a lingering plastic, some funky bitterness, lingers with some puree mashed strawberries. Not really pleasant.

O: Worst Cascade beer I have had to date

Appearance: Pours a dark reddish orange with 1 finger of a fizzy off white/eggshell colored head that settles quickly to a very thick ring. Body is very hazy but still translucent, with quite a bit of visible carbonation.

Smell: Strawberries (surprise!), with lesser notes of oak, wheat and slight spices. Straightforward and clean for the most part, but with a hint of a bandaid/medicinal character that I get in a lot of strawberry sours.

Taste: Medium/high acidic sourness. Strawberry mostly with hints of vanilla, oak and lacto, but all of those are much less prominent. Like the aroma there's also distinctive, what I can best describe as, bandaid character that comes out more in the finish and aftertaste. It doesn't completely override everything else, but it does take a bit away from the overall enjoyment.

Mouthfeel: Fully end of medium bodied with a slightly creamy mouthfeel. Carbonation borders on high. Alcohol is hidden reasonably well, but does begin to produce a warming sensation in the chest the most it's consumed.

Overall: Good, but definitely one of Cascade's weaker offerings. I'm beginning to think strawberries are just not a fruit that's meant to be brewed with as I've yet to try a great beer that uses them. As for this specific one, go ahead and try it if you're a fan of Cascade, sours or strawberries in general, but I doubt I'll be getting this again.

Thanks to melot2811 for this bottle, plucked from the cellar to celebrate & mourn the inevitable passing of my backyard strawberry patch with this weekend's coming hard freeze. 750ML bomber split with my wife.

Decanted slowly to avoid pouring any potential mucus plugs into the beer, it announces itself in 50 Shades of Pinkish Orange, Opaque Edition. Fizzily carbonated. The nose is predictably acidic, with a strong strawberry angle & a distant whiff of the wood pile. Lovely.

Cascade Strawberry brings out the knife sharpeners. Expecting something mild - I don't know why - I'm hit by a wicked-edged tartness (not sourness) that singes the top of my mouth. Slightly under ripe strawberries line the middle with lemon zest. Drying oak rounds out the lineup. Eminently drinkable & highly carbonated, this one is still a sipper.

I hate face-rippers & anything that can be described with the words 'horse' or 'blanket', so this one is right up my alley. Nothing game-changing, but I believe I can honestly say Cascade is my favorite U.S. brewer of wilds. Very good beer.

Strawberry from Cascade Brewing / Raccoon Lodge & Brewpub
Beer rating: 90 out of 100 with 517 ratings