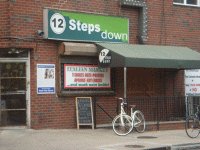 3.94/5  rDev +9.1%
vibe: 4 | quality: 4 | service: 3.75 | selection: 4 | food: 4
At least two people from out of state told us to go to 12 Steps, so there we went on a Friday night after hitting a couple of bars before. This joint is in the Italian Market, hidden in a basement exactly twelve steps down from the street. Due to the strange laws governing Pennsylvania bars, smoking is allowed here, and boy do folks go at it.

You’d better love those cigs or stay away from 12 Steps.

I don’t mind a cigarette here and there but this place was almost too much. We had to wash our clothes right as we got home, and even my backpack smelled the next day (didn’t think it would need a wash too).

Besides that, the atmosphere here is divey and fun, with a pool table, a square-shaped bar and plenty of tables and space to roam. Lots of hipsters drinking PBR, despite a hefty tap list that included Hopslam, Two-Hearted, Edmund Fitzgerald, Monk’s Flemish Sour, Nugget Nectar, Boulevard 80 Acre and more. 10 taps total, all priced at six bucks except the ‘Slam and Yuengling. Check out the extensive can and bottle list too..

The food ain’t nuthin’ to scoff at either. My eight-dollar veggie burger was killer, and so were the fries with smoky ketchup and aioli. I’ll come back here with my smoking friends!

They have food but I've never tried it. It's bar food, chicken fingers, wings, and a few sandwiches. At least they're reasonably priced around 7 or 8 bucks.

The beer selection is good - unless you count Yuengling! Of course, maybe that's their customers talking... 9 taps, I think, featuring 2 from Ballast Point, Bell's, Anchor, Great Lakes, Yuengling and, yes, Dock Street, Weyerbacher, and Troegs. Then there are bottles and cans: Duck Rabbit, Caldera, Red Racer from Central City, Oskar Blues, Brooklyn, PBC, Yards, Victory... (they seem very influenced by the selection at Bella Vista). It's an impressive list that can't be denied.

As for service, I haven't found it to be great, but it's OK. Maybe just average. It seems to me like every time I was go there the bartender is chatting with and catering to the regulars without much concern for anyone else (meaning newbies). Or, maybe they're just not that good, I don't know. They were never unpleasant though, just slow to get back to me.

Overall, it's got a good, dingy kind of vibe. They sometimes do weird events, and they have interesting art on the walls. It makes a great stop on a south Philly pub crawl, but it really shines later on when you just want to hang out.

Reviewed by DaveHS from California

4.05/5  rDev +12.2%
vibe: 4 | quality: 4 | service: 4 | selection: 4 | food: 4.5
Nice spot in the heart of the Italian Market. Notable not only for their solid tap list and reasonable prices, but also for the fact you can still smoke inside. This is definitely a plus, as most of my smoking friends are more willing to leave the house for a beer if they know they won't be forced to stand out in the snow. The food is above average, especially the Italian Sandwiches. The roast pork with broccoli raabe was a standout. Fun, lively atmosphere. You won't necessarily find anything crazy on draught, but you won't be stuck drinking Budweiser either.
Jan 16, 2011

Reviewed by WhittlingWombat from Pennsylvania

This place is what I would call a very, very nice hole-in-the-wall. I don't want that to paint a poor picture for you though. I call it that only because it is your nicer-end dive bar. It isn't trim and fancy. There aren't any frills about it.

Now I'm the kind of guy who enjoys sitting with a beer and a smoke, and this is a bar that one can do that. It has a very relaxed atmosphere.

The bar is outlined with crazy awesome disturbing artwork that I can only describe as really cool. It's definitely worth picking up your beer and just walking around the place and admiring all the pieces. The artwork alone was great conversation for me and my buddies.

When I walked into this place I was not expecting the beer selection that it had. I was impressed. I'm the kind of guy who enjoys spreading the good news about good beer and I was able to introduce my friends to some really good brews. 12 Steps Down has a nice variety.

I wish I had tried some of the food at this place, but we didn't stay there too long because we had a handful of other places to go that evening, though I would love to go back again and give the food a try.

12 Steps Down is definitely a place I would recommend any beer lover in the Philadelphia area check out. Between the beer and artwork alone, it is a very cool place. So go check it out!