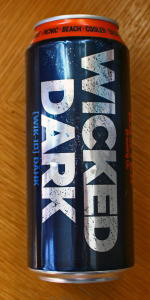 Perhaps the darkest black beer I've seen. Rich smell of roasted malt and chocolate. Taste is strong roasted malt with chocolate and bitterness, some hops. Mouthfeel is pretty good, creamy, a little foamy, with a fairly bitter aftertaste. Overall, this is a really good stout. The 10% ABV doesn't really show up in the taste. The aroma is top notch. Taste is a little too bitter so loses some points there. So overall this is very much worth trying although I think it has some faults, but maybe others won't evaluate the faults as I do. It is certainly a high quality beer.

A- Tallboy into a huge snifter with a midnight oil black body and a deep mocha brown cap rising to two inches high. A thick and creamy consistency to the head and great retention. Massive sheets of lace coat the glass all the way down.

S- Bitter dark chocolate and roasted grains provide plenty of aromatic strength while the yeast provides some dark fruit hints. The burnt and charred barley is the main component and beyond the cocoa it brings ashy, true roast, Italian coffee bean and toasted nuts. A good balance of bitter and dessert stout notes.

T- Bitter and roasty grains once again provide a massive amount of oomph to the beers with a rich flavor profile of bitter super dark chocolate, toasted nuts, burnt grains, coffee grounds, roast barley and slight caramel. Dark fruits like raisin and plum are secondary to this as well as hints of alcohol, acrid bitterness, earthy hops and vanilla sweets. Also has a hint of something spicy similar to Belgian yeast, probably a ferment byproduct.

MF- Creamy and thick overall body with a medium level of carbonation. Not chewy but somewhat close to that and it ends with a really intense roasty bitterness.

The name is right on the money. This one was obviously brewed with a boatload of very dark grains and they lead the way with an intense bitterness.

This is a solid beer for its category, Imperial Stout. Deep and black with a hearty dark malt flavor, this beer just feels robust and solid--and yes, fairly boozy at 10%. It did not have the off flavors of some lesser stouts--not too sweet, not too bitter or astringent. I didn't a pick up a lot on the nose, but there was good malt (wow, actually 12?) and hop and booze in rich darkness. I feel it's as advertised and solid, even if it's not a showstopper because of any one aspect that stands out. OK, so maybe the malts. And sometimes, being solid and hearty is just fine.

Poured into a snifter, the appearance was a black color with a thick finger’s worth of tan foamy head that dissipated at a nice pace. Sly stringy lace. The aroma had some bitter ends of hoppy grassiness evenly flowing into some roasty coffee grinds and a slight abrasive dried cocoa malt. The flavor definitely embraced the roasty to bitter side of this imperial stout to end up pummeling the aftertaste with the roast and bitterness of the coffee grounds. The finish is quick and dry, somewhat sticky. On the palate, this one sat about a medium on the body with a decent sipping quality about it. Mild carbonation. ABV did actually feel close to that 10% as they say. Overall, well, the feel is the best thing about this to be honest as the aroma and flavor seem to actually stick more towards the bitter bookends of the coffee grounds.

A: I'm not sure I've smelled 12 malts at once before but damn! Smells like burnt toast, coffee grinds, caramel, dark chocolate, sweet chocolate, and sweet molasses.

O: A bit harsh for the unexpecting, perhaps. But this is my kind of stout! Sure I love a good BA stout as much as the next guy, but making a stout this good without outside influence is few and far between. And out of a can, this beer is worth seeking out. Cheers!

Yard work done, time to relax in the 'Zebo with a pint can of RIS....

Poured into a small tulip, it's an inky, opaque brew. Has a nice, creamy, mocha-hued head, which lasts well. Lacing is top-shelf, with plentiful foam sticking. Nose is a luscious blend of aromatic coffee, choco, mocha and toffee. Wicked is quite smooth, and the medium-plus body is a touch chewy.

Taste follows suit with more dark, bitter choco, some espresso, a hint of molasses and some earthy, tobacco-like notes. The back end finishes up with some floral, rindy hopping, which lingers pleasantly. A solid RIS, all-in-all. Prosit!

Pours wicked dark. Medium-dark brown head. Aroma is a complex but mashed together scent of dark malts, chocolate, booze and dark fruits. Taste is also very complex/mashed together. Feel is light and soft. Just about the perfect amount of carbonation. Overall, I think this is a great stout. I think you will have to have quite a refined palate to pick out everything going on here. Chewy is a good word to describe this one.

Poured into a 16 oz Chimay goblet canned in early 2017. Pours a very slick and attractive almost completely black with a massive two finger light brown head, that leaves gobs of lace as it slowly settles into a thick layer of foam.

Overall this is a world class stout, seriously this is roasty and spectacular. You muse pick up if you see it.

A: Pours a pitch black color with a fingers worth a head that fades down to a thin cap that leaves some good lacing

S: Lots of roasted malt up front with some caramel, coffee, and dark fruit in the back

T: Follows the nose. Starts off with the roasted malt and some coffee, followed by dark fruits, dark chocolate, caramel, and molasses. A very light rye spiciness poke out towards the end as well. Finishes with lingering roast and coffee notes

O: A great sipper for the colder months. Sneakily easy to drink despite the double-digit abv. Nicely complex and interesting, especially for a non-BA imperial stout. Definitely worth trying if you're into dark, malty beers

O - One of the best non-flavored, non-BA stouts I've ever had.

Wow! Dark Dark Dark! Pours rich and thick. Definitely, bitter coffee and strong chocolate with perhaps a small hint of vanilla. Very well balanced which I like. Has a warm and everlasting flavor (similar to Founder's Imperial Stuot). This is an excellent version of an Imperial Stout. Baxter has some surprisingly good beers and this is a nice addition to their offerings. The price points are excellent.
Enjoy, this is an outstanding beer that is very reasonably priced.

Pours like motor oil (not quite like Ten Fidy, but close) and produces a thick dark cinnamon head. Nice lacing. Smell is chocolate, coffee, dark fruit, and char. The flavor follows nicely. Rich dark and milk chocolate, coffee, dark fruit, with a firm hop and char like bitterness to balance it out. Feel is thick but super drinkable. Super smooth and the booze is only slightly apparent. This blew away my expectations. Really excellent IS at a great price point ($12 a 4-pack of pounders). Pick this up if you see it.

Wasn't expecting to see this beer in stores due to its apparently very-limited release, but I managed to get a 4-pack at Craft Beer Cellar in Westford earlier today and I couldn't be more excited to crack this can and give this baby a shot! A 10% imperial stout featuring 12 malts (including all four categories of grain; barley, wheat, oats and rye!) along with American and NZ hops, Wicked Dark, stylized on the label as "[WIK-ID] DÄHK]," is a bruiser of a dark beer that blends the concept of a multigrain stout with intense American ingenuity and imperial immensity.

Pours utterly terrifying into my Baxter branded can-shaped glass; a supremely dark beer, as expected, topped with a ridiculously dramatic mocha-colored head of foam. The lace on this is absolutely incredible as well, forming tiers of deep brown bubbles as the head fades to a solid finger in a retentive showing of dominance. This beer clearly isn't messing around.

Nose is deep and complex, with roasty notes of chocolate and coffee combined with some fudgier, deeper scents reminding of dark fruit and vanillins/tannins. Earthy, almost minty and leafy hops, back up this intense chocolate-fudge background with a slight bit of levity. Bigger sniffs indicate some graham cracker, hints of ethanol and English toffee. I'm certainly going to try my best to respect this beer, but I fear my cowering in a corner may be treated as defiance against its immense power... so I guess I'll just have to buckle up and take a sip!

Damn, that's dark! The enchantments of this beer extend far beyond its initial temptations, though, that's for sure... I get huge espresso-like acidity melding with intense cocoa and roast notes, molasses and dark fruit. Definite "Russian imperial stout" influences here in the amount of grain and the complexity of the different elements. Spicy rye, soft wheat, oats and bright hop vie for attention in a veritable morass of composed elements ranging from the lightly-citrusy to the berry-like.

Feel is thick and velvety with a swallow that's still nice and pillowy. Carbonation is kept on the lower end to allow the roasty and chocolate-y flavors as much passage as possible while still buoying the 10% ABV to approachable levels. The wheat and oats lend some softness and gravitas here while the rye provides some crackery spice and earthiness, propelling this imperial stout into world-class territory. So glad I bought a four pack! Now... do I age one for 1 year, one for 2 years and drink the other fresh?... Hmm...

Wow this is great another affordable great Imperial Stout. The beer is dark, as the name suggest, thick dark tan head that shades the glass. The nose is full of coffee, toffee and roast. It reminds me of Imperials coming out of England. The flavor is nice, starts sweet and chocolaty and then moves a heavy roast. I could see some not liking the aftertaste, an almost roasted, charred vanilla but it suits me. The finish is slightly bitter I imagine a little time or in a barrel could do this beer nicely. Also less then $13 for a 4 pack of 16oz cans nice.