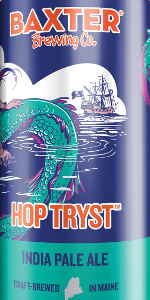 Picked up a four pack of this for a really good price at a local liquor store... I've been seeing Baxter ads for this new one on social media for weeks leading up to finally seeing it in stores today. Brewed with Azacca, Vic Secret, Ella, Mosaic, Citra and Calypso hops, this is a medium strength IPA clocking in at 6.4% ABV. That's quite the hop lineup... reminds me of Baxter's classic Bootleg Fireworks (which features, I wanna say, at least 2-3 more hop varietals!). How does this one stand up against something like their Stowaway IPA, which is a classic West Coast bitter and punchy pale ale, though?

Pours an attractive light-medium amber with a retentive head of eggshell-white foam that leaves behind some light, splotchy lace here and there. The body has a lot of suspended solids, however, and the effect in this beer is not an attractive one. The beer itself is insanely clear, bringing the particulate matter into greater focus. It's just a weird and overly-contrasting effect that I can't get behind.

The nose immediately makes me concerned for the overall quality of the beer as well. I get some earthy tea-like notes, light guava and red apple, and then... diacetyl. The unfortunate "buttery" note really ruins the proceedings here, which otherwise seem kind of nice and unusual, though maybe a bit all-over-the-place. Light pear, apricot and tangerine all kind of become a muddled mess when the negative elements are taken into account.

On the tongue, this is way too slick and far too heavy-bodied for its own good, with strong caramel notes underpinned by light notes of apricot, pear, apple and spice. Earthy black tea and light pineapple work their way to the front, but the finish is just sickly-sweet and not refreshing whatsoever. This is a very, very tough drink. I'll probably end up pouring out my last 6-8 ounces and dumping the other three cans I got, because this is just plain not-good. It's just weird because the label clearly says they tried to "keep the color and body of this beer light and crisp"... it just feels like I'm not drinking the right brew. Also, as if this couldn't get any worse... there's no canning date... c'mon guys. This is just poor.

It has a yellow amber colored pour underneath a foamy, white head that laces as it fades. Slight haze,

The aroma is mainly floral in its hop profile. It's fairly pungent in that regard. White bread and oats buried below.

There is a brief malt sweetness to start and then the floral hop bitterness takes over. But while it is notable in the flavor, it seems less forward than the nose suggests.

Poured into a 13 oz teku glass strange I can’t find a date on it. Pours a very cloudy dark yellow, with a large white billowy white head, that leaves a thin wall of lace.

Mouthfeel is a solid medium, plenty of life, a tad dry but not a complaint, and I will drink the heck out of this at less than $10 a 4 pack of pounders.

Overall am I blown away, probably not but this is a very nice NEIPA at a excellent price.....

A: Pours a hazy golden yellow color with 2 fingers of head that fades down to a thin cap that leaves good lacing

S: Citrusy, tropical hops up front along with a bready maltiness in the back. Some stone fruit in there as well

O: A solid IPA that takes a little while to open up and grow on you. Easy to drink. Enjoy the journey

Picked-up a four-pack of cans at Long Ridge Wine and Spirits for about eleven dollars. This is a new brew from Baxter. I am a fan of Stowaway, which I have not tried in a while. This is a solid, local offering, at a reasonable-price point - would buy again.

Slighty hazy light straw color. Not much head , not retained and very slight lacing.
Not much on the nose. Faint pine/citrus.
Taste was pine, citrus, fairly smooth (due to the oats addition) plenty of hops in there, Azacca, Vic Secret, Ella, Mosaic, Citra and Calypso hops, 6.4% ABV (@baxterbrewing)
The mouth feel was disappointing as it was soapy and a bit over carbonated.
I would think this would be better on draught in Maine, as is usual with Baxter. But this leaves their flagship Stowaway flatfooted.