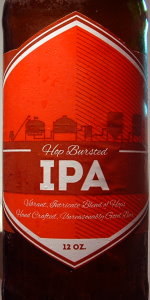 Notes: This explosion of hoppy flavor is a mix of over 17 different hop varieties and a huge burst of aroma from distilled oils. All the hops are added at the end of the boil or in the dry hop phase resulting in little to no destruction of the hoppy goodness.

Thanks to Jim for this one!
Pours into a fluted tulip glass with a finger or so of foam, drippy lacing and a light golden orange color. Perfect bright clarity, no haze at all.

Taste is hoppy and resinous, moderately bitter and hoppy with a lingering dandelion green bitterness in the aftertaste. Not much fruit present. Light bodied and easy to sip. Delivers on the hoppiness, for sure. The large blend of hops renders the hop character indistinct, in favor of a resiny bitter punch. Overall I enjoyed this pretty well.

Aroma: complex; moderate strength; floral with hints of tropical fruits including oranges, and some pine.

Flavor: largely follows the aroma. Some pine and grapefruit in the finish. Moderately bitter for style but leans towards bold for style overall.

Appearance: This is the only thing that was even slightly disappointing about this beer. The hopbursted IPA has so much hop oils in it that it actually has a slight haze from the hops. It is a nice light orange color. One of the lighter colored IPA's I have had, but the fact that it is as dark as it is without anything other than base malts is pretty neat.

Aroma: Huge hop punch. Very tropical fruit, some orange, a little bit of tangerine, and maybe a hint of lemon. A little bit of an herbal spiciness. There is no doubt about the intent of this beer... Hops with just enough malt to give the hops a stage.

Taste: I'm loving this. It follows the aroma with huge citrus and tropical fruit notes. The idea of hop bursting a beer is to get a lot of hop flavor without much bitterness and that goal was definitely achieved with this beer. Not much in the way of bitterness, but huge amounts of hop flavor. Again, the malt flavor is there, but it acts more like a carrier for hop flavor.

Mouthfeel: This is where the beer really shines. Without any caramel malts, the mouthfeel is nice and crisp. No lingering bitterness, very clean, and for 6.9% ABV, it feels very drinkable and dry. Just the way a great IPA should feel.

Overall: I love that we have an IPA being brewed year round in Madison that can rival the big well known brewers. A great quality offering from Blue Pants. I'm so happy I got this on draft at the release in the taproom.

Way toooooo much carbonation. So much so that I could not enjoy any aspect of the beer's taste. Aftertaste was acceptable, but not by much. I'll pass on this IPA.

I'm trying this at the brewery. It poured a slightly hazy orangish with white head that is not leaving much lace. The scent had citrus peel notes. The taste was nicely balanced and easy to drink with subtle tropical fruit peel flavor through the drink. The mouthfeel was lighter in body with good carbonation. Overall its a decent beer.

M: Medium body and leaves a bit of oily hop resin on the tongue.

O: This is easily my favorite IPA from Blue Pants. I need to pick up some fresh bottles soon.