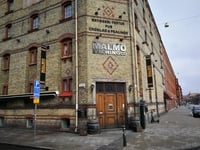 Rated by Jah_Json from Sweden

Vibe is laid back, and quite Scandinavian. Service is quick and attentive but not overly chatty.

Selection is good, with about 40 taps, usually about a dozen house beers, three or four house meads and seltzers. The rest are guests, and the variety is usually quite good. The house beers are usually good, but nothing spectacular. The mead is very good, though. That they do half pours is appreciated as well!

The food varies quite a bit in quality, I've had a great burger, a questionable meatloaf and good BBQ here. Generally the food is on the salty side.

Overall, MB is usually a good, but not great time. Worth a visit, but maybe not as a main beer location of an evening.

Reviewed by LinusBohman from Sweden

4.2/5  rDev +0.5%
vibe: 4.25 | quality: 4.25 | service: 4.5 | selection: 4 | food: 3.75
Had a nice evening here together with a mate from college. As we had booked a table we hade a waiter who brought us the beer and food we ordered. Excellent service and the waiter was knowledgable with a good sense of beer and he was great at feeling in what kind of customers we were. The food was quite ok, not a whole lot of food but quality triumphs over quantity.
I especially liked that they hade a wide selcetion of great beers, expecially on tap but also som bottles, with really good pricing for Swedish standards. The fact that you have the option to chose just half a glass is very good as well.
Cozy place that attracts a nice crowd of beer geeks. I very much recommend a visit if you're in Malmö.

4.15/5  rDev -0.7%
vibe: 4.25 | quality: 4 | service: 4.5 | selection: 4 | food: 4
Multilevel Brewpub at the Chocolate Factory center in Malmo. Busy Friday night. Very nice downstairs but limited seating. Bar on ground level has all current beers, 2 special beers and other options ( i.e. wine, liquor). Upstairs has considerably more space/picnic tables. Drinks are essentially limited to current beers. Bar upstairs had a consistent line of 8-10 people getting beers. Food available on both levels. Excellent burgers with different styles. Other options looked good but didn't try. Both levels active with people socializing, talking...busy and lively but not annoying or distracting. People were very friendly and helpful. Took time for advice on beers and food, got us a taxi for return to hotel, etc. while handling many patrons ordering food, drinks or asking questions. I made mistake of ordering 2 burgers, and forgot to say my wife likes her very well done. When brought to attention of staff they replaced her entire meal at no extra cost, and had it back to her very quickly. Top notch. Beer was good quality some very good. My wife and I had a very good time, and would love to go back. Great place for beer seekers, and a great place for just the person looking for a friendly spot to grab a drink and something to eat. Big time thanks to Bark for suggesting a trip to Malmo would be worthwhile.
Sep 06, 2014

Reviewed by FightingEntropy from Minnesota

4.21/5  rDev +0.7%
vibe: 4 | quality: 4 | service: 4.5 | selection: 4.25
Sitting at Carlsberg after the tour, we researched online that Malmo Brygghyus wasn't open on Sunday, so we decided head over yet that afternoon. Taking the train from Copenhagen to Malmo is just over a half hour ride over a bridge to Sweden. At mid-afternoon, the sun was setting on the horizon but we still had a beautiful view of wind turbines and water under multicolored clouds.

Nearly dark when we arrived, the mile plus walk from the train station through Malmo's heart was made easy by the Christmas lights up and down the shopping district. In the main square, multi-story trees were decked out for the season as well.

Malmo Brygghus is a small, two-story bar with tables top and bottom in a U shape around the brewhouse in the center. Ian ordered the best beers of the stop, starting with Cacao-Porter made with cocoa from a local chocolatier and the False Dmitriy, a Russian Imperial Stout, that lived up to its name. Check out the website for more information all of their beers.

I started with the Beersson's DIPA and followed up with the Simcoe Pale Ale. I initially described both as "muted" somehow. Chatting with the bartender Hampus, he said Swedish homebrewers, which he was one, tended to add more caramel malt. Both leaned towards a toffee and caramal sweet rather than a bite in spite of sizable hops in both. I jokingly called it a Swedish IPA as I was trying to explain a Bell's Third Coast ale or how Masala Mama is a Minnesota IPA.

We finished by sharing the Witbier, which had a great nose full of coriander and it drank as a strong representative of the style in a sweeping glass that got extra marks for presentation. After drinking most of the beers on tap, we headed back with recommendations for drinking Copenhagen, especially the Mikkeller Bar.

Admittedly, for me initially, a partial reason to hit Malmo Brygghus was to bag another country with the short trip to Sweden (up to thirteen countries now). However, I was rewarded with some well crafted, tasty beer and excellent discussion of a burgeoning beer scene in Sweden with Hampus.

I've been drinking craft beer (microbrew back in the day) since about Y2K. Showing up to the US beer world just after the shake out of the 90s, I feel like I've lived the future of Sweden and other countries that are budding breweries from their homebrewers. At Malmo, I felt the same energy, the same excitement that when I tasted my first great brews, my first beer adventures. Skål Sweden