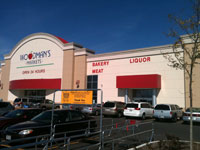 View: Place Reviews
Reviews: 3 | Ratings: 6 | Log in to view all ratings and sort
Reviews by Bshaw22:

5redbaron from Canada (ON)

Another one of your typical Woodman's. Massive coolers in back of room partitioned off from grocery store. Some slightly different selections than other regions of the state, as areas have different distributors. I was happy to find some older Unpluggeds here (perhaps from when the store opened?) and the higher end Central Waters beers seemed to last longer as well. Perhaps no one knew of this store yet that popped up quickly in the north suburbs of Milwaukee, but the cats out of the bag now. If you want value and a good broad base of beers from Wisconsin, Woodman's is always a great start no matter where it is. Then go elsewhere for the harder to find stuff.

Another Woodmans at my disposal. Happy Birthday to me! Much like my home Woodmans in Oak Creek the beer selection is ridiculous. Pretty much every American craft beer and foreign import that's distributed to Wisconsin is available. With over 80% of it kept cold. Solid singles for mix "ticks" pack. Bombers from all over. They even have friendly little end caps with a 95 and up rating beers. Not something for a beer geek but for a casual craft buyer it could help steer them in the right direction. Quality at all Woodmans is usually not a problem. Just gotta watch your hoppy beers. Since the sheer volume moved isn't enough to rotate all beers.

Basically Woodmans is THE cheapest option in town hands down! If you are looking for a craft sixer and you don't go to Woodmans you obviuosly have too much money.

Let me start by saying that I feel sorry for all the other stores I used to patronize. They'll rarely see me any more!

I've been waiting patiently for this Woodman's to open since it's around 7 minutes away from my house and as the chain grows, they seem to be getting better and better beer selections.

This location is by far the best I've ever seen. I'd say it actually rivals the Binny's chain in stock. Maybe not as much rare imports as, say, Discount, but they've got just about everything one could find in the greater Milwaukee area.

I had to make circles around the parking lot for a place to park! It was poppin' there! I'm a little disappointed that the Liquor department's entrance is on the same face of the building as the main entrance. The layout was always nice when it was around the corner. With it being a brand new store (Liquor just opened Saturday) it's so clean you could eat off the floors.

The first thing I saw was that the liquor department was laid out a little bit differently than most of the others. Straight through the entrance was an open-faced cooler filled with only ciders. Next to it was a cooler filled with malternatives.

The first actual beer part I saw was a Great Brewers.com end rack with 95+ rated beers. Awesome selection! Just to the other side of it was another one with different beers!

Moving back there was a cooler stretching the length of the wall on the left side with doors containing all the mix-12 packs, cases, etc. of mainly craft beer. In the middle of the aisle were two rows of stacks and stacks of beer cases that you could walk between. It was like a warehouse of beer! On the end was a New Glarus end-cap featuring the 'red twins' some seasonal stuff, and some Unplugged series beers.

The right-hand side cooler features all the European imports in all bottle formats. Awesome selection! Moving towards the back wall was the seemingly never-ending open-faced cooler filled with 6-packs galore of U.S. craft. Towards the end of that cooler were the large format bottles of U.S. craft. At the end of the first row of coolers there was a fully stocked build-your-own 6-pack selection with some great beers in it! After a break in the cooler for a door (I guess people gotta stock somehow) was another cooler on the other side. This one contained some odds and ends but was worth taking a look at.

I can't even begin to list everything they had there. The selection was the best I've seen in the great state of Wisconsin and definitely can not be beat. If you want it, the chances are damn good that they have it. Not only that they have it, but it's cheaper than anywhere else too! Most large bottles were $1 less than anywhere else I've seen. BMC stuff? I guess I could mention that even without looking at where it was, they have aisles and aisles of it.

My only complaint comes from the quality though. Besides the bottles that I picked up to purchase, the only other bottle I looked at, specifically to see the date, was a Stone Cali-Belgique which was dated Best Before 05/13/10. Come on guys, Stone stuff has been past it's date almost everywhere I go. Otherwise everything else I saw looked like recent releases, nothing super old.

Besides that hiccup, I also noted that coolers were near freezing. I'll be getting a basket next time, not letting my hands turn to icicles holding frozen bottles.

Lastly, the only reason that I give service a 4, which is high for not seeing anyone there besides the cashier (well, it was a Sunday afternoon) is the fact that this is the first, FIRST Woodman's to get it right; rows of checkout counters in liquor. Every other store has maybe 2 terminals for checkouts and every time I go, I end up waiting in line for 10 minutes just to pay for a handful of beers. Otherwise the service is minimal at best; someone just to check you out. I will say they've been friendly at both of my encounters, but there really isn't anyone to help customers with their selections.

I'm hoping after the other stores failure in this area, they wised up to understand they'll be flooded with people on Friday and Saturday night. Only time will tell.

I will say that this is going to be my new home store though. The closest location to me with the best selection in the state? Yep. Will I still browse other places in hops of some rare beers to float through? You betcha.

Woodman's Markets in Menomonee Falls, WI
Place rating: 4.28 out of 5 with 6 ratings