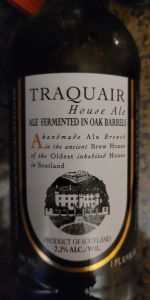 Notes: None
View: More Beers
Recent ratings and reviews. | Log in to view more ratings + sorting options.
4 by cryptichead from Illinois on May 07, 2022

Purchased at Purvis Beer in Richmond, a suburb of Melbourne in Australia, in November 2021.

Colour is hard to describe. Is it muddy brown, or amber, or dark, burnt copper? Maybe all of them...

Aroma has cola, some dark fruits, a tangy caramellyness and some tobacco.

Overall this is an excellent, and given how well it hides its alcohol, possibly quite dangerous, beer. It screams of warm fires, misty walks and fog-bound valleys. Beer as a device for long contemplation is on display in this glass. If this is what the Scottish Lairds were drinking back in the day they fortunate men!

500 ml bottles poured into a tulip

A- A clear ruby red with a two finger tan head.

Perfect example of the style. Well balanced and delicious.

500 ML bottle, vintage 2020, poured into a snifter at 55 degrees F:
L - somewhere between a barleywine and a stout, buttermilk colored head lingered
S - bread, malt
T - flavors of malt, peat, biscuit; the peat flavor adds a sweetness on the finish
F - medium mouthfeel and carbonation
O - very interesting beer, good. This one is fresh, so I'm going to age my second bottle 3 years

Pours a dark brown with a light tan head that dissipates quickly.

Tastes of light toasted malts with a tad of dark fruit in the mix. There is a bit of barrel but you have to search for it and a slight bitterness in the finish. Thin body and mouthfeel, I was hoping for more "scotch ale" but was left wanting it to be more than it was.

500mL bottle stamped BBE MAY 29 poured into thistle glass at just above fridge temp 7.2% ABV. The beer pours light to medium brown in color with reddish highlights and milky, light khaki head. The head recedes to a thin ring and single layer of bubbles. The aroma is faint with rich malt, cocoa, leather and earthy hops. The taste is rich, deeply toasted malt with subtle smokiness. Earthy flavors of leather, tobacco and oak can also be found before a moderately bitter finish. The mouthfeel is medium bodied with average carbonation and a dry finish. Overall, very good. Subtle, balanced and complex.

S: Medium strength smell. It does smell like Scottish malt man. You get some caramel, vanilla, buckwheat honey, figs/prunes/dates and some banana bread. It has quite a bit of musk too.

T: Medium strength taste. It does taste like Scottish malt too. You get caramel, vanilla, buckwheat honey, prunes and banana bread like the smell. You also get leather and oak tannins and some light peat. Coffee on the retrohale. Not a lot of residual sugars and slightly sour like some whisky's can be. A bit mineral. Super old school.

M: Medium mouthfeel with medium to low carbonation. No stickiness.

O: This is a nice blast from the past. Old school flavors all around. Really reminiscent of Scottish whisky's.

Aroma is subtle though expanding, with a deepening complexity of wood and dates sweetened by a milk chocolate undercurrent; apple core, smoked fig, dusted almond, and tart plum skins feature heavily in a secondary capacity.

Taste profile is an even softer and fading profile of oak, dried plum, prune, and apple skin upfront, while woody milk chocolate shows on the back end with a dusty cocoa exhale.

Mouthfeel has a medium body lifted by an almost untamed fluffy carbonation, expanding a cloudy lightness throughout; steadily thinning, though picks up for a more rounded finish highlighting a mild malty grit and an almost spritzy heft from a carbonation still going strong.

Light and drinkable considering its ABV, thought the oak aging leaves plenty to be desired as it holds bar minimum bearing on the profile; decent overall and far from an ale to turn down, just far too passive to progress beyond anything average.

Poured from just under fridge temp. Pours a nice dark brown with a reddish tinge. A good amount of tan head that sticks around for a few minutes. Nose is rich toffee, malts, brown sugar, wheat, and raisins. The taste is super interesting. Not what I was expecting. Definitely not as sweet as the Scotch ales from the US. Almost a bit salty. Definitely some nice toffee, licorice, chocolate, raisins, bread, and a touch of earthiness. A somewhat dry and lighter mouthfeel. Overall, very impressive!


It pours ruby and clear but looks opaque mahogany in the glass with a couple inches of tan, foam-insulation head that descends to a healthy film. Some lacing. Very appealing-looking. The aroma is crusty brown bread, dark fruits, a hint of banana bread without enough bananas, caramelized sugar. It tastes similar but a little different. Bready and sweet with some tea-like earthy bite in the middle, slight mineraly bite and thinness that rounds out a little as it warms up from 50°. This is a nice traditional Scottish beer and I'm glad to have got to tried it. A textbook wee heavy as far as I am concerned. Personally, I could do with a little thicker body and a little more roundness and complexity in the flavor compared to the aroma, but regardless it was very tasty and I thoroughly enjoyed trying it.