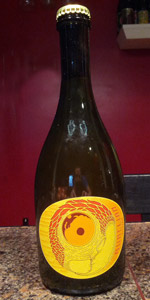 Taste - The initial apricot flavor is perfect and authentic. Then it proceeds to get sour. And more sour. Until eventually, it's just sour. Citrus sourness.

Mouthfeel - Way too sour for me. It masks the apricots. It masks everything.

Pours a cloudy gold with 2 fingers of off-white head that fades to nothing. Aroma is sweet apricots, oak and sour funk. Taste is very fruit forward, the apricots really come through strong with sourness hitting at the back. Medium carbonation, a great balance of sweet fruit and sour funk. Easy and really enjoyable to drink.

It's amazing to me how much more attention these fruited beers get. This is a fine liquid, but some of their standard stuff has so much more to offer on flavor, aroma, complexity, and mouthfeel.

This is very champagne-like, and while I don't have a lot of experience reviewing champagnes, it has a dry bubbly effervescence, with some sweet tang in there as well.

All the flavors marry to the point that it becomes one golden royal potion where nothing really stands out and says apricot, but it's there, in peach, pear, apple and even white grape expressions. The sourness is mildly oaky, tingly and faintly sharp on the swallow--it's so well developed that it really could be put up against some of the best France has to offer, but, what would I know in that regard. I rate beers.

My first review was for the 2015 vintage. I've had multiples since then, but this final review is an amalgamation of all of them, capped off by a blend 4 enjoyed in May 2019.

Blend 2 from August 2014. Poured from a 16oz genie bottle into a Jester King stemmed glass. Acquired in a trade.

Pours a hazy golden lemon body with a substantial but fleeting white head that reduces quickly but leaves a nice ring of foam and very little lacing.

Aromas are great and inviting, and really come out after 40 or so minutes of letting it open up. The stone fruits are present, apricots and lactic tart acidity, citrus and funk.

On the tongue is an initial tartness, but definitely not overpowering which is nice as the fruity apricot notes are showcased without being drowned by acidity, as I've tasted in other apricot wilds. Nice oak and funk notes on the follow through and finish, with a clean dry crisp aftertaste. Slight malt taste in there too. Medium carbonation.

This beer was delightful and a real treat. I really enjoyed the balance of acidity and fruit.