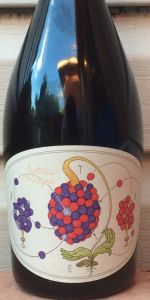 Notes: Synthesis Analogous was brewed with Hill Country well water, barley, wheat, oats, and hops. It was fermented with our mixed culture of microorganisms consisting of brewers yeast and native yeast and bacteria harvested from the air and wildflowers around our brewery, and refermented with raspberries and blackberries. It was packaged in July of 2015 and is unfiltered, unpasteurized, and 100% naturally conditioned. At the time of bottling, it was 5.6% alcohol by volume, 1.003 specific gravity (0.75 degrees Plato), and 14 IBU.
View: More Beers | Place Reviews
Recent ratings and reviews. | Log in to view more ratings + sorting options.
4.19 by ScottP from New Hampshire on Apr 17, 2021
4.38 by Ben1313 from New Hampshire on Apr 17, 2021

Would I buy this again? Definitely. This Jester King offering is way to rare to not have it if you can get it.

That said, both fruits (raspberry & blackberry) are very subtle throughout. The sherry barrels are more noticeable on the nose then the fruit.

Fruit is present in the taste & smell, but not overly noticeable - which is reasonable considering both fruits were on their second refermentation for this beer.

Hazy without any sediment, the color is consistently dark salmon from top to bottom, with a fizzy off-white head that settles to nothing but a thin ring.

Smell is seedy blackberry and raspberry with softening peach and cranberry that are all nearly overtaken by an intensely complex oak presence that is like heavily roasted pecan, almost maple-esque. At the very back end is a hint of stinky cheese.

Synthesis is surprisingly juicy and jammy for a Jester King beer--I don't normally get that characteristic from them--but also sharply tart and deeply black peppery. This intense oak flavor is a very complex and completely appreciated contribution from the Sherry, which is still coming across as roasted pecan to me. Gummy apricot and notes of caramel corn-esque pie crust arise as it warms. The specific notes of raspberry and blackberry don't actually come through distinctly in flavor, but this is unbelievably drinkable for a fruited Jester King sour.

Pours a lightly hazy, light reddish-pink with a one finger white head, nice lacing. Fair retention. As you'd expect, this is a pretty beer. Smell is a rich raspberry sweetness with a tarter blackberry-like tartness, light hay, dark fruit, mild lactic acidity, some minerality to it. There is a ton of fruit here, and the aroma is akin to Atrial Rubicite, but a bit more complex. Really a nice fruit-forward nose. Flavour pulls back a little bit on the fruit, in favour of a more dry saison-like vinous, earthy and grainy wheat-like character. Raspberry jam sweetness is perfectly complementary here, but there is a big, big acetic bite on the backend that isn't so much tart as it is sour. Somewhat unexpected, given that Jester King loves their 1.000 final gravity designations, but very welcome. I'm guessing the sherry barrel is mingling in with what I am perceiving to be the fruit flavour. The blackberry isn't really anywhere to be found, perhaps the tart character is from the blackberry. Mouthfeel is lighter bodied, refreshingly sour on the finish with a rolling fruit flavour that lingers. A really nice treat from Jester King, and a damn nice fruited wild ale to drink on a summer evening.

T: It really holds up to the nose, and probably even better. Jammy berries that are balanced with the sherry, funk and oak. So complex and incredible.

F: Light and subtly effervescent with a great dryness on the end, not sweet at all.

O: I don't think there's a better JK beer out there. The complexity of this is incredible and reminds me so much of lambic. The sherry barrel in unique and very awesome and is goes perfectly with the fruit. Better than Sherry Atrial.

Finally getting around to trying this one: pours a slightly hazy coppery color with off-white head. Berries, funk, tartness, and some light yeasty notes on the nose; follows onto the palate. Light bodied and fizzy. Finishes with jammy berry flavors along with a nice slight tart note.