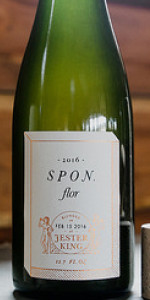 A: Body is yellow to orange with a cloudy base that's not too opaque nor too crystalline. Head is 2mm thick living just to the sides of the glass.
S: Aroma is powerful on flower and herbal notes, having just a slight hint on acidity and lambic type aromas. It's just so delicate and so soft. It makes me drool.
T: Taste starts off with a citrus tone of lemon zest, lime, moving on to a sour touch that's just delicious. In between, you get floral and herbal notes that complement the beer in an incredible way.
M: Body is medium, carbonation is still spot on even after 3 years of bottling, and sourness is mild and delicious.
O: Please, keep feeding me this.

You can tell the fermentation on this beer is real and not an inoculation. Tastes like a natural lemonade while being in a field of wildflowers. Clean and crisp with a tartness that complements the beer. Excellent.

375ml bottle, cap and cork, 2016 vintage. Served in a stemmed glass. Pours a slightly cloudy golden-orange body with a one finger thick and effervescent white head with appropriate retention, minimal lacing, thin collar. Smell is a wonderful bouquet of oak, mineral and leather; the overall funk gets somewhat closer to the funky complexity of Gueuze. There is lemon, a bit of grainy sweetness as well as a bit of stonefruit. Great complex aroma. Flavour is quite a bit like a Resurgam type; mild-moderate acetic acidity, lemon, stone fruit, moderately heavy oak, minerals with a bit of leather on the finish. One of the more complex wilds I've gotten to try. Mouthfeel is medium-lighter bodied, good carbonation, refreshing in its complexity. Overall, a very nice wild ale with a great funk on it; presumably this is from the greater competition and diversity of the microflora based on the bottle description. There is more oak flavour then expected, but I don't get any sherry notes, as hard as I try to look for it, but it makes sense that there wouldn't be.

A: Appearance is very much like regular Spon. Hazy, golden orange color with a very minimal white head.

S: Nose is light here, but some nice citrus and a bit of wine like fruitiness. Not as much funk as Methode Gueuze.

T: The taste blew me away, though. Everything in the nose is amped up to 10 here. Tons of bright citrus, oak, red wine like fruitiness that's reminscent of sherry, some funk. It's almost hard to describe because there's just something incredibly special about the way this tastes. It's reminiscent of Zenne y Frontera, quite different but somewhat familiar.

O: This is a very special beer. While it reminds me of a few other beers, I've never had anything like it. I hope they're able to recreate this beer again in some shape or form, but it's not likely due to how it was created. Can't wait to see how this develops over time. Will be opening a bottle soon, will note if anything changes.

Subdued slightly cloudy golden yellow in the glass. Some intermittent bubbles on the surface and a small white ring of head remains. Aroma is reminiscent of an old library, musty, funky. Taste is tart, although not as tart as the regular Spon, with a musty and strange yet alluring complex oak and fruity quality, which continues through to a dry mouthfeel linger.

Overall, this is a wonderfully strange brew and one that seems like it could be a prime candidate for extended aging.

Again, we had the pleasure of having this on the August 2016 Jester King cruise. I saw that the first Spontaneous blend was added here during GABF, so I suppose it's time for me to transcribe the notes I took for Blend 2, which was tentatively named Spon Flor--"spawning" from the fact that it is a spontaneous blend of local flora. It was also known as Sherry Flor as it was aged 24 months next to a Sherry barrel, which they believe actually produced some unexpected but fortuitous results.

Appearance is hazy gold-peach, with a frothy peach film that almost behaves like active algae.

Smell is both peach and Sherry, sharp and bright. The nose gets a little hotter as it warms, clearly from the Sherry-like influence. Some olive blooms as you get closer to the bottom of the bottle and glass.

Taste is a very well blended tangerine-peach champagne, sour, tart and sharp. Oak develops as it warms, as well as graham and sourdough crust.