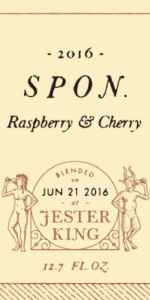 Notes: 2018 SPON Raspberry & Cherry is a blend of one, two and three year old 100% spontaneously fermented beer refermented with raspberries and cherries. For our 2018 blend, we selected two puncheons of SPON from 2014, two puncheons of SPON from 2015, and one 225 liter barrel of SPON from 2016. After creating the blend, we refermented it with 960 pounds of raspberries and 840 pounds of Balaton cherries. According to our HEAD BREWER AVERIE SWANSON, the cherry character of our 2018 blend is more prominent compared to our 2017 blend.

2017 SPON Raspberry & Cherry is our 100% spontaneously fermented beer, refermented with cherries and raspberries. We blended four SPON barrels from 2016 (about 1,500 liters) and added 800 pounds of Washington raspberries and 800 pounds of Michigan Balaton cherries. Like 2016 SPON Mourvedre & Sangiovese, we allowed the beer to referment with the fruit to dryness, then naturally conditioned the beer in kegs and bottles resting on their side.

A balanced, fruity-yet-tart treat; not mind-blowing, but flavorful & easy to drink I'd certainly have another!

Super sour, like Warheads candy levels. Good amount of cherry and raspberry in the nose. Cherry is more upfront in taste, with raspberry being a tad on the back.

Super fruity, really sour, and finishes dry. I really love Jester King, so maybe I'm a bit biased here, but this is a good offering for sure.

i am feeling quite spoiled, as this is my third fruited spon beer in less than a week! lucky me. its an embarrassment of riches around denver right now with the gabf going on and all, feeling stoked and blessed. this is a killer edition of this, and i think i like it better than the grapefruit, the fruit is incredibly forward, but either there is enough tartness to it, or it has been fermented dry enough, that this still tastes like lambic to me, an element of maturity, complexity, and funkiness that didnt show through quite as well in the grapefruit edition. the fruit is also enormous in here, more than the grape edition i had recently as well, which i found to be kind of subtle. this has a blood red color to it, a high shine, and just a short head from the tap. aroma is striking, with an almost head jerk reaction to the funk and sourness in here, equal parts tart cherry and raspberry, and bacteria derived acidity, which puckers me right up and makes my mouth water instantly. also plenty of oak evident, a medicinal thing to the fruit, and some well developed wild brett element. the flavor is all of that, with both the cherries and the raspberries being about equal and extremely intense. because of that, this is sharper and more sour than any of the other spon beers i have had up until now, but its not too much, there is good body and fruity sweetness at the right instance to round this out a bit, and the funk at the end is straight lambic, just awesome. overall i thought this was stellar, one of my favorite of these so far, incredible beer, so glad it came to colorado this week!

Bottle date 6/21/2016. Pour to tulip, garnet/ruby red, light pink foam, no retention or lacing as expected. Nose is bright fruit, almost candy like, dominated by cherry. Taste follows the nose with lactic tartness. Raspberry hints but plays second. As much as I enjoy the fruit, the SPON base is lost to it. During travel beer traversed the cork, so I am very thankful these were stored upright. Maybe sideways would have kept the cork wet, but I prefer to avoid cork taste in beer over the ling term.

Overall this is nice, but the cherry flavor is borderline medicinal. Maybe needs a few years to cool off. Nice spon base beer underneath, but the cherry just doesnt hit the spot for me

375ml bottle. Served in a snifter glass. Pours a dark reddish body, slight brown hue, light pink head, good retention, no lacing. Not much of a collar, ultimately. Smell is a rich raspberry jam and cherry tartness. The fruit is heavy here, no doubt about it. It is a fairly fruit-forward nose, a light oak astringency. Not noticeably funky. Light seediness. Flavour is more interesting and complex; the raspberry, when so strong and prevalent on the nose, is not as big of a player here. The cherry skins are more notable and distinguishable on the palate than it was on the nose. Also, there is more of an oaky astringency and minerality to it, which perhaps may be related to the spontaneous fermentation process. So as a whole, this turns out to be more of an overwhelmingly seedy raspberry nose with a fair cherry skin tartness combined with oak and minerality on the palate, very dry and oaky. Moderate acetic tartness. Mouthfeel is medium lighter bodied, well carbonated, very dry and oaky on the finish. As far as American wilds go (and that's what it is, no matter what they brand it as), smell is excellent and it is as if the fruits have decided and divvy'd up their contribution to the overall beer. That being said, I think Atrial and Montmorency vs Balaton are better AWAs. Bottom line, seedy raspberry on the nose, cherry skin with a dry oak on the palate, moderately acetic without being very sweet at all.

Pour at the brewery

L: Shimmering red very light carb,
S: Funk, raspberries, cherries, little bit of cinnamon
T: raspberry up front with cherry coming through on the back. a bit of cinnamon in the taste as well along with a good amount of funk
F: Very very jammy, coats the mouth
O: Probably the best beer I've had from JK sans b1 Atrial this beer is pretty close to perfect.

A: Deep, yet bright red hue. Looks like cherry and raspberry juice. Off white, slightly pink head that settled to a thin ring by the time I sat down.

S: Nose is fantastic. Intense raspberries and cherries with some funk. Very similar to Atrial or MvB. Getting a hint of cinnamon as it opens up.

T: Taste is very much the same. Not really getting the hint of cinnamon, but optimistic of it with time. Jammy raspberries and cherries, yet a bit more balance to it with the heavier oak and funk compared to MvB or Atrial. This tastes very much like Hommage or fresh LPF to me. There is a bit of a cheesy funk on the back end also similar to the last LPF bottle I had, but I think that will clean up.

O: This is awesome, and turned out to be most people's favorite just due to the fruit. Will love to see how this develops, if the faint cinnamon strengthens and if that bit of cheesy funk transforms into something a bit more refined. Will open a bottle soon and note if there are any differences.

We were fortunate enough to also get a glass of this at the last session of the Shelton Brothers festival, which pours bright red-purple, fairly wine-like, with a faint white film that dissipates entirely.

I'm getting a lot of callbacks to Montmorency Vs Balaton--having recently had it multiple times, it's fresh in the memory banks. This is not all that different, which speaks greatly to what Jester King was already doing with their stellar fruited sours to begin with.

The cherry funk is all over the nose with that cinnamon and marzipan that is readily apparent in MvB, as well as the 3F and Cantillon Krieks.

I've since had an April 2018 bottle on January 1st 2019, and found the experience to be fairly comparable to the above, but also far more balanced between the two fruits. There is much more raspberry flavor, which comes with a spritz of lime. It also had a far more substantial, pink head that retained as a thick collar throughout. Either way, it's remarkably smooth and delicate for a wildly fruited spontaneously fermented beer. Excellent!

Pour is raspberry puree, beautiful, striking and deep purple/red with a small 1mm white ring sitting on top of some nice sizzling carbonation. Aroma is fresh raspberry and cherries, the raspberries maybe come through more than the cherry, but it's hard to tell. Some slight funk, but barely detectable through the heavy fruit.

Taste is a red-fruit explosion, jammy, full and juicy, really not overtly sour or acidic as expected. The mouthfeel is sizzly and crisp and the raspberry and cherry linger.

Overall, awesome. This is Texas Hill Country fruited lambic, can't wait for the next round of fruit variants of Spon. I'm sure there will be more after tasting this.

SPON - Raspberry & Cherry from Jester King Brewery
Beer rating: 93 out of 100 with 83 ratings