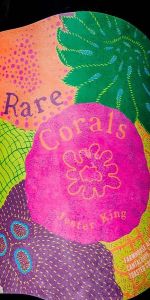 Flavor: The flavor is very fruity, and moderately tart. I think I can taste cantaloupe, banana, strawberry, coconut and chamomille.

Body/Overall: medium body, it's a delicious fruit compote and a nice surprise, delicious

On tap at the new Big Owl Craft Brew House in Houston.

A: Pours slightly hazy. A yellow color, with a small white head that forms. That fizzles out to nothing quickly, and just spotty lace left behind.
S: An acidic fruit aroma up front. Not much else. The fruit is all muddled, I guess banana and melon...sure I'll go with that.
T: Like the nose, all the fruit is just muddled. I can't pick anything out, I guess a mix of canteloupe, guava, banana, strawberry if thats what they say. Though if becomes very sticky and sweet. A hard candy like sweetness takes over which makes this cloying.
M/O: A medium body and moderate carbonation. A sticky, resin, sugary candy coating covers the tongue. OK to drink, in that generic store bought fruit juice kind of way. Though not at all what I'm looking for in the style.

The delicate balance that I love for the style is nowhere to be seen here. Its just a muddled fruity sickly sweet mess. Which I can't really pick out any of the individual fruit additives, but thats got to be what I'm tasting right? Jester King is very hit and miss with me, and this is a definite miss.

I had this on tap at the Jester King Brewery and I will say in short that this is a world class saison. The added flavors of coconut, lime and camomile blend seamlessly into the flavor of this light highly drinkable beer. I really didn’t taste mango. I was surprised how good this was with just a little bit of tartness and enough flavor and substance to make the beer one of the best saisons I’ve ever consumed.

Had on tap at Pkwy Tavern-Summerlin, Las Vegas, NV.

Looks more like a NEIPA than saison. Strong spice aromas, not much malt or yeast, but spices are fresh and inviting. Dominated by something exotic I can’t place—chamomile? Flavors are tart and focused on the same spices. Not much else going on. Thinnish body with moderate carbonation. Hops bitterness is augmented by slight tartness and a bit of astringency, apparently from spices. Jester King is one of my favorite producers and I love their unusual, funky beers, but this one misses the mark for me. This is not an outstanding beer to me, but it is still refreshing and drinkable and different.

Looks like a pear/orange juice in the glass. Head quickly fizzes out to a thin ring leaving no lacing.

Upon tasting, the word that comes to mind is quality. This is a meticulously crafted beer. The lime juice is subtle. Camomile comes through. There is a light sweetness from the mango. A very slight oily finish which may be from the coconut. The end manages to be both dry and make the mouth water. Having said that, to this palate anyway, it is just pretty good.

Overall, a unique and interesting beer. Hard to find the saison here, but leaves me wanting to try a lot more from this brewery.

The pour is mostly clear burnt gold but it fogs up slightly as a minimal white blanket fizzles out to nothing just as quickly as it surfaces.

In aroma, a hint of chamomile pairs well with the wildly spicy and woody Jester King funk that's slightly peppery and almost cinnamony, but is brightened by hints of lemon, strawberry and guava, and accented by a pinch of herbal toasted coconut.

Taste starts with spicy Jester King funk, but it's lighter than normal and instantly makes way for the wacky melange of fruits and spices that are at play here. This is the first saison, or even sour or wild beer of any kind that I've had where the flavor of fresh banana actually comes through after having been added. It's mild but presently there, as an almost creamy just ripe banana, with just enough accent of strawberry to start you off by giving that classic strawberry-banana flavor. After it becomes a little more tart, the lightly earthy cantaloupe counters the banana but plays well with it, which is aided by faint coconut. The only thing I'm missing is the guava, but there's plenty else going on here.

The biggest knock here is the light body that's nearly watery, but it has a crisp carbonation before a lightly powdery dry finish.

I had batch 2 in March of 2020, and continuing a criticism from above, found it to be too light but almost water. But also, the flavor was a little odd and unexpected, with a lemon-lime dominance sort of tainted further by overwhelming notes of ginger. It was very weird for a Jester King, to say the least, and one of the least enjoyable beers they've put out. I'm reducing my rating of this beer overall as I don't think most people will ever get ahold of batch 1, which wasn't all that great to begin with.

Poured from a 750 ml bottle into a tulip glass after 5 months of aging. Appearance is a moderately hazy yellow and light brown color with 1/2 finger thick head. Smell is a good balance of funk and delicate tartness with notes of guava, banana, strawberry, toasted coconut, and hay/oats. Taste has a good amount of Chamomile with guava and banana rounding out the flavors nicely. Strawberry is present and a hint of toasted coconut, but it was difficult to pick out the cantaloupe. The cantaloupe, guava, banana and chamomile seemed to blend together into a unique flavor. The toasted coconut was more noticeable in the aroma. This beer is fairly dry (less sweetness than expected) with a decent amount of bitterness. Mouthfeel is fairly light and effervescent with a nice tart finish.

Overall, this is a delicate and drinkable tart farmhouse ale that has the typical funk notorious of Jester King. There were so many flavors added that I had no idea what to expect. Instead of getting a fruit/tea bomb, the adjuncts add a delicate and somewhat complex flavor to the base saison. It will not blow you away and is a little more bitter than I prefer, but Rare Corals is a delicious and drinkable tart farmhouse ale. I would open this soon if you're sitting on a bottle. There is a good amount of tartness after 5 months, and I imagine that this would drink well with significantly more age. However, the balance is good now, and the adjuncts will fade over time.

Rare Corals from Jester King Brewery
Beer rating: 88 out of 100 with 30 ratings