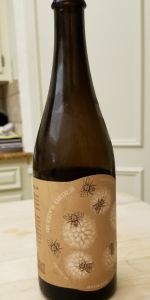 A creative saison from the American crafter who should win that prize... if they haven't already.
There has been an explosion of saisons... adding over 2000 on BA in 7 months this year, by my recollection.
Clearly, a lot of micros are getting into this; many faster than they know how.
Jester King should be their model. I'm impressed by the 4 I've had from them. (I'd have more, but I'm shy about price.)

This Queen's Order was brewed April 2018, this may be on the downside for light-bodied saisons; but I didn't notice deterioration. A lively brew.
Looks are no indication of the sophistication to come. Smells are modestly summery, the lemon is clear. But this saison does not come together until it touches the lips and, then, it is integrated from beginning to end. The attack is hoppy, citrusy. Then the sweetness from Texas honey, then a refined yeast works on a malt bill of mostly local barley then a nice blend of oats (soft) then the rougher flavors from the ancient grain of spelt. Finishes dry, but somehow all ingredients sit on my tongue, asking me to figure out what I've drank.

If a brewer is going to vary from the classics in the style as much as Queen's Order does, then the brewer should know what they are doing. Jester King started on the saison. It is a flexible beer that goes well with food. Wilds and other styles came later. They may well be the master of the creative saison. Queen's Order proves my point.

I went on Jester King's website for the first time and am impressed all over again. Sort of a Napa Valley ambition in a Texas setting and with the sophistication that could rival the California Cuisine... from 1970. That's not a put down, it is just to say... thanks to Austin for making such progress possible.

Really enjoyed this, and would make an excellent food pairing beer. Is crystal clear (when poured gently) with a nice full head. Brett, honey and acidity present on the nose. The Brett flavor is a bit overpowering at first but really mellowed and became very complex as the beer warmed and opened up. The thin dry body is very suitable to a table beer especially one brewed with honey.

a really awesome beer here, not sure why the ratings are as low as they are, i have been super impressed by all the jester king beers i got to drink while i was in texas, and this one is among the best of them. its brewed with honey and lemon, which on the label made me think of tea, but its not like that, its not so medicinal as i thought it might be, sunny yellow in color with a nice soft frosted haze look to it and a tall and wispy pure white head, attractive to say the least. carbonation tickles my nose when i inhale deeply, fresh floral honey, pollen and wax, comb and all, very raw to me, but also delicate, mild compared to clover or orange blossom honey it seems, although i do not know this specific guajillo honey at all. the lemons are subtle, and actually seem to add some finishing bitterness to the flavor, more zesty freshness and pithy better than juicy pucker, which makes sense here, especially with the classic jester king wild cultures, which give this a nice funk but also some tartness on its own, light and dry and refreshing to drink, with what seems like a wheat and pils type malt base, dry and cereal forward, but out of the way. the honey is flavorful for how dry this is fermented down, and the whole thing is breezed along by spirited carbonation, summery and refreshing and wild enough and delicate, mature and awesome. no wood to me, must have been done in stainless. killer flavor balance and depth, nice marriage of flavors. man i love jester king!

L- Hazy straight straw colored beer with a small frothy head.
S- Yeast, hops, sour lemon and phenolic yeast. Nice on the aroma. Maybe a little spice. Rudimentary, but nice.
T- Slight, almost honey sweet followed by some lemon, spice and yeast. Bitter and very organic/earthy back bone.
F- Good and dry bitter finish per usual.
O- Although this is a very well made saison as usual from Jester King, I have to admit this one is the least memorable I've had by far. A little too toned down in my opinion. Don't get me wrong its masterful work but it's not at their full potential.

I just had Queens Order a Saison from Jester King, one of my favorite breweries in Texas. It was pretty good but it had a little bit too much Brett funk for my taste and felt a little thin.

The aroma is a very nice, full of honey. Thats where the good parts end. The body is thin as water, the flavor is straight brett brux, and the beer is dry like sand. Overall very meh

Got this one at the great Sunrise Mini-Mart in Austin,TX. Starts off fairly decently with a refreshing tartness and hint of honey but the finish is a bit to bland and watery. Need to develop the flavors a bit more on this one boys.

Pours a cloudy/hazy pale straw yellow color with fizzy white head. Funk, light tartness, and some citrus on the nose; follows onto the palate but very blandly. Smells better than it tastes. Light bodied. The honey comes in a little on the finish, but more grain notes dominate.