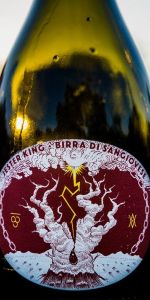 This has an exceptionally woody funk that exhibits almond and walnut, most intensely on the nose with even some barnyard, blue cheese and a hint of red wine vinegar, but taste features more tart, mature red grape with a dry, peppery tanin and a tingly carbonation through the medium body.

Definitely one of the more difficult JK fruits Ive rated.

This beer is as close to a red wine that I believe a beer comes.

Absolutely no head or head-retention. Visually looks like a red wine. I find this appealing, but others may be let down.

Smell is present; though subtle.

Tastes great, but Ill admit - I downgraded the Taste score because I think those that approach this beer still expecting a true sour/farmhouse ale will be disappointed.

If there ever was a beer that would get me into wine, this would be it.

A - Poured into a Kate the Great tulip a nice clear almost rose hue with a thin white head that fades to leave light wisps.

O - Overall this was a rather underwhelming beer. Was expecting way more from Jester King. Not really worth the hype.

Overall not bad but not nearly what I expected

really special stuff, never had a beer that didnt totally turn me on from the small bottle from these guys, and this is no exception, although i immediately have to comment that it doesnt hold a flame to the tempranillo edition for me, which stands as one of the best fruited wild ales ive ever had the pleasure of drinking. i have to forget that one in order to fully appreciate this one, which is far more subtle on the fruit, and definitely a little sweeter. i think that is a reflection of the grapes themselves though, this one a bit more delicate, with notes of rose wine, cut flowers in full bloom, and clover honey. i love a sour wild ale that has some sweetness to it in the right place, and the grapes surely provide that here. jester king to me has easily one of the most recognizable yeast profiles in the game, right up there with jolly pumpkin, and its on full display here, although enhanced a bit by the oak, and seemingly a bit more mature and developed than some of their stuff, but i could pick this out of a crowd as a jester king brew. the fruit is great in here, coming on more and more as it moves along, always more grapey than winey, which i think is a cool feature. it has subtle raspberry and plum attributes, and does for sure have a little flattering residual sugar. lambic funk, fruity freshness, and a very italian sort of flare to it, the grapes make this something very unique and special, but still, the tempranillo one they do just seems to have so much more fruit character and intensity to it, and holds a special place in my heart. i hope they keep them rolling though, i picture a 20 bottle lineup with all sorts of special grape editions from around the world...

L: clear red, very short head maybe 1/4-inch tall but eating away itself like a gose head and gone in seconds; keeps no collar; color and clarity are stunning ... a beautiful crimson

S: vinegar, some earthy yeast, light hint of meaty red wine to start off with; as it warms the grapes start sweetening and turn into a red grape/blackberry yogurt or cheesecake

T: first sip is like chewing on grapes *and* the grapevine the grapes are on at the same time ... sharply tart red grapes and an earthy something; as it warms just a hair already the grape flavor turns much sweeter ... rapsberry, raspberry tart

F: light, lightly crisp ... not as much carbonation as I expected for a Jester King beer, but it's a relatively young bottle (three months) by general JK farmhouse standards ... probably could've used a bit more time to condition in the bottle or maybe it's just a tad soft ... either way it's still very nice

O: tried 8 oz. on draft at the brewery last weekend, and from the first sip to the last I was convinced it was better than Atrial Rubicite ... the grapes were bursting, the mouthfeel was absolute JK perfect, and I had no choice but to buy at least this one bottle; glad I did — though it's a much drier, softer version, it's still got that wonderful grape flavor and sweetness mixing with some of JK's barn must; I'm making my scores kind of an aggregate of the two experiences but the bottom line is it's fantastic either way ... instantly my favorite grape beer by JK of the three or so I've tried and one I'll drink/buy each chance I get

Very similar to the Syrah. Raspberry red color. Grapes and tannins. A bit more flavor and fruit in this one so I do like it better. A bit more complex as well.


Birra di Sangiovese from Jester King Brewery
Beer rating: 93 out of 100 with 41 ratings