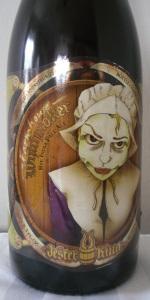 Flavor of lemon citrus over grassy malts, some herbal notes, and a dry rye and hop bitter finish. Some funk aftertaste.

This is very tasty and the rye addition really adds a unique balance to the farmhouse elements. Definitely worth trying. Mine has some age on it, but this might have been even better a little fresher.

3.95/5  rDev +2.6%
look: 4.25 | smell: 4.25 | taste: 3.75 | feel: 3.75 | overall: 4
This one a gift for my good friend Tim Flanders. Thanks brother. Pours a hazy pale amber. Nice streams of effervescence rise from the bottom of the glass. Head formation is a little sluggish in the first quarter of the pour then explodes. It's difficult to keep it from over running the top of the glass regardless of how gently it is poured. Off-white/eggshell, finely bubbled, foamy and lasting the head slowly recedes leaving a dense island mound of surface cap and a thick collar ring with 3/4's inch of clumpy lace above the collar. Aroma is faintly acidic with a tiny hint of sour, rich wild yeast funk, cereal, rye bread and rye spice, aromatic orange, pine and earthy hints. Taste is earthy rye/rye spice, bread, citric and pine with subdued tropical hints wrapped up in wild yeast flavors. Not sweet or sugary it has a sugar graininess. There is a Brett-like note. Finishes light and dry, fruity and grainy. The aftertaste is mostly hop hints, rye spice wild yeast. Mouthfeel is light-medium bodied with high carbonation, dry, prickly, mildly astringent with a pleasant liveliness.
Jan 06, 2019

Reviewed by GrumpyGas from Illinois

Aroma is tart, fruity, and funky.

Flavors match adding rye and pine, with citrus pith and peel and includes a bready maltiness. There is a lot going on here, but I don't think they all get along with each other.

Mouthfeel leans full and filling, but clears the pallette cleanly

Overall it is a well brewed ale but not my style.

3.85/5  rDev 0%
look: 4 | smell: 4 | taste: 3.75 | feel: 4 | overall: 3.75
Poured a cloudy, yellow body with great head and lace patches. Slightly spicy and funky with a noticeable yeast strain in aroma. Not too hoppy but you can detect the citric and floral hop notes underneath a funky saison in this fuller-bodied beer that has a crisp finish. Good balance, not the best beer as it seems the styles' characteristics seem to mildly clash but it's alright.
Jun 22, 2018
Rated: 3.75 by atlbravsrno1 from New Hampshire

Reviewed by weareallfalafel from Virginia

4.88/5  rDev +26.8%
look: 5 | smell: 4.5 | taste: 5 | feel: 5 | overall: 5
Batch no. 17, bottled 5-04-17, 5.9%abv. Pours a bright hazy golden color with a half inch of fairly stable white head that falls somewhat quickly, but leaves some lacing. May just be the lighting in this hotel room, but the haze and color of this beer is perfect. Smell is a tad faint, but you get clear notes of funky yeast (kinda like mushrooms, I suppose) and the hops which come off like citrus pith and zest. Been loving that funk+hop combo recently. On the palate, you definitely get bready character first. Then the peppery rye and some of the funky Brett. The hops come in quickly, but don't dominate over the funk or the rye, but instead plays really well with the other flavors. Really loving the complexity there. Feel is light in body and feels a bit sessionable with a beautifully dry finish that I expect with a farmhouse ale. Overall, i absolutely love this one. Great complexity without being overly complicated, with plenty of all the characteristics I wanted and expected. I can't see this doing anything but getting loads better with age too, but alas I can't afford to fly this back to RVA with me. More funky Brett and rye character than I'd expected, in the best way possible!
Jul 28, 2017
Rated: 3.57 by Grackos from Florida

S: Notes of tropical fruit and funk from the Brett, a piney and slightly floral hops with a nice Rye spiciness underneath.

T: Notes of tropical fruit and funk from the Brett, a large amount of pine and some floral hops, toasted malt, mixed with a nice Rye spiciness. Very easy drinking beer.

O: I really like how the Rye mixes with the hops and Brett.

Up front - this was consumed Nov. 4, 2016. My local bottle shop got it from the distributor approximately a week previous to that. It was dated as being bottled just over a year before that. Whether or not this should hold up to age is a question of whether you believe it to be more of a Farmhouse versus an IPA, I suppose. Either way, I bring it up since I believe the brewery has a responsibility in selecting its distributors well.
On with it...

S: Barnyard earthy funk that I'm assuming is largely due to Brettanomyces. Resin and grassy hops have stuck around through the last year. Light citric tartness over bready malts that do not have caramel to them.

T: Funk (almost certainly Brett) up front, with lemony lactic acid and tartness. Grapefruit, grassy and mild dank hop flavors. Some mild bready malty sweetness, though this is only a small component. I don’t really get anything much that suggest rye, aside from maybe a little toastiness to the malts. Grapefruit rind and more funk in the hang.

O: Not bad, but this is not my favorite Jester King beer nor sour IPA by a long shot. The funk is decent, but I think I’d like it better if either the sour or the hops were more present. Still, decent.

Reviewed by narwhal from Texas

4.09/5  rDev +6.2%
look: 4 | smell: 5 | taste: 4 | feel: 2.5 | overall: 4
Batch 16 - opened just about six months after the brew date. 750ml bottle into pint glass.
Let's start with the best: the aroma is absolutely fantastic. This is a beer to sniff before you quaff. Just a wonderful mixture of rye notes, fruit, sour, and pine. On second thoughts, don't sniff, inhale.
The taste is flavorful, a typical rye IPA with a slightly higher than average yeast component.
The one downside - as everyone else has noted, really large fluffy head (not my thing, maybe its yours), and under-carbonated to my palate.
Another very solid offering from Jester King, and farmhouse style to boot so you can let it sit. Now, I wonder if I drank it too soon - might leave the other bottle a few more months...