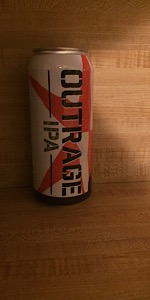 4.19/5  rDev +4.5%
look: 4.25 | smell: 4 | taste: 4.25 | feel: 4.25 | overall: 4.25
Picked this up about a week ago at Gary's in Madison as I had never been there before. Never had a beer from Crossroads either as I was fortunate enough to find this there as a single can. This felt like a cross between something from the Left Coast and a British Pale Ale because of the mouthfeel and hops with the end result being something was easy to drink, enjoyable, and somewhat unique!

Interesting pour to this as quite a bit of foam burst out from the can once I cracked this open as it flew down the side of the can an onto the counter. Once that settled, there wasn't a lot in the glass as I poured this out as this had a nice, coppery hue to it that was bright and full of fine bubbles. A solid wall of lacing was left in my pint glass from the middle on down with some denser "rings" discernible among the lingering suds. Lots of pine, grapefruit, dry and floral British-style hops, and a hint of caramel in the nose a the taste was waxy and had some tea-like spice in it. Easy to feel the Maris Otter and Crystal Malts as they nicely balance out the five hops as the Cascade and Amarillo made this feel like it was from California. Obviously, it wasn't but it easily could have been given that it wasn't like the IPA's common to this neck of the woods!

The right amount of booze was in this as the soft warming sensation I felt complemented the taste nicely and there was enough cracker to the body and carbonation on the plate that this was equally balanced and light on the palate at the same time. Stamped with "BATCH #16720" on the bottom of the can, I'd prefer a traditional date instead but there wasn't any sediment and there were hints of fresh bud in the aftertaste along with a gentle bitterness and lingering burn in the back and a oily stickiness on my lips that left me wishing for another can. Love the label and the liquid inside equally as this would make a wonderful go-to IPA that was a far apart from the dank juice bombs that come from these parts!

Notes via stream of consciousness: I'm pretty sure I've had the Outrage on tap at the brewery before but I either didn't take notes or lost them. Of course what does that matter? I'm sure they've done an excellent job at canning it, and I hope that it's fresh. Let's see... it's poured a very hazy amber-orange colored body beneath a good sized head of yellowish off-white foam. The aroma combines citrusy and earthy/piney/spicy hops with a bready and gently caramelish malt base. On to the taste... as expected, it's exactly as the aroma suggests. I'm getting a pleasant note of orange from it, and there's some grapefruit and a touch of lime as well. It's floral and softly piney, and it finishes dry, earthy, and spicy along with a solid bitterness that lingers for some time. The alcohol is kept in check, and it's not at all harsh despite the solid bitterness. It's solidly put together and nicely balanced, combining English and American styles. In the mouth it's medium bodied and crisp with a standard carbonation. Overall it's quite nice.
Review #7,028

Reviewed by osheamatth from New York

4.02/5  rDev +0.2%
look: 4.25 | smell: 4 | taste: 4 | feel: 4 | overall: 4
First taste of an Outrage and it didn't disappoint. Laced beautifully in a pour in a pint glass with semi haze and a rich golden amber color. Plenty of pine needle citrusy hops and fruits like lime and grapefruit on the aroma. That follows in the taste with added sweetness balanced with that overpowering pine. Some burnt orange as well. Finishes bitter but in an appropriate way.
Sep 09, 2019
Rated: 3.79 by Rhettroactive from Virginia

Reviewed by cavedave from New York

Lightly cloudy, gold, topped by persistent head that starts as white whipped cream two inches high and relaxes to a thick topper connected to wallpaper lace that hangs for the ride. Man, that is as good a look as a IPA can get (even better when realization dawns that this is a IIPA)

Bitter orange and grapefruit pith hit first in the medium strength aroma, but subsequent sniffs reveal sweeter citrus notes, dank bud, crisp grain, sweet crackery grain, and even a bit of a roasty note that comes across as nutty. Very alluring. As it warms peach joins the bouquet.

Taste starts with expected citrus notes and dank bud from the aroma but they are joined now by strong herbal bitter notes in this full strength taste. No peach, and the malt notes are on the crisper side with minimal sweet or crackery. There is a nutty undernote that is very delicious. This is an outrage, in a good way!

A: A brightly colored pour, almost orange soda like, stands out in the vessel with a sticky capping that was bready in texture and dirty cream in color. A strong effervesce witnessed within, even behind the dense juicy haze nature of the drink. Beautiful N.E.I.P.A. coloring with a full glass lace dressing.

S: Touch of sour citrus on the opening nose, hints of musky tropical and grassy hops. Piney-orange resins are semi-dry and abundant along with some crisp british biscuit malts. A very low awareness will be my only gripe really holds this back, but still a very good blend of aromatics from the 5 hop additions.

T: Sticky hop resins of pine and grapefruit are a pleasure on the tongue. Spicy dry orange liquor, wet pine, and some dark pungent hops along with orange peel and hints of rosemary spicing. Woodsy, spicy, lemon with some dank sticky hop resins and pungent musky floral (reminds me of Columbus) give this a bountiful flavor.

M: Dank and sticky hop resins are all that need to be said. Close your eyes and you can imagine the tropical-citrus resins clinging to the tongue in a thick and heavy nature. A lingering bitterness of dank lemon flowers on the swallow along with some alcohol warming that is gentle on the fade.

O: Lots of dank and spicy hop resins provide a flavorful and bittering paradise from the 5 hop blend. Musky citrus, pine and tropical blend well together with pungent floral. The nose was the only weak point, a possible factor being the 7 months since canning, but it certainly had no bearing on the flavor aspect. Huge sticky mouthful, sticky, sticky hop resins along with the 7%abv dank hoppiness alcohol makes for an outstanding drink overall. Would be an outrage to think otherwise.

4.09/5  rDev +2%
look: 4.25 | smell: 4 | taste: 4.25 | feel: 3.75 | overall: 4
Happy Hoppy New Easter April Beer Fools' Sunday (Week 684)! Between hops & wanting to make a fool out of myself, this seems like the perfect way to spend the day. I am off tomorrow as part of an amended Spring Break (Good Friday & tomorrow, but not Maundy Thursday), so I feel like I have been given an imbiber's green light. Even better is the opportunity to further The CANQuest (tm), which has now become an impossibility - new & limited-release CANs hit the market EVERY day (or so it seems). I am not giving up, but CANversely, I know that I am missing out. C'est la guerre & I do not suffer from FOMO, mofos, since I have more than enough to keep me satiated for a LONG time. Onward!

From the CAN: "outrage: /'out, raj/verb"; "An act that violates accepted standards of behavior & taste."; "This mettlesome American IPA boasts an aggressive 5 hop blend complimented by the finest British malts."

I am an outrage, so this should be right up my alley. The tab actually fought me on the Crack! as I opened the vent! I braced for a gusher as it is usually overcarbonation that causes this, but I was pleasantly surprised when nothing untoward occurred. A gentle Glug was in order as a celebration, followed by an in-glass swirl that raised just over two fingers of dense, foamy, rocky, tawny head with good retention, leaving nice lacing in its wake. Color was a pretty Golden-Amber (SRM = > 5, < 7) with NE-quality clarity, prompting a visit from The Gelt Gang of Mammon, Midas & Croesus, all desirous of a taste. Nose was dank & resinous & it was making my hophead self VERY happy. Mmm. Mouthfeel was medium, about standard. The taste was biting and bitter, but not so intense as to be gasping. The British malts gave it an earthiness that worked well with the prevalent evergreen/wintergreen/pine tar taste from the hops. Finish was cool, dry & refreshing. This could be a dangerous quaff at 7%, but it was the tastiest of the day.

Reviewed by NastyNorseman from New York