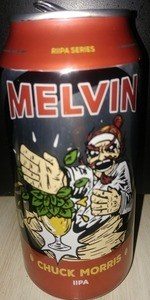 Notes: Chuck Morris is a Double IPA that will roundhouse kick, karate chop and machine gun its way to your heart. Dry hopped to perfection, power-packed like its namesake, but as balanced as a fighter doing the splits. Make sure to stretch first!
View: Beers | Place Reviews
Reviews: 38 | Ratings: 108 | Log in to view all ratings and sort
Reviews by DenverHopHead:

Poured from a 12oz can with a canned on date of 7/30/18; into a tulip.
Appearance- an oily gold with lots of small granules of sediment and very little carbonation; head is medium thick, soapy white head that leaves thick, sticky lattice work lacing!
Smell- oily hop resin and tropical fruit.
Taste - dank hop oil and pineapple, with just a touch of booze!
Feel - medium oily body with slight booze and tangy hop bitterness on the finish!
Overall- terrific DIPA that doesn’t do anything out of the ordinary and plays it safe!

[IMG] Poured into a 13 oz Weyerbacher tulip glass canned on 3/15/18. Pours a very attractive slightly cloudy yellow orange with a finger plus sticky white head that leaves loads of thin lace all over the place. 4.25

Taste follows this is very nice, mellon, tangerine, pineapple, pine, and moderate grapefruit and maybe a hint of onion/garlic but crazy balance. 4.25

Mouthfeel is bigger than average, plenty of life, maybe a tad sticky or dry, and goes down so easy at 8% ABV. 4.5

Overall this is another great DIPA sent from @jzeilinger . Old schoolish DIPA, with a east coast flare. Excellent brew, if I had access I would crush this stuff often! 4.25

Melvin Heads based in Thailand argue the excellence of Chuck Morris vs 2x4 versus Citradamus.

Bottom line, ALL GREAT and worth the price of a one-way ticket to the brewery in Wyoming. Be there. Yeah.

Nice chill haze and hop floaties and unfiltered appearance. Very nice. 1 finger head a little Rocky. Impressive. Slight tropical vibe yet still west coast bite. Extremely drinkable for the abv. Gets better after one and as it warms. Very well crafted. Better than I expected. Dry on the finish, fruity, mild bitterness, slightly chewy and smooth. It definitely isn’t mild on hops rather, it hides the abv with the malt bill and overall sweetness to even things out. Quality! And I didn’t expect it with this one. Superb

Pouring from a 12 oz. can into a snulip glass, this beer pours out a clear, golden color; like apple juice. But it does have very small sediment floating throughout. It forms a finger worth of tightly packed, well held, white colored crown.

The nose brings a dankness that I like as soon as the can cracked. A weed like dankness mixing with some pine on the back.

The taste comes in revisiting that dank presence, but in a way that’s cleaner. A very slight evidence of crystal malt is in there along with the slightly piney and resinous background. The resin is clean; not burnt. Caramel malt, oranges, slight pineapple.

The mouthfeel is the perfect mix of not being too dry or syrupy. It meets up right in the middle to create an easy drinking 8%.

Overall, I love the dankness in this and love Melvin’s approach to their IPAs, even though the hype has changed, they’re sticking to their guns and doing it well.

Draft at Thai Me Up. Pretty mellow for a DIPA. Light haze, small ring of head. Hoppy aroma, gets more pungent in taste. Light funk, grass, meadow. Sure went down easy.

I like Melvin because they tell you all about the brew, in an entertaining fashion, before you even open the can. Let's take this one step at the time to get the most out of the review process.

L: Pours apricot orange. Good and foamy. It's obviously a malty brew, being an imperial (the most alcoholic kind). The hazy appearance coloration matches the malt content. High malt means high carbonation, which is an excellent tool to bring out the bouquet of hops contained within...

S: Lively, vibrant, attentive, subtle in the background. Dank citrus notes, a touch of pine, and a good malty base. When brewers call their beer 'Imperial' they mean they use x2-x3 the amount of hops + malt. (The origin being 19th century English beers shipped internationally.) They're built to last x2-x3 as long as a Miller Lite, take your time with it.

T: It's got a kick to it. (A roundhouse kick if you will) There's a lot going on here. First, the mouthfeel is on point. Second, the ABV and flavor profile is balanced by the weight. Third, I'd estimate this to be roughly 100 IBUs. Fourth, hops are delicious. Fifth, it's dry-hopped so you get extra punch without extra bitter. (But it is still bitter, and delicious) Tastes how it smells, Citrusy, piney, malty, and a bit dank.

The primary taste is hops. The brew was designed from the bottom up to the top to be a hop blend. The malt+yeast exchange is wholesome and bubbly, and the hops just melt in your mouth. That said, when you're dealing with many hop varieties, it's complex, delicately balanced and deliberate. It tastes excellent, and is food for contemplation.

F: Good to great. Residue on the palate, which for an imperial is welcome, it leaves an aromatic finish. I'm going to have to compare the feel against Cloud Racer 5000 and Drunken Master later in the season.

O: Chuck Morris kicks it up a notch. Take a minute to read the reviews below, they are hilarious and informative.

A: Cloudy gold with rich white foamy head and very thick lacing.
N: Tropical notes, citrus, pine, and some malt.
T: Follows the nose, really nice tropical flavors with some citrus mixed in and some sweet malt. A mild bite on this one.
M: Medium but very easy to drink.
O: I liked it, nice fresh flavors and smooth, low bitterness made it easy to sip.

Picked up a single from the Craft Beer Hop Stop 6.7.19 for $3.49. Canned on 4.9.19, consumed on 8.13.19.
Beer poured golden orange with a beautiful white head.
Nose is a nice dose of citrus and tropical fruit.
Taste is really well balanced between the orange, grapefruit, and mango which is melded nicely with a large but light malt base finishing with a moderate rind bitterness, 6/10 on my scale. Mouthfeel is delightfully light and refreshing.
Overall a really nice beer that I beer that I would pursue again!

On draught at Frontier Brewing.

Pours a pale straw gold, clear, with an inch of foam.

Smells of grapefruit, some pine, hint of tropical fruit.

12 oz can picked up at the source a few weeks ago.

Pours hazy gold with a moderate head and retention. Earthy pine in the nose. Medium bodied with a chewy, resinous mouthfeel. Piney hops on the palate with a balancing bitterness and faint malt. Finishes with Honey-drizzled pine.

Pretty tasty but pretty much any west coast IPA in Cali.

12 oz can. Pours slightly hazy orange gold with a medium creamy white head that goes to a thin film that laces the glass.

The aroma is some sweet perfumey malt with lots of dank resiny and slightly catty hops.

The flavor is sweet bready malts with ripe fruit and lot of dank and resiny hops. The mouthfeel is medium to full bodied with smooth carbonation.

Overall, another solid DIPA from Melvin. A bit too dank and resiny for me.

It is so great to have some time to noodle around with The CANQuest (tm)! I am starting to see movement in the backlog & I am having a good time while doing it.

From the CAN: "RIIPA Series"; "Chuck Morris is a Double IPA that will roundhouse kick, karate chop and machine gun its way to your heart. Dry hopped to perfection, power-packed like its namesake, but as balanced as a fighter doing the splits. Make sure to stretch first!"; "Rotational Imperial India Pale Ale Series"; "Fear the Mullet!"; "Recycle!"

Man, I came at this CAN like I was running wild inna streets! It took a jackhammer to Crack! the vent, but I'm more powerful than any CAN could ever hope to be. I backhanded the mutha to set it up for an inverted Glug to remind it who's boss-man in these parts. It decided to rush up at me, forming two-plus fingers of dense, foamy, rocky, bone-white head with decent retention, but in the end, it just left some lacing in its wake for me to remember it by. Bye bye! Color was a gorgeous Golden-Amber (SRM = > 5, < 7) with NE-quality clarity & as though things weren't hectic enough, here came The Gelt Gang of Mammon, Midas & Croesus, causing their own brand of romper room ruckus as they vied for a taste. Nose smelled like somebody just cut down that pine tree across the way. 8=O Man, if this was a bag o' dank, no wonder they were fighting me so hard! Mouthfeel was big, thick & heavy, like a punch to my already bruised & battered tongue. F'n' Gelt Gang thought that it was pretty funny until I snatched averything away from them to hoard it for myself. Ha ha! The taste, interestingly, was NOT full-on pine, but instead, it was cut with honeydew & CANtaloupe. Mmm. I was not expecting this pleasant surprise & the pleasure musta registered on my mug since things began to settle down right quick. Finish was dry & left NO doubt that this was a big, boozy, bruising brawler of a beer, but it CAN be tamed. I now gonna go lay down …

T - Zesty and spicy citrus rind, some orange citrus zing, peppery citrus rind, nice onion and garlic character that reminds me of the old Oskar Blues Gubna (when it was good).

O - Absolutely love this beer. Melvin scores big with one. (!!!)

Tap at Melvin/Thai Me Up. Poured a slightly hazy, orange color with a white head of foam. It smelled of citrus and pine. Nice piney bitterness with orange tanginess. Sweet caramel backbone.

A: The beer is very hazy yellow in color—too hazy to see if there is any visible carbonation. It poured with a quarter finger high frothy white head that left lots of lacing on the surface and a narrow collar around the edge of the glass.
S: Light to moderate aromas of grapefruit and orange citrus are present in the nose along with hints of caramel malts.
T: The taste follows the smell and has flavors of grapefruit along with hints to notes of caramel malts. There is a light amount of bitterness.
M: It feels medium-bodied and a little crisp on the palate with a moderate amount of carbonation.
O: This Imperial IPA isn't nearly as alcoholic, bitter, or crisp compared to other beers in the style. It is very easy to drink.