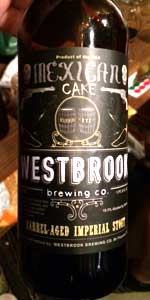 Best BA Cake variant ever made.

Pours black with a creamy mocha head. The nose on this beer really blew me away, lots of bourbon, vanilla, roasted grain, coconut. The taste was very similar roasted grain, vanilla, cinnamon, bourbon, big sweet coconut (think macaroons) with that nice chili warmth on the finish. Big body with good carbonation for a rich, smooth mouthfeel and the alcohol was well hidden. Really fantstic!

Insane nose, awesome barrel notes and complexity. get great cinnamon/churro aromas and taste. Could sip on this beast all day. dry finish and peppers galore. Only knock is the dry-heat filled finish but this is one to enjoy and let warm up. Flavor is on point - one that could be analyzed for a long while, not a plain stout by any means.

Black with a frothy tan head. Good retention for a high abv stout.

It was bottled in August of 2014 but stored well at cellar temps. The barrel components seem to have dialed down a little. Woody and vanilla, but not boozy. Lots of fudge and coffee. Mild heat from the peppers in the back end, but I was expecting more. Cinnamon spice as well.

Great beer, but I was hoping for more flavor and heat from the habs.

Of all the stouts in the lineup, this had the most inviting aroma. Due to the rich and pronounced vanilla, coconut, oakiness it was very clear it came from american whiskey barrels. The base stout is not overly impressive to me, but the best aspects of it came through in this barrel treatment: dark chocolate, cinnamon, espresso. Medium-full on the palate, incredibly smooth and well rounded with an appropriately long finish.

Pour is jet black with a dark caramel colored head. Nose is light malt dark fruit up front, some chocolate cake malt, faint wood and pepper. Flavor is brighter and has more malt to it. Bourbon makes a strong presence, the cakey malt is stronger, some heat through the finish, slightly messy in back, moderate carb, full bodied, much drier than db hunah but not as dry as the tequila cake, pepper heat through the back end and lingers.

Favorite Mexican Cake variant to date. The bourbon and rye barrels add so much to an already amazing base beer. This was a white whale for me last year. I obtained 2 and drinking this again, it is aging very nicely.

First review in over a year! This one is special so I feel I need to put a few words down. This is also the first serious brew that I have opened since I have been in the new house.

This beer pours jet black with a tan head that quickly recedes to a light ring of bubbles. This one looks nice and thick!

Taste is out of this world! So much going on. The bourbon barrel is upfront, chocolate and cocoa is big, the vanilla is strong, next the cinnamon comes in and the chillies finish off. No fusel alcohol or anything harsh in the taste. Nothing overpowers in the taste, everything blends together to create a melange of awesomeness!

Nice thick mouthfeel with a medium carbonation. Just what I expect from a barrel aged stout that is not too high in alcohol.

Overall this is a real treat. I really enjoy this style of spiced Imperial stout where vanilla chillies and cocoa nibs are used and sometimes coffee. For me it's hard to say which is better, Hunaphu's, Prairie Bomb! or this. This is a must have!

Had this at a share on 8/29. Right away, the MC smell hits you. Cinnamon and vanilla. The barrel treatment serves to smooth out the pepper burn that regular MC has. Was not boozy at all. I could drink this easier than a regular MC.