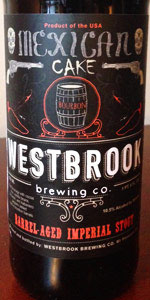 Six years later, you can definitely tell the glory days for this beer are long gone. It's still holding up much better than I would've though, though. There's a good bit of pleasant spicy pepper heat on this one. The cinnamon and vanilla are definitely gone though. I don't get the soy sauce on the taste, luckily. It's also still quite nicely chocolatey, with a hint of bourbon heat. There's some nice earthy roasted malt, too.

This is medium bodied, and has thinned out a bit over the years. There's not much booziness at all.

This was a risky experiment that somewhat worked out. I imagine this was way better in 2016, but I still found some enjoyment in it, anyway.

Rated by Grackos from Florida

S- huge coconut note on the nose up front, along with a fresh spearmint note. Undertones of earthy coffee, green pepper, cinnamon, vanilla and pepper, oaky bourbon closes it out

T- everything seems to have meshed and mellowed out. Opens with subtle oaky bourbon notes that lends some caramel and vanilla notes. Mid-palate gives earthy coffee and chocolate, as well as some vanilla notes. The finish gives some pepper heat, but not as much as typically found in Cake. Lingers of bourbon and a hint of coconut

O- everything has mellowed and meshes very well

Mar 31, 2018
Rated: 4 by DoubleDaisyCutter from District of Columbia

Rated by grover37 from District of Columbia

Reviewed by Nicolaiw from Denmark

Pours black as night, with a low, dense foam.

The smell is so layered and complex, hitting a lot of different notes. Primarily chocolate, coffee and caramel, with a nutty hint. Superb!

The taste is massive, with creamy chocolate and coffee at the forefront. A little bit of tar comes after that, before the chilis make their presence felt. I usually don't like chilis in beer, but they are so well integrated here, never eclipsing the other flavors, but addig to them.

Mouthfeel is rich and velvety, with perfect texture and thickness.

By far the best beer with chilis I've had. Not a beer I could get through a whole bomber of by myself, but the 150 ml pour was perfect!

Reviewed by bgold86 from New York