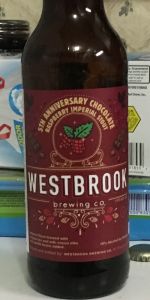 Raspberry in the nose and flavor big time. Roasted malt, cocoa, chocolate, a little coffee. Vanilla as it warms almost tastes like it's been in a barrel. Really nicely done on the semi-sweetness of it all.

This one pours a fairly dark black, with a small brown head, and not much lacing.

I'm not sure this aged well, as I get both soy sauce and a strange olive flavor. It's stronger in the aroma, luckily. The raspberry flavor is kinda funky, and a little bit sweet. The chocolate heavy base is nice, but I wish there a bit more vanilla.

This is medium bodied, fairly creamy, with a lower level of carbonation.

This is about two years old at this point, and I'm sure it was better fresh.

A bomber dated 1/5/16 that's been languishing in the fridge for too long. I don't make a habit of reviewing old beer, but I felt this held up remarkably well. Poured in a 14oz. stout glass for the review.

Look- Pours a medium thick and oily dark black with a slight ruby tint. A generous finger of creamy mocha colored foam is left. It settles rather quickly to form a thin ring with no lacing in it's wake.

Smell- Raspberries galore along with some bakers chocolate and a slight hint of vanilla.

Taste- Raspberry forward followed by dark chocolate, tobacco and a minuscule amount of vanilla in the finish.

Feel- Medium thick and oily with a milk stout creaminess. Very smooth on the palate!

Overall- It's a very amazing raspberry-chocolate dessert after a year and a half. The vanilla may have faded, but everything else is there. I'd love to try a barrel aged version of this!

Received as an extra in a trade.

A - Poured into my Duvel tulip a nice dark brown almost black with a one finger mocha head that faded slowly to leave light lacing and a thin blanket.

T - Taste has more of those nice dark, roasty malts. The first sip brings loads of jammy raspberry followed by fresh seedy berry. It's there only for an instance before the dark malts, roast, and dark chocolate and cocoa knocks it all down. It's like drinking a dark chocolate raspberry truffle.

O - Overall this was a really, really good imperial stout. The raspberries really popped on the taste . Only knock would be the lack of berries on the nose and overall lack of vanilla. Other than that, this drinks like liquid raspberry truffle.

Decent beer, but not overly impressed.

Thanks to alefish for this 22 oz. bottle dated 1/14/16, just past its half birthday, & celebrating the trade of Ricky “Horseshit” Nolasco. Split with my wife.

Pour is black - no raspberries floating in the murk. Smells like a wild raspberry patch, full stop. Nothing beer-like about it. But hey, I like raspberries. I’d like to put a few plants out near my strawberries.

Westbrook’s 5th Anniversary Imperial Stout gives off the flavor of hand-made ice cream. The raspberries & chocolate come on like gelato in Volterra. Subtext is articles of alcohol, malt planking, light roast & bitterness. The mouthfeel is a riotous victory, serious ice cream, which makes it no chore to down.

I will confess I wasn’t looking forward to this. I mean, brewers, why you waste good fruit in good stout? Me no understand. This, however, is the rare fruited stout that works. Very good beer.

Was expecting much more from this one, very thin and I didn't feel the raspberry added very much, kind of a bad taste actually. I like fruited stouts, there are much better fruited stouts out there