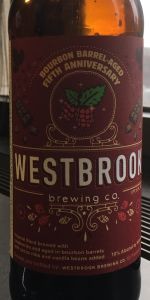 L - These stouts that WB pumps out are dialed in on how they looked. Typical motor oil pour, black as night with a half finger khaki head. Nice oily sheen on the glass.

S - The bourbon barrels are taking a seat to the raspberries here! Juicy raspberries front and center. Bourbon, oak and vanilla follow. Roasted malts bring up the rear.

T - Tart raspberries, chocolate fudge, bourbon, oak and vanilla all wrapped up together with a bow. So much depth here once the raspberries die down.

O - I know people either love or hate the 5th Anni. But, if you love it, then the bourbon barrel aged is right up your alley.

I wanted to like the cab barrel version better because it was a bit more unique, but honestly this is easily the better of the two. The adjuncts lend themselves perfectly to the oak and vanilla character of the bourbon barrel and the base beer is properly sweet and heavy to support the over the top pastry qualities of the whole experience. Westbrook's melted ice cream flavored adjunct stout craziness at its best!


A: Pour is opaque jet black, 1 fingers width of very dark mocha colored head builds and then dissipates down at a moderate rate. A few small patches of lacing are left on the side of the class. 4.5

T: Taste is very good, but doesn’t live up to the aroma. Its less rich and less sweet than the aroma implied. Very roasty, lots of roasted malt, coffee, and bitter dark cocoa. Raspberry is certainly prominent, in a partially sweet and a partially tart way. Barrel notes are present, mostly with charred oak, and some whiskey booze notes. 4.25

O: Overall, this is an great beer. Now granted, I was in the camp that really enjoyed the base beer (seemed to be a pretty big dichotomous split amongst people with the regular 5th), but I do think this variant is quite good. I almost feel like hating on fruited stouts is the new “cool thing” to do amongst the trendy BA crowd and thus even very well done ones are shit on by some people. Regardless, to each their own, but IMO its definitely a beer I would recommend trying. 4.25

Sample at Mikkeller Beer Celebration Copenhagen 2017, yellow session. Aroma has berries, smoked plums, quite fruity but also roasty. Taste is fruity with a nice sweet/tart combination, quite balanced overall with a bit of roasty bitterness on the finish.

Really solid BBA stout with plenty of flavor. Pick up the raspberry on the nose and on the very front end of the flavor. Light bodied and lacking a dark roast bitterness. Bourbon blends well with the flavors and adds a hint of dryness. Get some sweetness from the other backing flavors.

Loved it!!! Takes the reg 5th to the next level. Only critique would be it's a little hot. Should do great with a little age

This beer was absolutely phenomenal. Appearance is nice for a stout, especially a barrel aged one. Nice head retention, thick black color. Smell was very dry, like smelling cocoa. Taste was like a red wine soaked fudge brownie with a tart raspberry presence. Really worked well. The raspberry was sweet like a raspberry jam, but did not taste artificial. Feel was not to thick, but carried its own. Overall a lovely beer that I am glad to have had the opportunity to try.