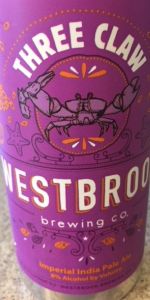 4.02/5  rDev -2.9%
look: 4.25 | smell: 4 | taste: 4 | feel: 4 | overall: 4
A: The beer is very hazy dark yellow in color. It poured with a quarter finger high dense white head that died down a bit but consistently left a short head covering the surface and lots of lacing down the sides of the glass.
S: Light to moderate aromas of mango, orange and papaya are present in the nose.
T: The taste follows the smell and has additional flavors of candy along with hints of pine in the finish.
M: It feels a bit more than medium-bodied and juicy on the palate with a moderate amount of carbonation.
O: This beer is heavier in body and less juicy compared to other beers in the style but these characteristics are expected given its strength.

Notes via stream of consciousness: So what makes this "Three Claw"? Ahh, I see, it's an Imperial IPA at 8% - "The biggest and juiciest of them all." It's poured a murky golden-orange colored body beneath a full head of white foam that seems to be holding up quite well. In the nose it's spicy, and fruity with notes of grapefruit, mango, papaya, lemon and pineapple. There's some soft pine in there as well. That's a pretty full shopping cart right there! On to the taste, and I hope it lives up to the aroma... it does indeed! It's quite different though, which I love. I'm getting a lot of apricot and peach that I didn't find in the nose at all. The spiciness remains and I assume that's coming from the rye although hops can lend a similar spiciness so it could be from a combination. I don't normally like rye in a beer like this but in this case it absolutely works, and that also helps it stand out from the crowd. Some other flavor notes I'm finding are tangerine, pear, melon, passionfruit, gooseberry, and lychee. Wow, that's even more complex than the aroma! It's very nicely balanced with some sweetness from the malt upfront that then enhances the fruitiness across the middle as the bitterness rises, and finally a mostly dry finish with bitterness, alcohol, and spiciness lingering as the malt and fruit fades. That's what I'm looking for in a beer, balance and roundness, and by roundness I mean a variation of flavor notes as opposed to a more straightforward 'this & that' kind of deal. I've even had beers that have had basically one note straight through. Additionally, when I'm considering 'roundness' I'm looking for a balance between the notes; nothing should be more apparent than everything else unless there are other notes of similar intensity which balance it. An example might be a beer that has strong pine, and strong citrus, but also a wide side of soft golden caramel that keeps everything in check and ties it all together. Three Claw is just the opposite as everything is at the same level and perfectly in tune. Moving forward, it's smooth and silky in the mouth following an initial bristle of carbonation. That's the extra protein from the wheat and oats in action, and now that I've mentioned that, once it warms a bit you can taste them both so it's actually really well rounded just within the maltiness as well. I'm about two-thirds of the way through it at this point and I've still got an almost complete surface covering of foam, and it's actually got some fluffiness to it. There's also a decent amount of lacing about the glass so it scores very well there. I didn't think this was going to be as good as it is given that it's up against actual NEIPAs from New England but damn, it slams!
Review #7,865

Beer poured a hazy orange with a pretty good head that dissipated quickly.

Nose is very nice, full of pineapple, mango, and oranges.

Taste is a nice blend of pineapple, papaya, mango over a large malt base. Finishes a tad sweet; 4/10 on my bitterness scale.

Overall a nice aromic beer that has some good flavors but lacks a little crispness. Not bad but would not do again.

Aroma is sweet tropical fruits, pineapple, mango, passion fruits, and tangy tangerine along with some floral and spicy notes to round it out.

Taste is like the nose nice tropical fruits tangy tangerine. Finish is where it is different , not sure how much rye they are using but the spicy notes really come out in the finish along with some lingering grapefruit.

Mouthfeel is solid medium pretty solid must be the oats. Carbonation leaning more to the mellow side of medium.

Overall not bad I like the rye addition it make this interesting. Otherwise it would be a 3.5 NE style hazing IPA.

4.3/5  rDev +3.9%
look: 4 | smell: 4.5 | taste: 4.25 | feel: 4.25 | overall: 4.25
Pours into an imperial nonic a hazy citrus punch looking color with a half finger white head that is gone pretty quickly.Straight citrus juice in the nose,somewhat sweet and just juicy as all get out.Really like the mellow feel in the mouth,on the fuller side for the style.Nice complexity on the palate not overly 'juicy',tangerine and orange followed by a bit of resin and earth to dry things out a tinge.I have gotten a little sick of the style but ones like this I'll go back to,not overly sugary sweet and fruity,nice complexities.
May 01, 2020

Spicy and dank but smooth and citrusy with a vanilla orange character nearing Orange Julius.

Reviewed by Jimmy_Kneecaps from Tennessee

4.39/5  rDev +6%
look: 5 | smell: 4 | taste: 4.5 | feel: 4.25 | overall: 4.5
The appearance is typical for an NEIPA with two and a half fingers of stark white head resting on top. Aroma is tropical fruits; mango, pineapple, orange, and maybe a little bit of weed. Taste follows the nose with low bitterness but a noticeable hop bite at the finish. Mouthfeel is on the thin side of medium and soft, kind of bubbly carbonation. Overall this is fantastic. I love the way it starts sweet and finishes with that hop bite.
Jul 28, 2019
Rated: 4 by Pearlstreetbrewingco from Florida

It pours a hazy orange yellow with an impressive and long lasting head of foam. Lacing is equally as impressive.

Fruity, tropical, grapefruit, dank, hint of onion or maybe not. Sweet notes that are usually associated with a DIPA, some alcohol burn during the swallow.

Close to full bodied for the style, carbonation is just right.

It's very good. That I cannot deny. TY Nick!