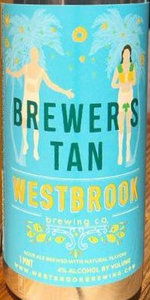 Back during Charleston Beer Week, the guys from LIC Beer Project stopped by to help brew a tropical creme pie inspired gose that we're calling Brewer's Tan. Pineapple puree, toasted coconut, pistachios, vanilla, cinnamon, and milk sugar make this a perfect beverage for all your tropical and tiki-themed relaxation activities.

16oz. can into Night Shift stemware. Shared by schen9303.

Nose is pina colada. Heavy on the pineapple with a creamy coconut and cane sugar note. Simple but really delicious. Beer opens pineapple and vanilla. Very creamy. A touch of coconut in the middle with some notes of phlegm, citrus and more pineapple at the finish. The correct flavors are there, the vanilla and lactose ruin it. Body is light with ample carbonation. Prickly and lively on the palate and goes down foamy and refreshing. Really drinkable.

All I need is pineapple and coconut. Sometimes more is not better, and in the case of this beer, the addition of more and more ingredients beyond the obviously complementary ones do not make this better.

Pours a hazy yellow with a finger of white. Fades very quickly.

Nose is coconut, and pineapple sourness. Reminiscent of yogurt. Quite pleasant.

Taste is a huge burst of coconut and pineapple. Perfect combination. Tangy pineapple and smooth coconut mix beautifully together. Tart and sweet. Cinnamon comes in very mildly afterward. Pistachio provides a mild nuttiness that comes through with the malt finish. A complex brew with multiple facets.

Mouthfeel is medium bodied and smooth with mild carbonation.

Overall a delicious brew. Light in alcohol and very drinkable. This would be great for summer.

L: Had this beer on-tap at Westbrook's tasting room, poured into a cylinder glass. Had a bright, golden yellow color and a cloudy consistency. There was a half inch of creamy, fairly long-lasting head. Excellent lacing.

T: Tasted of a good amount of coconut (quite sweet), lots of citrus fruit (lemon and lime, in particular), some tropical fruit (pineapple, especially), a little cinnamon, a tinge of vanilla, a slight nuttiness. This is a light, sweet, well-rounded flavor. It's fruity and a tiny bit sour, but easy to drink.

F: A well-carbonated beer with a lively finish. Light-bodied.

O: A well done beer that would be good for summer. Drinkable.

On tap at Colter Bay in Buffalo, NY.

This one pours a fairly hazy golden yellow color, with a small head and lots of lacing.

There’s a lot in here, and most of it comes through on the nose. It’s mostly pineapple and coconut, with macadamia and a touch of spice coming through.

Despite the ingredients list, this is nowhere near as heavy handed as it could have been. The pistachio adds a great creamy and nutty sweetness to the pineapple and sour citrus flavors. There’s some spiced coconut cream too, and a nice creamy vanilla finish.

This is light bodied, clean and creamy, with an awesome drinkability. It’s so light, but vibrantly juicy and flavorful.

Received in a trade. Had planned on sharing this with JLindros but I'm already swinging by tomorrow with a dozen beers so something had to give. Now it's a game of 'which one of these do I drink myself'. As I crack this I can hear him going "this isn't a beer!"

A - Poured into my Duvel tulip a nice hazy very pale golden hue with a thin half finger white head that faded to leave a thin halo and light wisps.

S - Big aromas of sweet over ripe pineapple. Tons and tons of pineapple, both fresh and canned, the coconut is a bit on the heavy toast. Decent vanilla on the aroma, not much in the way for cinnamon, good lactose, flashes of creamy wheat. Not getting much pistachio either. If this was billed as simply a 'pineapple coconut vanilla gose' then it would be aces, however, all the other added bits don't quite translate on the nose.

T - Taste is nice gose acidity, sour lactic notes, pie crust flavours that are stereotypical of a Westbrook gose. Big creamy wheat followed by sweeter pineapple. The pineapple is nice, not overly there bit bringing the sweet fruit. The coconut oddly enough is much more subdued than it was on the nose. The coconut that is there is almost aggressively toasty. Faint, faint vanilla and just a little bit of cinnamon. I'm not sure if I get pistachio either. As it warms the pineapple pops even more.

M - Mouthfeel is lightly carbonated, decent body, not as flemmy as the style can be.

O - Overall this was a solid beer, however, some components next quite popped namely the cinnamon and pistachio and the coconut stayed as an overly toasted background element. The pineapple here was absolutely splendid, reminding me very much of a pineapple cider in the level of fruitiness. For that element I would drink this again but on the whole I'd say this was one of Westbrook's weaker Gose entries.


Brewer's Tan from Westbrook Brewing Co.
Beer rating: 4.08 out of 5 with 8 ratings