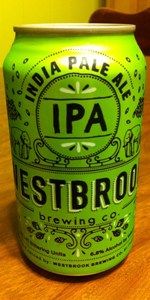 Notes: A base of pale, Munich, and Carapils malts is just enough to contain the massive hop flavor and aroma packed into this highly drinkable IPA. A blend of four American hop varieties is added four times in the kettle and twice in the fermentor for a complex and layered hop experience. Best served at 45-50˚F in a tulip or English style pint glass.

Pour beer on a Spiegelau IPA Beer Glass. Very nice cloudy haze yellowish/orange color. Could see some some goodness on the cloudy haze. Nice hop smell and a white head foam about 2 inches high buy slowly went away to a white ring around the top of the glass. Take a sip and nice likely bitterness taste and wow goodness very good IPA beer. I have many good to wow IPA beers and I personally rate this beer an 8 out of 10. Definitely a good IPA to pair with red meats.

L: Pours gold with a light haze under a 3” lacy light cream colored foam cap that takes 2 minutes to recede to ¼ its normal size.

this is absolutely fantastic east coast style ipa, if you told me this was made in vermont, i would believe you. everyday is christmas when drlovemd87 is your pal, lucky me, he is one hell of a beer advocate! this pours very pale blonde in color, washed out a little, yeasty and resinous, light malt color, robust splashy soft white head with expert retention. it smells like something ive had from lawsons, really, the hops are that bright, mixed between tangerine zest and new spruce tree spring growth. its beautiful in the nose, but the taste is even better. just caramelized pilsener malt is a very worthy base for this, which otherwise would probably not have the fortitude to support such a resonant hopping. the label gives very little information in the hops, to my dismay, but i am sure of one thing, this is refined and calculated and dialed in a professional way that is unrivaled. its only as bitter as it needs to be, and the hop cone itself just dances on the tongue from first sniff to long after the swallow. its majestic in that way. maybe i am bored with colorado ipa, i hate to even propose such a thing, but this took me to a hoppy (happy) place i havent been in some time. medium bodied, i could drink ten of these, and would love to do that someday. everything about this refreshes me, both palate wise and spiritually. ipa is medicine, and this is the shamans share!

Appearance: Pours a clear amber color with a massive head that leaves a lots of lace sticking to the pint glass

Smell: Are we in a pineapple plantation or what?

Taste: Pineapple and other typical fruit, including grapefruit, mango and lemon; the malt acts as a platform upon which these tropical flavors can strutt their stuff

Overall: This has to be one of the top everyday IPAs on the market today; just mashes all the buttons on my book

Flavor reveals big grassy notes throughout. The malt backbone is toasted and fairly sweet, providing contrast to the moderately bitter finish. Fruit character is more muted, and earthy and herbal hops seem to be more of the focus. The finish is a touch more bitter than I prefer, and I wish the fruity hop character were more pronounced.

Pours a light and clear shade of ghostpenny. I just made that up; see, the beer is colored like a penny would be if a penny were cartoonishly, preternaturally light and translucent. Not much head here: less than a finger of grey-white foam that dissipates as fast as it takes to turn the lights on in your room when you hear a scary noi...ok, I'll stop.

My first impression of the aroma is that it seems quite balanced. Not in a "nothing is sticking out" way or a "the nice way of saying that the hops are unassertive" way, but in an intriguing way that connects the hops and malts. Most IPAs don't have a coherent linkage between their malt bills and their hop bills other than "throw some crystal malts in there to tame the bitterness." This beer? It smells like a deciduous forest on a Summer's day. The nutty malt works with some legit red apple flavor (not a green apple off-flavor, but red apple cider/juice). Connecting those further are the spicy, pine notes (I know: pine trees are coniferous, not deciduous. Work with me, here). There's some light orange and grapefruit pith aromas too. It would be an average IPA aroma if not for how well-connected everything is. The hop bill was thought through, that's for sure.

That balance is less successful on the palate, simply because it allows the malts to shine too much. A nice malt bill that's dryer than one would expect from a malt-forward IPA; almost like they used Caramunich malts in here as part of the beer's caramel/crystal malt dynamic. The hops are straightforward: spicy, lightly citrusy. They're also earthy in a way that works well with the malt flavors. As it warms, I pick up on some passionfruit(!), which is welcome. This is solid, well-conceived stuff.

The mouthfeel is on the lighter side of medium-bodied. I wish there were a touch more carbonation, but it's pretty solid just the same.

Overall, this is a nice session IPA. It makes more sense to drink during the Fall than the Summer, given it's earthy flavors and malt notes. I'll give it another go when football season starts.

A really good IPA on draft in Greenville.

big thick head that held up strong even after a few sips.

would not seek this out over some others for my normal consumption, I drink Dales daily, but this is a great IPA to have anytime. I will grab a sixer next time I am at the brewery.

Honestly, this is what a bunch of those new-fangled "Vermont-style" IPAs wish they could be. I'd gladly drink the hell out of this and One Claw before killing myself trying to get the last NE juice bomb.