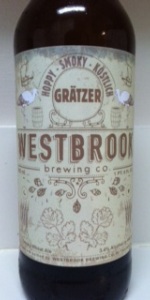 Notes: This is our interpretation of a Grätzer, which is a traditional German style smoked wheat brewed with lots of hops and 90% oak smoked wheat malt. The result is a spritzy, smokey and refreshing ale.

The brewing world has seen tremendous advancements in the past few decades: advancements in ingredient development, brewing technique, equipment and intelligence. These developments have led us to many unique and refined flavors while relegating others to extinction. The gratzer should probably be the later.

Its hazy golden pour easily leads the eye to wheat to foster expectations of fruit, spice and bread. Instead the nose is met with strong smoky phenols to overwhelm the senses. Smoldering embers link with burning plastics for an unsettles, peaten, peppery irritation of the olfactories. Once the mindshift turns to want mesquite and savory flavors, the tongue is attacked with sourness and immediate astringency.

While the smoke lifts through the middle, there's the evocation of burnt lime, burnt lemon, burnt crabapple. Strong sourness easily infiltrates the tastebuds with the intensity nearly of white wine vinegar and margarita. Light saline qualities link up with the sourness and cracker-thin malt breadiness for faint fullness and savory effects.

Though its strong effervescence ensures a crisp and light body, it also amplifies the smoke, pepper and chemical properties of the phenolic complexes and upsets the balance as much as it assists the body. However, the mind quickly goes to tonic water and soda-like sprite. Simply put, the flavors that are known to the gratzer are not compatible with each other and even the qualified brewers of Westbrook are incapable of saving the style.

Disgusting, taste like smokey bandaids aged in soda water, why do people enjoy this?!

Pours with a small white head that dissipates quickly and leaves no lace. The body is gold and very hazy. The aroma is very smoky, with notes of ash and something I hate to describe as cigarette smoke. Light, dry malt up front with a bit of honey and some smoke. Finishes with a touch of spicy hops and more ashy smoke. Medium body, moderately high carbonation, and a slightly sweet finish. Kind of odd, the oak smoke is really odd and not particularly pleasant in the aroma. That being said, it is much more drinkable than it smells with a balanced finish and relatively mild smoke character.

Thanks to dogdoc for sending this bottle! Reviewed from notes. Poured from bomber into an Upland pint glass.

A: Very hazy light gold, with a thin white head and visible carbonation average to a bit low.

S: Smoky, like old charcoal, wheat malt and a light lactic presence. The smoke isn't terribly strong, but seems to blanket over most of the rest of potential aromas.

T: Barbecue smoke, light wheat and pilsner malts, a very light lactic tartness, and a mild hoppy bitterness towards the end. The smoke flavor lingers a bit in the hang.

O: I believe this is my second Gratzer, and while smoked beers aren't my thing in general, I find these lighter smoked beers to be among the most palatable. I don't know that I'd go looking for another pour of this one, but that's personal preference. I feel like the beer was well-made. Not nearly as tart as Westbrook's take on the Gose, but still a quality beer. Would be about a 3.5 on my scale of personal preference.

Yet another gem sent my way courtesy of Cackalack Wil, thanks guy! This Gratzer is very pale, straw golden from the get go with substantial haze. Tiny little carbonation bubbles rush to the crown from what seems every surface of the glass. The head is amazingly white, creamy, and leaves behind sheet lacing. Impressive.

The nose actually smells very refreshing, mouthwatering actually, especially when taking into consideration that this is a smoked beer. Tangy wheat is first and foremost with the smoke a close second but keep in mind this beer is soft all around. Neither the wheat nor the smoke are overly done. There's an undercurrent of snappy citrus that reminds me of coriander but is probably from the "lots of hops" that Westbrook mentions using.. I like where this is headed.

There's nothing really to update from nose to flavor. The wheat remains tangy and surprisingly substantial for a beer with such low abv. The smoke is soft, muting the wheat a bit and leaving a film on the palate with hardwood embers and very mild smoked sausage lingering. Again, what reminds me of coriander pops up in the middle and adds a touch of citrus. Hops again. The finish is salty like a gose. I'm a big fan of these flavor combinations.

The mouthfeel is tough to explain. The actual weight is light but it has, from the smoked malt I assume, a palate coating ability that seems wholly appropriate. The light smoke lingers while a little slickness remains after each drink. This beer is refreshing and highly drinkable.

Westbrook nailed this beer. It's exactly what they describe on the label; "spritzy, smoky, and refreshing". The wheat and smoke are perfectly balanced. The hops add a nice citric side note. I could drink this beer often. Can this and toss it in sixers. Thanks. Cheers, Wilson!

Very excited to try this one. I'm a big fan of German beers, low alcohol beers on a wrm day, and smoked beers. This seems like a great marriage of the above.

The beer is clear and pale golden with a small white head. The aroma brings some German characteristics, bread, grain, subtle smoke. Smoke character emerges more as the beer is allowed to warm. Really light and refreshing. A lot of flavor packed into such a low abv beer, though everything is chill and understated. Smoke and kolsch linger in the finish. Nicely done. I'm glad I have another to enjoy.

22oz. Whole thing into the oversized Sam Adams glass. It was a fairly clear pour until some sediment slipped in. A dull gold with a thin white head.

Pretty light bodied, could maybe use a tad more carbonation. Drinks very well and easy. A good amount of flavor in a small brew, the biggest small beer I've had. Worth a try.

A: Poured from a growler to a pint glass. Had a pale yellow color and a cloudy consistency. There was a small amount of foamy head that quickly dissipated. Not much lacing.

S: A very smoky aroma, with hints of hops and wheat as well.

T: Tasted of smoked malt, a bit of wheat, hops (more than you might expect), and possibly a little citrus in the finish. The smokiness doesn't overpower the flavor, which is pretty solid. Reminds me of Professor Fritz Briem's Grodziskie.

M: A good amount of carbonation with a crisp, smooth finish. Light-bodied.

It was hard to drink this slow. I honestly could have chugged it without blinking an eye. Lots of flavor packed into such a low ABV with effortless balance. Refreshing just keeps coming to my mind. This is my first beer from Westbrook and I don't want it to be the last! Thanks to Hopswagger for the bottle.

Taste - Bright citrus. Wheat grain. Smokey. Bitter in the back.

Mouthfeel - Very light, but quite bitter. Smokiness detracts a bit.

Overall - Well, I guess this is what it's supposed to taste like, but I don't get it.