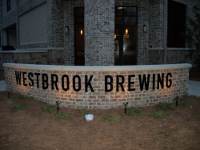 Westbrook Brewing - 12/20/2014. Got lucky on a trip to Charleston, and happened to catch them during their fourth anniversary party. The weather was pretty bad, so the turnout wasn't huge. Anyways, I love this place. The beers are absolutely fantastic, the gose, One Claw, and IPA are some of my favorites. Got lucky and got to try Mexican Cake (outstanding, coming from a Hunahpu fan) and Gozu (awesome). Had a flight of beers after the Mexican Cake and was very impressed. They contract brew Evil Twin beers, so got to try a few of those, including Barrel aged Biscotti Break, so good!

You're able to pick up to go beers in cans and bottles from the brewery for a reasonable price. 6 packs were $10, the 4th anniversary beer was $10, and their Dark Helmet and Udderly Stout were $6. Very reasonable considering some breweries charge $12-$20 for some of their limited run beers coughcigarcitycoughcough.

Service was amazing. I picked up a shirt on Saturday, and realized that night the shirt was too small (breweries need a standardized shirt maker, dammit). I emailed the address on the company website to see about a replacement, since I was leaving town before they opened again that Tuesday. I had an email Monday morning telling me to come by the brewery for an exchange. No fuss, just great customer service.

Westbrook is a must if you are in the Charleston area. Hell, even if you're in South Carolina or Georgia.

Unpretentious vibe for such a well known place. Servers were helpful without being obtrusive. The beers were top notch. I had s flight of stouts that were all phenomenal including two Mexican Cake variants. My girlfriend had IPAs. We split an immense pretzel that was very good. A large number of beers on sale including cellared stouts. The only negative for me is the limited hours that they are open. If you’re in the area it’s well worth a visit.

This has become my favorite brewery in SC!

Gorgeous facility, probably as many Evil Twin beers on tap than westbrook offerings. Bartender was working his first shift. Overall, decent. Would go back but not in a huge hurry to

Great place for an afternoon or Saturday beer. Large bar, plenty of indoor and outdoor seating. Decent parking including large overflow lot. The bartenders have always been knowledgeable and friendly. Large tap list. Flights are an option. Bottles, cans and 32oz crowlers for takeout. Vintage bottles for purchase/consumption on site. Friendly folks. I have a good time every time I visit.

Solid place! Nice selection of beer with some rare ones! Great on site cellar beer to purchase/drink! Will definitely go back when traveling through!

Nice place fairly large with an almost circular bar in the middle with a smattering of tables around the perimeter. If you sit at the bar as you walk in the door you are facing the actual brewery and can see the vats. Looks chic modern with light wood and lots of concrete. Quality is pretty good, their beers are quite good. Service was ok, bartenders were fairly knowledgeable but you got conflicted statements of things if you asked different people the same thing. Selection was ok mostly IPAs on tap and several different DDH versions of Two claw. Had an extensive list of 22 oz bottles for on site consumption with anywhere from overpriced to wildly overpriced ranging from I think the Low $20s-$350. Capitalism at its finest. I'm not sure why the on site bottles could not be purchased to take home considering the prices you were paying.

Probably the most popular spot in the up and coming Charlestown brewery scene. I got there 10 minutes before they opened and they had a line on a regular day. Famous for their wedding cake and Evil Twin collabs. The brewery is nice, and they do some quality stuff. They could push for world class in the future.

Came here with Da Boss yesterday after a rainy day at Boone Hall Plantation and a wonderful lunch at R.B's on Shem Creek.

Vibe was decent as the room was full of folks presumably there mostly for the Mexican Samoa. Very polished and clean environment.

Quality of the beers that were available was solid although i was not hugely impressed with the two beers i sampled.

Service was solid after initially getting a tab going as i was able to check out pretty quickly after ordering some Cake to go and pay for the brews and swag.

Selection was a bit disappointing as they had maybe 10 beers on tap.

Overall definitely worth a stop if you are in the greater Charleston area.

My visit did not meet my expectations. The tasting room itself was very posh, clean lines and hard surfaces which isn't usually my thing. The quality of the beer was good which I figured it would. The service was OK at best as the servers weren't rude or over friendly and got miffed if you asked too many questions or didn't understand what they were saying. I got the impression they all had high opinions of themselves. "It's my first time in this place dude, chill out". What I was most disappointed about was the lack of selection other than their readily available distributed beers. There was only one 'brewery only' beer and I was expecting more. Maybe I had too high of an expectation but either way I was disappointed.