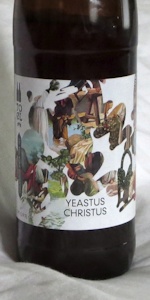 500ml bottle, with one of the better beer names that I have come across as of late. A 'farmhouse IPA'.

This beer pours a hazy, medium copper amber colour, with two fingers of puffy, loosely foamy, and fizzy dirty white head, which leaves some streaky defrosting windshield lace around the glass as it lazily sinks out of sight.

The bubbles are fairly robust in their at times mouth-filling frothiness, the body a decent middleweight, and sort of smooth, as the yeast and the bubbles kind of step all over things here. It finishes off-dry, barely, with the citrus, yeast, and green esters muscling any lingering malt right outta the way.

Overall, this was much more agreeable than I was expecting - at least the farmhouse (read: yeast) effect was applied with a judicious hand, and the underlying hoppy ale still shines through. A decent quaff, with a well-integrated, and near 15-proof booze quotient, which may or may not be part of the reason that I found this one growing on me as things progressed.

Pours amber with a fading head.
Nose shows lots of funky yeast notes with a little malt underneath. Little else. Some banana.
More funk as a flavours along with some booze. Some piny hops and an assertive bitterness.
Carbonation seems a little high.

Hazy amber, caramel color with visible bubbles. Soft, white froth. Funky, barnyard and citrus scent with caramel and straw notes. Palate of soft caramel with an overpowering, harsh Brett funk that ruins the whole thing. Dry feel. Nice bubbles. Yeast and grain texture. This may be a descent saison if the Brett funk was toned down several notches.

The pour is darkish orange with light haze and slow-moving carbonation bubbles. Voluptuous off-white head falls to a solid cap leaving bits of lace behind.

Scent is pretty hop-forward with grapefruit, pineapple and kiwi coming to mind. Earthiness and some bretty yeast come out more with warmth.

High carbonation but fitting for the style. Light tartness+funk make this one somewhat of a sipper but otherwise pretty easy-drinking.

This reminds me very much of a toned down version of Anchorage Galaxy White IPA, which is good because that beer was a little over the top for me. Good stuff, looking forward to exploring more from this brewery.

Served on tap at Mikkeller Bangkok. Listed as a saison (listed here as a Belgian IPA).
3.75/3.5/3.75/3.75/4
Almost clear but not matte-brown gold. Spicy lightly funky tart. A minerally intoxicating sort of scent. The taste is pleasant, fruity-pungent, and lightly tart. The mouthfeel is light and vaguely prickly. An enjoyable saison.

Nose is a nice funky, band-aid-y, meaty profile. Some hops, some malt, but lots of dry, spider-webby Brett. Dry, champagne-y.

Taste has hops, bit of malt but again lots of drying Brett.

With the ABV, huge Brett presence and hoppiness, this almost drinks like another Orval clone. Can't really go wrong with that profile though. Enjoyable.

A nice, boozy-edged IPA that deftly balances malt sweetness and a heavy hop bitterness. The hops and ABV make for a rather dry, phenolic-edged beer, yet it also provides some nice, malt grain sweetness to the whole picture, too. This has a kind of saison/farmhouse quality to it but definitely leans more so to a malt-forward pale ale beer. A nice change of pace from American styled IPAs.

Straight pour from a pry-off 1pt. 0.9oz/500ml bottle to a short, stubby tulip; no bottling or freshness dating visible. Not sure how fresh it might be, but it is a Brett beer so let’s see where it’s at, regardless.

Appearance (4.0): Two solid fingers of custard-colored foam rise off of the pour, capping a hazy, orange-amber colored body, dying down at a slower than average pace and leaving a thin film on the surface and a wide, lacy collar around the edge. As the beer recedes, it leaves a wide, unbroken collar on the backside of the glass, and a few scattered suds on the near side.

Smell (3.0): Moderate caramel, light toasted bread, and candied orange peel more or less make up the aroma from the start. There’s some light lemon aroma, some floral tone, hay, and a little silage hang out around the edges, but the aroma’s still dominated by mildly oxidized malt and muted hops. I like the potential and the depth here, but it’s an old-ish IPA that didn’t gain anything with age.

Taste (3.75): The aroma didn’t lie, but there’s still a lot more going on here. Lightly oxidized malt showing a bit of caramel, stale multigrain bread, light toast and some nutty toffee lay a solid base, but it’s quickly overshadowed by remnant bittering hops and some real weird, brett funk (but it’s good funk). Bitter orange zest, a bit of sharp cheese rind, a strong grassy tang, and yellow grapefruit flesh take over the flavor profile quickly, moving toward a floral dimension on the back end. The finish hangs on for a bit, and just a low level of alcohol warmth rises after the fact.

Mouthfeel (4.5): Fine carbonation ushers in a drying, moderately oily body that’s medium weight and zesty, tingling all over before washing out. The fine but assertive carbonation accentuates the dryness of the hop bitterness and brett phenols, making the flavor more dynamic.

Overall (3.75): I feel like this is a beer that’s much better fresh. It hasn’t become a bad beer by any stretch, and in fact it’s still really enjoyable, but it’s clear that what it is now just doesn’t match its potential. It strikes me as a strongly hoppy IPA brewed with a mix of sacch and brett, rather than a hoppy brett beer that’s designed to integrate the hop character and brett into one big, dynamic flavor profile. Still, it’s a good beer, and I’d love to try it fresh.