Smoke On The Porter, Fire In The Rye
To Øl 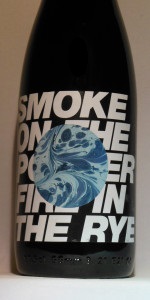 Notes: A 13,2% Imperial Porter, using Rauch Malt for a depth of smoke, a selection of Chillies for subtle smokey flavours and designed to light the fire under you, and a mix of both roasted and regular Rye Malt to spice things up further.
View: More Beers
Recent ratings and reviews. | Log in to view more ratings + sorting options.

Friday's meandering around through the Bottle (!) Backlog took a detour into The CANQuest (tm), however gloriously briefly, but today, it is back to/on the Bottlewagon. 8=( My recycler must be astounded this past month+ since I rarely fill the bin, but I have been doing so on a weekly basis since ~ 16 March. Usually, I am laser-focused on CANs & those get set aside for a ~ quarterly visit from Jeff Lebo over in York County for his massive CANlection. All is not lost, however, as most Bottles contain things that I did & still want to drink. Especially the barrel-aged beers and even more especially, the non-whiskey barrel-aged beers. They give me an opportunity to delve into my liquor cabinet where it normally remains closed with its contents merely gathering dust. Sigh. My advancing age has softened me up so that I no longer desire shots. I will merely pour a wee dram & sip on it over the course of the review for a point/counterpoint. This is one such beer.

From the Bottle: "Smoke On The Porter, Fire In The Rye Imperial Stout brewed with Chili"; "Rye and Fire? A ludicrously brewed Imperial Stout with heaps of Rye to give a sweet spicy aroma paired with the fierceness of Chipotle, Guajillo and Ancho Chiles."

I Pop!ped the cap & started a slow, gentle C-Line pour into the awaiting glass. It foamed beautifully to form two-plus fingers of foamy, soapy, rocky, deep-brown head with limited retention, thanks to the presence of the peppers. How did I know? The nose knows! Man, this smelled like somebody was dousing a charcoal B-B-Q using hot sauce! This was just on the pour! 8=O Color was Very Dark Brown to Black/Opaque (SRM = > 34, < 44) with mahogany highlights at the edges. Leaning in for a whiff, I was reminded of being given smelling salts! It began gently, shaking my nostrils awake, before suddenly erupting into my sinuses! 8=O Mouthfeel was big, thick, full & creamy, as though a dollop had been scooped into my mouth & onto my tongue. A dollop of what, though?!? No sooner was I rolling around & allowing it to warm than it spontaneously combusted! My bald pate coated over with a sheen of sweat, my eyeballs began to drip, my nose opened like a tap & my first exhalation was like that of a dragon's breath! 8=O Then, the smokiness kicked in & I thought that I was fighting a Class "A" fire! 8=O I reached for my shot glass of Rye whiskey & took a taste. 8=O What was it that David Bowie sang about putting out fires with gasoline?!? 8=O Mommy! Wahoo! Finally, as the burning began to subside, I took another sip. Now, I could appreciate the subtleties. The smoke was as it was meant to be - very evocative of Chipotle chilies. Those, I can generally handle. They have an inherent smokiness that is only enhanced by roasting. Mmm. Next, though, were the Guajillo & Ancho chilies. I am not enough of an expert to parse out the difference, like my brother & two locals, Dave & Kyle, but I know them when I taste them. This was the low, slow, subtle heat of a venomous snakebite worming its way through your central nervous system, slowly paralyzing you as your heart slows towards death before suddenly igniting, allowing you to feel every vein just before your heart explodes in an agonizing burst. 8=O Mommy! This f**ker was SO deceptive with EVERY sip! It started out so pleasantly each time & then, as soon as I had let my guard down, it erupted with a burst of heat that seared everything in sight. My L eye was spot-welded shut as a result. My tongue lolled limply out of my mouth, needing pushed back in so as not to bite it in an involuntary reaction. My wee dram of Rye was not helping, only amplifying the heat while allowing the smokiness to intensify. My nose was running like a valve had been opened.

The ABV began to take 'hold, rocking me back like a fighter's L hook (my Kryptonite) while I was already on the ropes & looking for my corner to throw in the towel. 8=(

My trainer, Rocky (no BS!) told me, on our first night together, that there would be none of that! I would fight bell-to-bell or be carried out on a KO. There would be no TKOs or Forfeits under his tutelage. I didn't realize the implications until my last fight against a Marine who I think went on to a career as the Wolverine! F**kin' guy came out with a L hook that split my R eyebrow, contacted my nose so that I though that it broke, especially given the krovvy, followed with a R uppercut that rattled my teeth & jaw & I was done! I looked over at Rocky shaking his head, tore off my gloves & walked away to a chorus of boos & jeers. I cost a lot of people a LOT of $ that night, but I was done & I wasn't looking back!

The Round Card Girl came & went & I was back on my feet. The smokiness was staring to overcome the heat & now, things were getting exciting. The chilies' heat had done their worst & now came fun time. It finished dry, as any spiced beer should be expected to do. I was left with a lingering smokiness above a pleasant heat. YMMV.

Damn, deep, dark and rich. The color is as my daughter would say, “darker than your soul.” And the head on this....perfect. My new favorite which is sad because it’s retired. Cheers!

A: Poured into a snifter to a deep black topped by a very dense two finger light tan head that retains well and fades slowly to a collar around the edge of the glass with excellent lacing
S: Smells of smoke and chocolate with some roasted malts, peppery heat and some light coffee
T: Taste is smokey and sweet up front with some nice chocolate and roasted malt notes with some nice peppery heat that starts to come in. Slight coffee and a nice hit of rye spice comes in at times as well. Swallow is light coffee, dark chocolate, more smoke and some lingering peppery heat.
M: This beer has a very smooth and slightly creamy mouthfeel that is at the upper side of medium in body. The level of carbonation is low but adequate for the style. The beer finishes on the dry side which is expected at the ABV.
O: Overall this is a really nice beer with some great flavors and complexity. I always worry about beers with chilies added since it can sometimes get a little excessive but the amount of flavor here is very nice. Worth trying if you're into this sort of beer.

Poured into a Fremont small snifter. Pours a very dark mahogany brown, appearing nearly opaque black in the glass with a nice, two finger khaki head with good retention and nice lacing. Aroma of dark toasted malt, chili pepper, green pepper (oddly), slight rye. Flavor is dark toasted malt with light char, immediate light chili burn, hint of rye tartness, cocoa. Chili fire heats up into the finish then tones down, leaving a long, lingering chocolate and light caramel finish, almost like a German chocolate cake with chilis. Medium bodied with a nice, firm creaminess. Kind of a roller coaster of flavor, at first, solid porter/stout malt then enough chili to make me think uh-oh, but it doesn't get oppressive. Then a quite pleasant chocolate cake finish (with a little Tabasco). This seems like it shouldn't work, but I really liked it. The chili is forward, but supported by robust malt. The chocolate and slight caramel flavors are very nice in the finish. Well done. No date on the bottle and this might be up to a year old, and held up well, if so. ABV covered well. To Øl often pushes the envelope and they usually pull it off, as in this case. And truly great name. Uh uh uh, uh uh uh uh.

Wow there is a lot going on with this beer it's definitely a thinking mans beer. The smoke comes out but it isn't too over powering there is some spicy charecter to the beer. The only thing I didn't really enjoy was the alcohol comes off as a little hot. But considering the abv of this beer that's pretty impressive. Dark in color with a nice body. This beer has a very rich diverse aroma.

To Ol's Smoke on the Porter, FIre in the Rye, imperial stout brewed with rye and peppers. 13.2% ABV.

S: Peppers are noticeable, front and center. I don't know my peppers, but the dominant aroma seems more vegetal, with a subtle waxiness. Smells kind of like a green salsa. Slight dark rye bread backing.

T/MF: A lot of pepper sweetness up front. I wasn't expecting that. A lot of sweet, dark rye, as well. It is quite sweet, in general. Light piquancy. Subtle waxiness. Some sweet char and char smoke. Graphite. Chocolate cake. A hint of booziness. The sweetness is a bit much. It could have used some more smoke or hops to balance it a bit, but still quite good. It comes across as a dessert-y beer, but doesn't quite seem right as one.

Poured from a 375mL bottle, into a Belgian tulip glass.

Dark brown color with huge, creamy brown head, looks amazing. Aroma has sweet malt, dark sugar and some nice smokiness in the background. Taste starts quite sweet and malty, smoked chili follows with a medium heat and lingers for a long time. Finish is more roasty and bitter but overall the beer leans towards the sweet side. Full bodied with a velvety soft mouthfeel. ABV is hidden extremely well, you only get some heat but it's combined with the chili heat and doesn't really bother. Really tasty beer with a nice smoke and chili flavor. Maybe for someone who doesn't like chilies it's a bit too hot but for me it's ok.

37cl bottle. Pitch black, with a very tall and fine-grained tan head that sticks around for quite some time. Smells of smoke (like in a rauchbier), cocoa, dark chocolate and roasted malts. The taste follows the same notes, with an addition of milk chocolate and lactose. Medium bodied with a smooth texture and a very hot aftertaste due to the chillies.