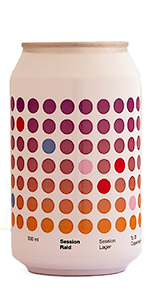 Notes: None
View: More Beers
Recent ratings and reviews.
3.6 by Robertas from Lithuania on Feb 15, 2019

This is a delightful beer. As expected by the style it's well balanced, combining a sweet grassy & citrusy sweetness with some minor hop notes in the finish. Mouthfeel is light with just the right amount of carbonation.

As far as I am concerned, this is more or less the perfect example of what this is going for. Light, enjoyable, and complex enough under the surface. This is A+++

A: The beer pours with a translucent, golden straw color. A slight haze to the beer. A fluffy, bone white head that juts out atop the edge of this Pilsner Glass like a snow capped mountain peak. Tons of lacing. Minimal amount of visible carbonation.

S: Slightly skunky. Grassy. A cooked grain aroma reminiscent of the aroma that hits you when you walk into a brewery.

T: The flavor of this lager is very mild. There’s a mild crackery element. I feel like it wants to be bitter but it’s not. It’s a little grassy and slightly dry on the finish.

D: I was not a big fan of this beer. I feel like it was a bit stuck in the middle of a session IPA and a pilsener. Not much of a need for this beer for me. However, I think that’s exactly what it’s supposed to be. So, there’s nothing wrong with it and I would say it is a drinkable beer if you’re looking for something low ABV with more character than an American adjunct lager and more along the lines of a pilsner.

Pours a clear yellow with a finger thick cap of head.

Smell is clean and bready with some floral notes in the back.

Taste is clean and crisp, with a soft breadiness carrying some floral hops and a hint of grass.

Overall, a good, easy to drink lager. Quite refreshing.

The colour is gold, the liquid clear. The two fingers head is warm white and compact; it sinks slowly down to a thick lid leaving thick lacing on the glass.

The smell is clean with candy-like sweetness and citric hops. Hints of water melon and green twigs.

The taste is light, clean and fresh with passing sweetness. Citric peels and some exotic fruits in the background. Smooth yet distinct bitterness. Light to medium body. The aftertaste is light and balanced with citric peels, elegant sweetness and just a touch of paper. The short finish is somewhat bitter.

The carbonation is medium strong; the few mid-sized bubbles are long-lived. The liquid is light but not watery.

Quite a light pale lager, this one. But it still manages to be clean with some new-world hops.