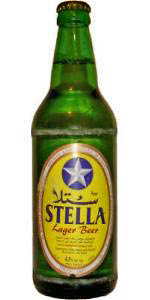 Reviewed by MarkoNm from Slovenia

2.72/5  rDev +5%
look: 2.75 | smell: 2.5 | taste: 3 | feel: 2.5 | overall: 2.5
Pours a golden color with an average white head that soon settles down to a ring around the edge.
There is hoppy aroma of avergae strength.
The taste is sinitially slightly sweet followed by a decent bitternes for a lager. Finishes nicely with enough bitterness.
Extra refreshing on the hot Egyptian sun, but otherwise nothing out of the ordinary really.

Reviewed by Garrettshu from Texas

2.56/5  rDev -1.2%
look: 3 | smell: 2 | taste: 2.75 | feel: 3 | overall: 2.5
Stella is the Egyptian version of Budweiser. Contrary to some other reviews on here, it has no relation to Belgium's Stella Artois, or to Heineken. It is brewed by Al-Ahram, a government conglomerate that also publishes the most widely-read newspaper in Egypt. Stella is macrobrewed by young men doing their government service, and therefore varies widely from batch to batch. You never really know which kind of Stella you're going to get. I've had many of them during my study abroad semester in Egypt. It's relatively widely available (and especially in a city the size of Cairo, bars are too). Around 11% of Egyptians are not Muslims (and even many of those who are continue to drink alcohol), so there's a considerable alcohol-drinking minority in Egypt, far more than given credit.

Taste-wise, Stella is mediocre. At best, it tastes similar to a Heineken, and is slightly more drinkable, thanks to what tastes like a higher carbonation. At worst, you are better off switching mid-bottle to Sakkara, the second-most popular beer in Egypt, which is slightly more expensive. Stella really isn't the worst beer in the world; if you're a beer snob, you probably won't be drinking in Egypt at all, but if you're having a few with some friends, Stella works just as well as any other mass-produced lager you could find. They are also (by Western standards) quite cheap; at most, you'll pay about USD 2 in the swanky Zamalek and New Cairo bars, and less than a dollar at the hole-in-the-wall, drink-behind-a-screen joints downtown.

Oh dear: this is one bland brew and it doesn't hold it's looks for long either.

Clear body of very pale straw coloured liquid: the head that appeared disappeared just as quickly to leave a mini wisp and thin collar around the glass.

Wet cardboard aroma, dry and metallic taste: this isn't good. Wish I had someone to share it with (this is a live tasting).

2.87/5  rDev +10.8%
look: 4 | smell: 2 | taste: 3 | feel: 3.5 | overall: 3
When your in Egypt there is really only two beers to pick from....and generally these are only at Hotels or main stream restaurants that cater to the West...so beggars really cant be choosers. Stella is the typical American Adjunct/Euro Pale beer. The color is clear crisp golden with great carbonation that keeps rejuvinating the white head. Smell is typical grain, malt, and hops. The taste mirrore the smell. Mouthfeel is fine its easy on the pallet and drinkable. Overall its ok.
Oct 08, 2011

Reviewed by EwaldEichstaett from Jordan

Also, this review may be a bit biased as I have not had a good beer (or much beer at all for that matter) in months...

A. Pours pretty nice white frothy head. The color is a pissy yellow, but what can you expect from a pale lager? It left good lacing on the glass, but the sun may have helped that.

S. There is a decent malt smell here, a little bit skunky and sour but not too bad. Actually, this is brewed by Heineken so.... haha it is not bad at all.

T. The taste is mostly a watery grainy flavour There is something slightly sweet about it and there is a hint of hops at the end. The hops are actually quite nice, not strong enough, but they lend a good flavour and rescue this beer from a much lower rating.

M/D. Bubbly medium light water. It is not great in the mouth and really not too drinkable. It comes in nice big 500ml bottles. I would only have 2, skunkyness and lack of flavour really turn me off... for this reason I don't usually drink pale euro lagers... or beers from Heineken (yuck) for that matter. But honestly, besides all of that, it is not a bad beer...

Reviewed by BeerisfoodLLC from Maryland

M - Light bodied, this is the bud light of the Middle East.

D - Its almost like water, you could drink it all day!

Reviewed by Brabander from Netherlands

Pouerd in a simple Dutch beerglass the beer looks good. Some carbonation and a decent head.

I drank the Sakara beer when i was in Egypt but this Stella is a bit better. Somewhat dry taste and i got some orange smell with it.

Reviewed by kwjd from Canada (ON)

2.93/5  rDev +13.1%
look: 3.5 | smell: 3 | taste: 2.5 | feel: 3 | overall: 3.5
This is my first beer from Egypt, so I'm intrigued. It pours a straw-yellow with small white head and a little bit of lacing. The smell is faint, but I get a small amount of grassy hops. Taste again is pretty muted, but there is nothing off about it. Carbonation is pretty understated. This could work well for a hot day, which I guess happens frequently in Egypt. Nothing special, but I did prefer this to many macro lagers and even the other Stella.
Jul 13, 2010

Reviewed by jeranbrews from Oklahoma

2.8/5  rDev +8.1%
look: 3 | smell: 3 | taste: 2.5 | feel: 2 | overall: 3.5
A - A blue can with a white star inside a gold label. English and Arabic writing on the can. There was a lot of white foamy American adjunct style head. And good continued carbonation that continued for a few min. The head retained well too staying until the end of the party. The beer itself was very clear and lemonade yellow.

S - Foamy, straw, adjunct malts (although the ingredients on the can don't mention them). Surprisingly none of the normal can aluminum smell and just a fair amount of pale malt smell.

T - Pale malt flavor. Not bad but not complex. There was a sharp aftertaste. The balance from the begining to the end was not that great.

M - A bit thin in the middle and rough on the edges.

D - A beer for people who can't drink beer or even find beer. Not a bad average-ish flavor. It's a compromise, in a country where 99%+ of people don't drink alcohol this is a good enough substitute for the few that do.

Reviewed by mjw06 from Pennsylvania

A - Very pale, transparent, golden color with a minimal head that disappears almost immediately and leaves no lacing.

S - Smells much like your average American pale ale macro, however much hoppier, with a stronger stale cereal smell.

T - Very bitter almost immediately and finishes the same way, all the way until the aftertaste.

M - Very watery and highly carbonated, but oddly enough the carbonation doesn't distract from the taste. It actually emboldens it and makes it seem more bitter.

D - Despite what I mentioned in this review, the beer is drinkable. I don't know if this is actually the case, or because of the severe lack of selection in alcoholic beverages in Egypt. Have a few and soon enough you won't even notice its bitterness and extreme amount of carbonation. Does the job, but not something to actually enjoy with a meal or as refreshment during a hot summer day in the desert.

Reviewed by genaro from Massachusetts

2.03/5  rDev -21.6%
look: 2.5 | smell: 2 | taste: 2 | feel: 2 | overall: 2
Once poured from its green bottle one has a light gold lager, with slight lacing and.
a small head that quickly dissipates.
Its appearance is pretty good lit by candlelight, and that's its best point.
The aroma was slightly skunky and the taste grainy. There was little carbonation.
The finish was kind of flat and dry.
Overall, not pretentious or very good. Yet this seemed to be the beer everyone was drinking, albeit the choices were very limited.
It was thirst quenching and maybe that was the real reason why I never finished a bottle.

Reviewed by thielges from California

Before going to Egypt I had contacted a fellow homebrewer. He was an expat from England working at a Cairo bank for a few years. When I asked what the good beers were in Egypt he told me "You should try Stella. When you get tired of that, switch to Stella. And don't forget to try Stella and then you will have tried all of the beers in Egypt."

True enough I never saw any other local brand for sale anywhere except for the "Stella Export". Well it turns out that my local contact was more right than I could have imagined. You see the brewers of Stella have really poor quality control. So you can't judge this beer with just one try because it's actually several beers depending on how the batch fared at the brewery and how it was stored on the way.

At its worst, it was a stale skunked out beer that seemed like it must have spent a few days sitting in the hot sun (imagine that ... in Egypt ??). At its best it was something line a standard off-brand Eurolager.

My personal fave is a batch that I started calling "the Belgian". This batch was flawed in the sense that it was infected with a wild yeast giving it a sort-of Belgian flavor. Whenever I came across The Belgian, I'd always grab another.

This is one case where I was thankful for poor quality control : it restored variety in a monoculture !

Reviewed by aforbes10 from Iowa

1.9/5  rDev -26.6%
look: 2 | smell: 2 | taste: 2 | feel: 2 | overall: 1.5
Thanks to shivtim for the little can. Very clear, sparkling apple juice look, with a puffy white head that shortens up quickly. Very little odor..hint of alcohol, mild hops. Crisp, strangely grainy tasting. Basic barley-malt, notes of apple, butter, ethanol. Crisp, bitter bite. Thin bodied, not much to it. Eh. Stella re-brewed for an Egyptian audience. Who cares (besides the awesome can)
Aug 19, 2008
Stella from Al Ahram Beverages Company
Beer rating: 66 out of 100 with 48 ratings