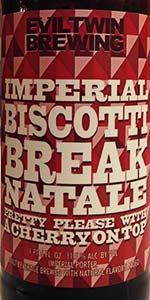 Notes: The Holidays brings out the best in some people. However if the Holidays also is a tough one for you, this beer will definitely sweeten dark times of endless caroling and difficult domestic obligations. Did Imperial Biscotti Break also make your sugar levels rise and the bitter sweet flavors of coffee, almonds and chocolate very sentimental - this one has a sour cherry cherry on top. Forza Imperiale.
View: Beers
Reviews: 132 | Ratings: 992 | Log in to view all ratings and sort
Reviews by macrosmatic:

Reviewed from notes. Poured from a 22 oz. bottle into a Cycle Brewery goblet.

A: Black and opaque, with no real visible carbonation after it settles from the pour. A half-finger of tan head with good retention.

S: Chocolate and roasted malts, less coffee, and that toasted sugary sweetness that seems to be part of the Imperial Biscotti series. I’m not really getting cherries…but it’s still pretty nice.

T: Roasted malts and chocolate. Ahhh…here’s the sweet cherry flavor - almost a maraschino cherry flavor, but not in a bad way. Again, that Necco wafer/toasted sugar sweetness, but it doesn’t strike me as a particularly sweet beer overall. Bitter coffee and bitter roasted malts take a step forward after the swallow. A little ethanol heat bubbles up and adds to the chocolate–covered cherry aspect of the beer.

M: Full-bodied but not terribly thick for an imperial stout. Low carbonation sensation. The alcohol is very well-masked for over 11%.

O: Enjoyable, but I don't think the cherry adds anything; it may even detract from a very good imperial stout. Glad to have tried it, but I don’t think I’d actively seek it out again…or pick it over the base beer.

A delicious variant of one of the best imperial porters around. Tastes like an IBB with sour cherry juice blended into it. Nothing artificial coming out of the nose or taste: balanced.

A: The beer is jet black in color and poured with a half finger high dark tan head that died down, leaving a thin layer of bubbles covering the surface and a collar around the edge of the glass.
S: Light aromas of dark bittersweet chocolate are present in the nose along with some hints of sour cherries.
T: The taste follows the smell and has flavors of bitter chocolates along with notes of roasted malts and hints of sour cherries. Only faint bits of alcohol are perceptible.
M: It feels a bit more than medium-bodied on the palate and has a moderate amount of carbonation.
O: This beer drinks a little more than an American Double/Imperial Stout compared to an American Porter given its fuller body and richness of the flavors but is still extremely easy to drink considering its strength as it hides its alcohol very well.

This one is pretty great. Tons of great flavor and nice cherry on the finish. It is a little thinner than I thought it would be, but still delicious.

22oz bomber with no freshness date. Served in a friggin awesome 22oz snifter.

Appearance: Pours black with &lt;1 finger of a dark tan head that settles into a thin ring. Body is completely opaque.

Smell: Roasted malt, chocolate, coffee and a light sour cherry which gets stronger as the beer warms

Taste: Combination of malt sweetness and a slight tartness upfront followed by roasted malt, dark chocolate, vanilla. Other than the previously mentioned tartness, I'm not really getting any cherry character.

Overall: A good beer, but falls way short of the regular Imperial Biscotti Break. Worth a try if you see it, but not worth seeking out.

Sweet bready taste with chocolate malts, bitter coffee, and a sour finish from the cherries. The alcohol is well hidden beneath the overwhelmingly good favours this beer has to offer.

May 30, 2014
Imperial Biscotti Break Natale - Pretty Please With A Cherry On Top from Evil Twin Brewing
Beer rating: 93 out of 100 with 992 ratings