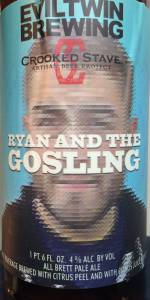 Man, "Bock Me & Bock Yinz! I Almost Forgot That It's New Evil Voodoo Twin Ranger Beer Sunday (Week 745)" is simply outta control, yo! I wildly overamped on today's excursion & I am paying the price as a result. Well, not totally since I took a tab of Prilosec to ward off the impending heartburn from this & the previous entry.

From the Bottle: "Hey girl - just listening to you talk about how the 100% brettanomyces with CMY-1, CMY-5, CMY-7, along with the mash consisting of pale 2-row, Munich II, oats, wheat and honey, together with citrus peel and juice that is added at KO, followed by fresh zest with balanced citrussy hop characteristics at whirlpool - makes me wanna drink this beer just for you."

I Pop!ped the cap, but I also noticed a modicum of lees on the kick so I consulted both the site's Style guidelines as well as BJCP. Both agreed that clarity was okay & cloudiness was likewise acceptable. Sehr gut! I am a stickler for clarity, especially when it is natural. The barnyard scent came streaming out of the bottle's neck & opening like it had been bottles up for so long that it cried out for release. 8=O Full-on Brett, like Brett Sommers-level Brett! It was enough to gag a maggot, which is probably why it had not sold before going on clearance. I smelled septic tank like I had not smelled since my maternal grandparents' tank ruptured in the 1970s. Brutal! My pour was nice & gentle as I kept my gag reflex in check. It formed just under two fingers of foamy, soapy, rocky, bone-white head with exemplary retention for the style. Color was a gorgeous Golden-Amber (SRM = > 5, < 7) & The Gelt Gang of Croesus, Midas & Mammon joined me for a sip until they got a whiff of this concoction & bowed out. Phew! It smelled like cheese, Boy's locker room, cow droppings, horse sweat & simple putrefaction. It is like the old saying about something else: "Once you get past the smell, you've got is licked!" I am a retired US Navy enlisted sailor & I have smelled MUCH worse. Let's get it on! Mouthfeel was medium, but barely. That was never going to be its strong suit. Oh man, the taste was like being in the middle of a working farm & trying to drink water while taking a deep breath! The nose was far more pungent than the taste although it had a really rank cheesiness in the mouth. It reminded me of fresh, ripe farmhouse cheese in France. I made it there numerous times as a plankowner on the USS Normandy & with four years of Middle/High School French under my belt, plus a love of languages, I became pretty proficient. On one visit, I wangled us a visit to a farm, via cart from the local bar. We ate like kings & the soft, fresh Brie tasted a lot like this. NOT the export shite that you are probably used to, but real cheese with terroir. This was a beer that cried out for (sharp) cheese & crackers. Bump wine! I'd proudly serve this with the appetizer course. Warming, it not only became more pungent 8=p but it also took on a beautifully cool mintiness, like eucalyptus. Mmm. Like I said, get past the smell … Great Gott Dang, but this was really good! I can see how it might be a tough sell, given its reliance on Brett, but if you ever wanted an entrée as to the yeast strain, this would be the way to go. Finish was bone dry. Gaspingly dry. Dry as the Zephyr winds blowing across the Sahara. Dry as my bank account. 'Nuff said. Phew! I was left stunned. I was entirely thankful that I popped a Prilosec going into it, but man, what a find & on clearance, no less.

22oz bottle poured into a chalice. No date, but if memory serves, this has been kicking around in the fridge for about 3-4 years.

A: Sunny golden color with great clarity. Fine-bubbled white head settles in after a time. Small patches of lace slide back down to the liquid line.

T: Follows the nose. Nice brett character with a lot of musty and dusty yeast flavor. Bone dry, as expected. Touch of nutty grain and honeyed cracker. Citrus was more subtle than expected, though certainly there. It brings a very mild acidic tartness. Tough to say which fruit, or fruits, were actually used. I'd guess a sweeter orange varietal and perhaps grapefruit or lemon. It comes across a bit sauv blanc-like actually. Quick and dry finish sees brett and citrus evaporate from the palate.

M: Light in feel, though there's a bit of a creamy and chewy texture, probably due to use of adjunct grains like wheat and oats. Carbonation has a firm but gentle scrub.

O: Fairly straightforward, not much complexity here. It's a light and easy quaff with an easygoing brett character. A good "dip your toes in" beer for people who need to get a first-time feel for brett.

On tap in a tulip. Reviewing this one the day after, so I don't have notes. I'll keep it short.

Pours a hazy orange. Nose and taste are both very saison-like. White wine, lemon, orange, minimal funk. Low bitterness. I enjoyed this one. Refreshing and sessionable at 4%. This was marked simply as a "Pale Ale" on the taplist, so I wasn't expecting the brett, but it works. The "funk" is tame.

A: The beer is a light gold color, with a large foamy white head that fades slowly and leaves a thick lace on the glass.

T: The taste starts out with a grassy hops bitterness followed by some wild Belgian yeast funk. Then some mildly sweet flavors of citrus and caramel come in. The malt character is hearty but not too heavy and brings a little bit of balance. The after-taste is slightly sweet.

O: A little tasty, goes down easily, not too filling, very mild kick, decent representation of style, this is a decent beer to drink for a while.

A: Poured into a Duvel tulip to a bright gold with a finger of dense white head that fades to a small pool with minimal lacing
S: Smells very citrusy on the nose along with some barnyard funk and horse blanket from the brett
T: Taste is a nice bit of juicy citrus up front before the funk and horse blanket comes rolling in. Slight band aid and medicinal quality as well with some pale malt flavors coming and going. Swallow is more citrus with the funk coming in on the back end with the barnyard and horse blanket before fading to band aids. Slight sweetness on the finish as well.
M: This beer is in the middle of the road when it comes to the body with soft carbonation and a drying finish
O: An impressive amount of flavors and complexity for the ABV. This is definitely an enjoyable drink and one to try if you like funk but not sour.

A: Pours a pale gold with an off-white head which thins into a ring that laces nicely throughout.

S: A brett barnyard fest. It's subtle and not overpowering, but brettanomyces doesn't need much to make it's presence known. There's a little hops in there, as well.

T: A clean, almost Saison character, followed by pleasant hop bitterness. A touch of funk settles on the back end, but the sour presence is small compared to the hops.

M: An almost light body with crisp carbonation that scrubs the palate well.

O: Very interesting. Lots of wild funk in your face at first, but it sits well with the pale ale characteristics. Some may not care for the brett, but for what this beer is, it's quite well done. Cheers!

This is a stumper, it's like a mix between an IPA, saison, and wheat beer.

At first I get a lot of grassy hay notes. Then there are floral notes. I was actually sitting next to one of the new bartenders and her thought was begonias, so I'll take her word for it.

Hops provide a bitter citrus bite, but not too much.

Light and refreshing, crisp on the tongue.

This beer pours a hazy, medium golden yellow colour, with two fingers of puffy, tightly foamy, and somewhat creamy bone-white head, which leaves a bit of rocky landscape lace around the glass as it slowly seeps away.

The carbonation is fairly understated in its plainly rendered fruitiness (it's no Jared Vennett), the body a so-so middleweight, and sort of smooth, once your Brett cognitive dissonance machine (if you are lucky enough to possess one) kicks in. It finishes trending dry, even with all that slowly evolving orange fruitiness lingering about.

Overall, a pleasing and engaging all-Brett ale, one where a certain balance is achieved via amping up some corresponding fruitiness by whatever means available. I won't be returning to this one, but if you're a fan of this particular beastie, I would recommend that you give Ryan and the Gosling a whirl.

Pours a hazy, gold color. 1/3 inch head of a white color. Great retention and good lacing. Smells of bacterial funk, strong yeast, hops, slight grass, hint of mustiness, and slight floral notes. Fits the style of an American Pale Ale. Mouth feel is sharp and crisp, with an average carbonation level. Tastes of slight yeast, bacterial funk, hint of hops, hint of pale malt, and a hint of mustiness. Overall good appearance, aroma is very indicative of a Crooked Stave brew, the blend, of what body you can discern, is good though the body is quite subdued compared to the aroma.

A – Light to medium gold, and moderately hazy, like an unfiltered farmhouse ale. Pure white foam stand of about an inch is slightly craggy and takes its time on the way out. Like sunshine in a glass.

S – Lemon, meringue, a creamy impression. Definitely a fruity Brett beer, with a ton of straw/hay and funk, like a well-blended gueuze. Malt notes are flour, sourdough bread.

T – Lemon-lime soda, a touch of Chardonnay grape-like notes, and noticeable but reserved funky barnyard notes. Flour and undercooked bread malt flavors. The sourness/funk of the Brett is complementary, allowing the fruitiness to shine. Outstanding.

M – Carbonation is very high, with a light body. Well-attenuated and dry throughout, an extraordinarily brisk, refreshing feel. Low residual sweetness, which is scrubbed by the carbonation, and not bitterness at all. Perfect.

O – An outstanding, tasty, refreshing summer afternoon beer, which at 4% ABV can be enjoyed in large quantities. A perfect use of Brett by two masters.