I Love You With My Stout
Evil Twin Brewing 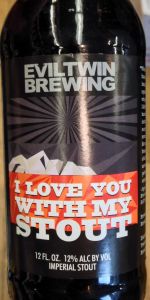 Aged bottle - maybe 5 years - ??more - no date but have had in cellar a while. Pretty sure a longstanding hold out from a four pack, the rest long ago consumed.
Pours inky black with scant reddish brown head - red highlights at edge of glass.
Aroma of dark fruits, raisin, molasses, brown sugar, and whiskey tinged chocolate.
Taste hits with a caramel sweetness, boozy dark fruit - dates, raisins, molasses, some dark chocolate notes, bourbon whiskey, a touch of roasty malt.
Medium full mouthfeel - not thick or viscous as may have expected - sweet boozy heat with nice carbonation - warming and smooth and quite delicious. Age did not hurt this one bit!

Dangerously drinkable. 12avb or higher now is simply masked in the complexity of the mouth.

Smell: There are aromas of roast and bacon like smoke. There are background notes of plum.

Taste: It has flavors of roasts and a bacon like smoke element. There are dark fruits at a moderate level most like plums. There is a hint of vanilla in the flavor.

Feel: It has a medium full body which is surprising considering the ABV. It has a smoky, roasty aftertaste. It has very smooth alcohol warming.

Overall, the aromas do not convey the complexity of the elements in the taste which is quite complex.

Black/brown hue with champagne bubbles throughout.

Notes via stream of consciousness: An Imperial stout at 12% ABV, eh? OK. It's a very dark brown that appears black in the full glass but also reveals some dark reddish mahogany brown highlights at the base of the glass. The head is a finger-thick cap of tan but I can see that it's already dwindling. The aroma expresses dark malt with some dark fruit (dried plums, raisin), something like rum, some bittersweet dark chocolate, and a delicate spiciness that's reminiscent of star anise. It's interesting; it's not what I was expecting. By now the head has dropped to a creamy collar and some whisky 'islands' on the surface, and there's no lacing left behind. On to the flavor... it's not as rich as I thought it would be, nor as chocolatey or roasty. There's a sweetness to it like brown sugar, and that rum note comes through as well, perhaps from the combination of residual sugars and alcohol. It's got a medium-dark caramel note to it, just about at the point where when you're making caramel it looks reddish brown. The plum remains, and I get more fig than raisin although there is some raisin in the lingering finish. Most importantly I'm still finding that note of star anise, and I sometimes get a hint of black licorice as well. There's some roastiness to it but it's only slightly coffee-like. There's a touch of molasses in the finish as well, and an herbal note which I'll assume is from hops, and which is most likely where the black licorice is coming from. It's bitter, that comes out in the finish, but upfront it seems sweet. The alcohol shows, mainly in the finish as well. Along with the sugary character that's there it has an almost whiskey-like quality to it. It's interesting, and fairly complex. Unique. In the mouth it's only medium bodied but it does have a bit of a dextrinous side to it. As for the carbonation, it's low, but perhaps in conjunction with the alcohol there is a bit of a bristle on the tongue. Overall I like it better than "Even More Jesus", which is mentioned on the label. It's unique, and worth trying.
Review #6,530

Red-hued black colour. Brown-tinted foam is slow to appear at first when poured cold, but it has considerable staying power.

Aroma is almost exactly that of a treacle-based (Finnish) Christmas bread, with a bit of smokiness peeking in towards the end. Fits Christmas flavours in this part of the world perfectly (if your ham is smoked). A bit of alcohol amplifies the aroma.

Taste is not _quite_ as sweet as the smell would indicate, and a strong presence of alcohol rises to the fore. Something faintly similar to whiskey and rum in those notes. A matter of taste if this is coarse or suits the context. After the initial shock I quite like it, but my feeling is that this would benefit from even upwards from 5 years of aging so the alcohol becomes mellow and complex. There are roasted flavours but they play a second fiddle to the burn. Smokiness is still there in the retronasal. Feel is good and carbonation suitable, even if at the upper limit.

Actually, I can see batch #014 as the latest one.. wonder how old this is then. It still has some quite sharp edges to it and I would lay it down for at least two years more. A sipper in the American vein.. bold and appealing but not particularly subtle.

An authentically American beer, without consecrations. Because I am a lover of Belgian beers, this type of beer is too hard for you. I recognize that this is a very good beer but it is too hard for me, too flat, too direct.

A: silky black color with a 1/2 finger tan head

M: heavier side of medium with mid carbonation

O: very rich tasting, but it has a lot of booze as well, expected for 12%. Sipper for sure

Aroma at first is milk chocolate mixed with a light sweet toffee smell, as it warms it goes to licorice and plums, warm it brings out lots of phenolic leather notes, alcohol aroma is similar to a sharpie marker, personally it’s very inviting

Some pretty solid bitterness at first but the taste follows the nose almost all the way through, milk chocolate to licorice then to leather, no alcohol presence

Overall one of my favorites from Evil Twin, I’d consider this a dessert brew since it’s so milky at first, highly recommend.

The smell is dark malt, chocolate, and coffee.

The taste is dark malt, char, tobacco, leather, and a little coffee.

Overall this has too much char and leather and tobacco for my taste.

Poured from the bottle.