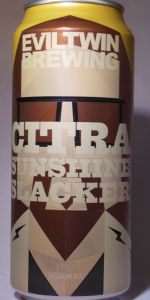 It pours a cloudy straw yellow under a huge long lasting white foamy head. It kind of looks like a heady glass of grapefruit juice.

That makes sense since the aroma does have a decent grapefruit character along with toasty pale malts.

The taste flirts quickly with toasted sweetness but the grapefruit and citrus hop characters fling themselves into the picture fast and hold on until the bitter end. Not bad.

i am coming to the realization that citra hops are less dynamic and awesome than everyone says they are, at least in isolation. for me, the citra profile is very distinct, but its very samey, citra this citra that, they all taste very similar. i think a lot of the new fangled tropical type hops are a lot more versatile, and can be used to produce different flavors. i like citra a lot, but i think i like it in conjunction with others better than by its lonesome. this is an awesome session ipa by all counts. its dead sexy in the glass, drop dead, with in fact a sunshine radiance and crystal clarity under a cumulus cloud head, its a fine afternoon in a glass. the nose and taste are all citra hops, held back or even balanced little by a very basic pale two row barley malt profile. not much going on downstairs in this one, but the hops are bright and fresh, and quintessentially citra. that fact being true, and my appeal to this beer on the whole only being in the 4ish our of 5 range suggests im a little bit over this one, at least in therms of what it does in ipa. flavorless yeast and base malt and citra is an equation that doesnt mean to me what it means to others. that said, i think they capture the perfect summer session beer right here, and other than being price prohibitive, it suits the seasons vibe really well. cool too that its a collaboration with 7th sun, who doesnt send beer to colorado.

Amazingly flavorful session. Citrus is very strong but not harsh like some others heavily hopped with citra. This is legit crushable despite how freaking hoppy it is

I knew what I was getting before I ever tasted this light bodied session ale. The name of the beer lays it right out for you. I felt like Fred Flintstone sliding off my dinosaur excavator, seamlessly sliding into my stone car, following the first sip. The beer rolled easily down the throat and dropped subtle grapefruit notes all the way to the bottom. Great summer beer.

Started off questionable with it's tell tale paleness that screams "I'm not well balanced!", well at least to me it does. Ginormous white foamy head that leaves behind just a touch of lacing.

Nice juicy and slightly spicy nose with a sort of sweetness to it as well.

I can taste a little straw or grass before a tiny bit of tartness. Further drinking provides little else other than a bitterness of nondescript nature. Maybe it's lemony, but overall it's a bit of a mess I especially considering how thin and soulless this seems.

This is the "session" IPA that may have very well ended my journey further into the hybrid style. If you want an IPA, this one teaches you to go full bodied or go home. Plenty of other great beers out that with a low ABV. Doesn't have to be IPA all the time.

At first i thought it smelled a tad lemony...until my wife pointed out that it smelled like vomit. Kinda like a bathroom after a day of flu puking. Now thats all i can smell, dilute barf. Taste follows the nose. Its not like full strength uncarbonated vomit, but more like dilute overcarbonated vomit. Highly carbonated, thin mouthfeel as expected for a session ipa. Would not buy another but highly recommend if you like puke beer. I drank the whole can.

16oz, self-described non-denominational 'pint' can. Y'know, for those who slack off in the sunshine, and further prefer the confines of the Citra hop varietal.

This beer pours a hazy, pale golden straw, um, 'colour', with three fingers of puffy, shiny, and somewhat rocky off-white head, which leaves some bleeding sudsy lace around the glass as it quickly subsides.

The bubbles are fairly active in their perky and penetrating frothiness, the body a generous medium weight for the purported sub-style, and plainly smooth, the hops more aromatic than interfering, it would appear. It finishes off-dry, just, as the varied character of the Citra hop continues to refuse to be denied.

Not sure why the 'other' twin decided to choose this particular hop to glom onto another one of these relatively weak-ass American IPA wannabes. Easy to drink, sure, and extra points for the tall-boy cans, but overall, I'm really getting tired of understated and underwhelming IPAs, which is all this next new failure of the craft beer cause really amounts to.

In canned format, aroma is full of citra hop which smells like unripe grapefruit. The taste is grapefruit and some mango, just a hint of creamy sweet malt flavor. Herb and grain notes pull through with the bitterness until the finish. Full body despite relatively low abv, its not thin in the slightest. Overall, a nice session IPA.

From Can. Pours hazy light golden Orange with white head that dissipates to a ring. Aroma of citrus, tangerine, light grain, mango and fresh hops. Taste is dry and light to medium bitter with notes of light mango, citrus, grain and light bread. very nice.