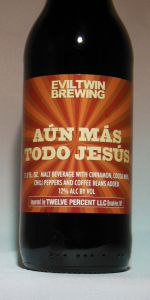 Pours a beautiful inky black, motor oil like with copious brown head.
Smells strongly of cocoa, leather, chili and coffee. Tastes is sweet malts with strong cinnamon and chili at the front, sweat cocoa, a lot of chili burn mid note and at the back of the tongue and transitioning to a sweet coffee/cocoa finish. Mouthfeel is medium to full bodied, the burn is off set by the sweet malts and cocoa and the finish is a bit sticky - no effervescence noted but not unpleasant. The complexity increases as it warms.

Overall, fairly tasty beer - I'm not a big chili fan - but I found the contrasting flavors rather pleasant. Evil twin does stouts well, and this is a solid permutation of their stout " Christmas eve in a new york city hotel room"

Smell is meh. Mostly green pepper vibes from the coffee and chilis.

Mouthfeel is on point. Very thick and creamy with an uncanny bakers chocolate dryness.

Overall good. Prob not $10/12oz good when I can get a Sunday mole stout for $4 but was worth the visit once.

ccg from District of Columbia

Opened and consumed side-by-side with a Prairie BOMB!, both poured directly from a 55-degree wine fridge into clean, large Pipeworks snifters.
L: Even with an aggressive pour, there is barely a quarter-inch of brown foam, and it dissipates quickly. It looks a bit flat, but that's not necessarily a bad thing of this style of beer.
S: Peppers are most noticeable on the nose, followed by the cinnamon. Some chocolate and vanilla are also present. From only the smell, I would not have guessed coffee was an ingredient.
T: Chili peppers are also dominant in the flavor. Chocolate and cinnamon are better balanced in the flavor than they were in the smell. As it warms, the coffee starts to make an appearance, but it continues to compete with the dominant chili pepper taste and burn.
F: I always enjoy the chewiness of Evil Twin stouts. I see other reviews complaining of a thin mouthfeel, but that's not what I'm experiencing. It's not quite as thick and chewy as other E.T. Jesus-series stouts, but those stouts are all way above average.
Overall: excellent! The description made it sound almost identical to Prairie BOMB!, so I decided to drink them side-by-side to do a direct comparison. I think BOMB does a better job of balancing all the flavors, whereas Aun Mas Todo Jesus is dominated by chili peppers and, to a lesser extent, cinnamon. With BOMB, the coffee component is much more noticeable, but it's perfectly balanced with the chocolate and vanilla, whereas with Todo Jesus you have to look for the coffee component until the beer warms up halfway to room temperature.

Holy chili batman......as this bad boy warms up it envelopes your palette with coffee than a bit of chili then burnt chocolate and then some more chili. Really a mind bending experience from the mad scientist brewer himself

Evil Twin is how I learned how to appreciate beer, so this is an unabashedly biased review - but here goes.

Smell - Fragrant. Chili right on the nose. You smell that licorice thing that ET does so well immediately after, as well as some cocoa and a bit of dark fruit.

Taste - Fantastic. You get the typical prune-cocoa-espresso flavor--as well as the big boozy taste--of an ET imperial. Not as much licorice in this one. A lot of chili action runs parallel to the profile, coming in especially as the other tastes run their course. This beer manages to tastefully bring the flavor of the pepper without the heat, although that's not to say it isn't spicy.

Feel - Thick, but not the thickest I've had by ET. Definitely has some richness going on immediately, but it dissipates well and contributes to the surprisingly refreshing nature of this stout.

Had to snag one of these while I was on vacation.

On the nose, the chili peppers and coffee come out the most. A chocolate sweetness finds its way in as well along with black licorice aromas.

In the flavors you get much more of a presence of cinnamon to balance out a bitter coffee and dark chocolate profile. To round it out you get those chili peppers that leave a lasting spiciness.

Medium bodied, with a low carbonation that are crucial to working with the chili heat. Smooth, with only slight stickiness.

A great stout, reminiscent to Hunahpu’s Imperial as far as profile. Bitter coffee and chocolate, hints of cinnamon, and a chili heat to round it out.

Very dark appearance with no head or carbination. Aroma is a mild coffee and cinnamon. Taste is somewhat bitter with mild coffee and vanilla that is a little hollow for my taste.

Chili Jesus with coffee and cinnamon added. Phenomenal spiced stout. A bit on the peppery/heated side, but it works very well for some odd reason. Probably my favorite variant of the phenomenal Even More Jesus.

Poured from a 12 oz bottle into a snifter glass.

Smell is a ton of cinnamon, coffee, chocolate and roasted chilies (perfume-like). The chili flavor has a nice hearty/meaty flavor coming through. There also might be a hint of vanilla coming through.

Taste is very complex with vanilla, dark chocolate, coffee and cinnamon flavors colliding up front. There is a nice lingering spice from the chilies on the back end. There is a decent amount of sweetness, but it is not overwhelming (could be reduced on the finish though). The bitterness is fairly high as well in which everything somehow works well together.

Mouthfeel is thick and creamy up front with a nice kick at the end from the cinnamon and chilies.

Overall this is an outstanding Mexican stout to drink after a long day sitting down after dinner. There is an explosion of flavors, but this beer is surprisingly drinkable. All of the flavors somehow come through with the cinnamon and chocolate most prominent. Creamy feel ... excellent beer.

APPEARANCE: pours motor oil black. No head on my pour but a few small mahogany colored bubbles along the edges

AROMA: cinnamon dark chocolate fudge, very light on the coffee with more pepper skin and cinnamon as the beer warms

TASTE: the beer has a very nice thick body to it. Up front it has some expresso and dark chocolate bitterness. Then, I was immediately hit with the lingering heat of the pepper. The heat did not go away on the back end. Definitely a beer with some heat and not just taste. Cinnamon kicked in on the after taste in my cheeks but not anywhere else for me.

OVERALL: a very strong and solid beer. Alcohol is hidden very well for a 12%. The pepper taste is a little overwhelming for me and I wish it was a little more balanced like a Prairie BOMB! But keep the heat profile it would be perfect for me. Overall a great beer. I would love to see what a few years would do to this beer.

Pretty good Mexican Style, but not in my top 5. Flavor profile is nice, but lacks some character.

Pours black, with a little bit of dark caramel colored fizz that almost covers the top of the black liquid when poured aggressively. Absolutely lovely dark chocolate, chili peppers, coffee notes to form a rich and complex aroma. Smooth dark chocolate opens up the flavor profile, with coffee and roasted malts following, and a little bit of a chili pepper sting at the end. Great complexity, while still remaining balanced. Admittedly, mouth feel is a little thin and a bit lacking. Overall, a great beer. Plenty going on in each sniff and sip. The mouth feel just doesn't quite follow with how well everything else is done.

Shiny black with a half finger of a dark mocha head that dies to a thin ring.

Spicy, smokey chili peppers hit you in the mouth right away, with light bitter chocolate, followed by tons of cinnamon. Coffee takes a backseat in flavor. The aftertaste is quite spicy down the throat at times. I randomly get a stale flavor here and there.

To me, this is most comparable to Mexican Cake in the chili stout pantheon. There really needs to be a category for this style of beer, it gets hard to compare after a while.