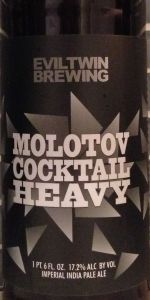 Despite the crudeness it is tricky to make an effective Molotov cocktail. Despite the unruly nature of the rebel it is very tricky to resist accepted conventions. Molotov Heavy is a tour de force in rebellious hoppiness, it’s a heavy spark for action and by far one of the most anti-authoritative beers ever made by Evil Twin Brewing.

The best beer I've ever had!

Almost opaque hazy deep amber with a thin head..Oh, now it's just a ring. LOTS of sediment on the bottom of the pour. Smells like a mango that was drowned in some high dollar grain spirits. Taste follows this with the hops trying to punch it out against what is obviously a massive malt bill. Fairly sweet with a just less than caramel viscosity. I don't think any carbonation in this brew even makes it to the top of the glass. This is a man's beer if there can be such a thing. Super heavy duty! I LOVE it.

I read a comment that said if you like Dogfish 120, you'll love this. So I figured I'd try it out. It's definitely enjoyable for somebody looking for an extreme/ triple IPA. Pours quite amber with a lot of sediment floating around. Cream head that dissipates rather quickly. Honestly, it's not a great looking beer. But for what it's missing in looks..it makes up for in everything else. Oh only if the human population worked like that. It works the other way around I guess. Anyway. Aroma is candy and alcohol - a lot of the hop character seems to have taken a back seat in the year this has been sitting on the shelf. If anything, there is sweet orange and pine. Taste is very much alcohol, and caramel. The bitterness and high carbonation really help to balance out the taste. Overall, I like it. Would definitely try it again fresh.

Pours a foggy burgundy-brown with heavy particle suspension. Head formation is a finger and a half of khaki foam. Head retention is okay with great lacing. Aroma is pineapple, guava and orange right before an explosion of heat. It's 17.2% ABV, and it's not shy about it. Caramel, biscuity, bready malts add kisses of sweetness and bitterness, but overall - the heat is dominate. Flavor profile is pineapple, guava, orange and papaya with toasty, biscuity, caramel, and bready malts. There is a big explosion of tropical and domestic fruits, before a glimpse of malts and then a shot of heat. Mouth feel is thick, with particle suspension apparent to the tongue. It's grainy. Overall, big, big IPA, but that's no guessing matter with the ABV. Despite the double to triple alcohol of most IPAs, this still has some abundant and bountiful hop and malt play that don't totally alienate the tongue, although it's not super easy going either.

Obviously an over the top beer , too much of everything for my liking but I always try the big ipa's just for kicks..

Today is the ocCANsion of my New AmeriCAN India Pale Ale Sunday (Week 702) & this is my first entry of the day, all of which will be spent in the furtherance of The CANQuest (tm).

From the CAN: "Despite the crudeness it is tricky to make an effective Molotov cocktail. Despite the unruly nature of the rebel it is very tricky to resist accepted conventions. Molotov Heavy is a tour de force in rebellious hoppiness, it’s a heavy spark for action and by far one of the most anti-authoritative beers ever made by Evil Twin Brewing."

Heavy?!? Spendy is more like it! This has to be one of the most expensive CANs that I have ever purchased. Still, in Evil Twin Brewing I trust & so I made the outlay.

The Crack! was like the Sirens' singing to mine ears & I utilized a Gussie Busch Glug (straight into the C of the glass, NEVER gently down the side) to produce two-plus fingers of dense, foamy, rocky, tawny head. Its retention was excellent & left a load of sticky lacing like the glass was the star in a bukkake film! Color was a beautiful Deep Amber/Light Copper to Copper (SRM = > 13, < 17) with NE-quality clarity, putting me in mind of an old flame's flaming hair color. However, as it warmed, it beCAN to show evidence of floaties. Nose was as filled with pine tar as the end of George Brett's bat on 24 July 1983. Mmm. As a self-described, self-avowed hophead, this is the kind of thing that got me hooked years ago & turned me into a hops junkie for a period of time. I no longer jones like I once did & the monkey on my back that turned into a screeching gorilla has subsided, but I still enjoy chipping, which this was going to acCANplish. Mouthfeel was big & thick, like a dollop of hops pudding in my mouth & on my tongue! The taste was cool, minty, pine-like, but with a fusel alcohol presence that stood out like an elephant trying to hide behind a bamboo reed. Phew. Hey, I wanna get where I'm going, but there is just NO need to do it at 110 per! Jeez-O, man! I will say this for it - it was unquestionably (at least) an ADIPA with a tasty bitterness that had nothing to do with hazy lactose, southern hemisphere tropical fruitiness or any of the other nonsense that has recently been cockblocking my ability to catch a hops buzz. Speaking of a buzz, was I supposed to operate Heavy machinery later today? Man, I just started with this monster & I've already fallen off of my chair & I'm wondering how I'll get downstairs later. Some clown just left, oh, right, he's The Joker. Yeah, well, take that b**ch, Harley Quinn with you, man! How was I to know Little Miss Roundheels was yer squeeze?!? Sweat is pouring off of me & it doesn't seem to have anything to do with humidity. Man, how did they get those pinwheels to spin so fast when there's no breeze? What? It's my eyeballs that are crating that effect?!? Groovy. Okay, I have now put away 1/4 of the CANtents & I am ready to call a friend for assistance. No, offisher, I only had just the one beer before I left to work on the demo site with the wrecking ball. Getcher hands offa me, ya bull! The fuzz CAN't get away with this kind of abuse of a fine, upstanding citizen such as myself! Somebody get some video & make it go viral. This beer is NOT going away! My lips have developed a sticky coating that, when licked, remind me of licking the sap from a pine tree. Mmm. Maybe I should go lay down for a bit. Has anybody seen my brain? I could have sworn that I parked it over there. This is really starting to grow on me. Honey, let's hit the ATM on the way to the beach. I wanna buy a coupla sixers of this to put inna cooler! Finish up, GEN Woody, I wanna get there TODAY! Aw, baby, I'm almost finished, I swear. Whyncha drive & I'll pass out, I mean, take a nap. Finish was dry with a cool burn like fumes emanating from oil of wintergreen on a hot Summer's day in the chem lab. Phew! Leave this one to the professionals. Do try this at home as elsewhere CAN have serious CANsequences on yer wallet & yer freedom! Down with the pigs, man! Lemme outta this crazy cell!

Appearance: Slow pour yield (to try and leave the sediment behind) gave a translucent-hazy amber beer, with a 1/4" tan foam, and some sediment that did come along that was quite chunky. Not very appealing in appearance. Some small islands of lacing that slide back down the glass and dissipated. I would have given it a whole point higher if it didn't have all these floaters.

Mouthfeel: Good thickness, approaching creamy. A bit sticky on the teeth. Warming finish from all the alcohol, very light carbonation.

Overall / Drinkability: This is one potent beer - after just a few sips I can feel the alcohol. A slow sipping beer, but maybe a bit too powerful and aspects of the imperial IPA are lost under all of this. The hops are there, but this reminds me more of an American barleywine than a massively hoppy IPA. I wonder if I had poured along all of the sediment if I would have gotten a different tasting beer. So good and very boozy, but not great.

Served in a tulip from the can.

Appearance: Semi cloudy Goliath Amber color with medium bubbles and heavy sediments on the body. Head comes off a slightly orange tinted white head with sticky lacing on the glass.

Smell: Heavy alcohol scent, you smell almost like a sweet malt aroma but it's light. Dissipates quickly from the nostril.

Mouth: Sticky with a full body after taste. Carbonation is medium

Overall: Good brew, was expecting a bit more especially considering the brew was made at Westbrook but still a nice pick up. Always in a glass, Salud!

Pours murky amber with a medium sized head and a few fish-food floaters. Smell is boozy and piney.

Taste is sweet, woody, less pine presence than I thought and more fruit presence. Actually kind of good. Booze is present, but not overpowering. I'd place this more happily under barleywine, but it has the hops to qualify as an IPA and the booze to qualify as a quadruple IPA.

The beer starts out clear with an amber-orange body, then a lot of yeast flocculation appears; dense, creamy head. The aroma is limited to caramel and butterscotch. The flavor exudes a heavy malt presence, rich and sweet; strong hop bitterness yet no flavors per se; simmering alcohol notes. Heavy body; densely sweet and warm; boozy.

This can was filled 1/17/2018. That said, their is little to brag about as far as hop smell and flavor goes. It certainly brings about deep, sweet malt flavors and a heavy, boozy feel overall. This is not something to get excited about, yet it has some sort of perverse big beer appeal. Proceed cautiously...

A thick beast of a beer. Poured a dark sunset orange. Lots of sediment was left over after it settled. Orange, pine, and booze hits the nose sharply. Tastes very bitter but at the same time nothing overwhelming. Goes down surprisingly smooth.

= Id still take 120 minute IPA over this but it’s close. A behemoth of a beer that will you leave you clinging to your chair after one.

Mouthfeel – Astringent, very thick and viscous, coats the tongue. Almost like a barleywine.

120 is better, but it's close. Only caveat being a bit to boozy, but still a very good double IPA. Excellent beer altogether. Smooth and nice, very drinkable.