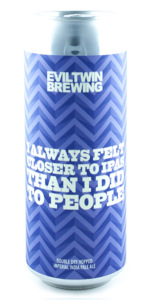 Notes: DDH 9% IIPA is by far the most hopped beer we have ever done. 5.6 lbs/bbl of mostly Galaxy and Citra with a touch of Amarillo and Simcoe.
View: Beers
Reviews: 34 | Ratings: 118 | Log in to view all ratings and sort
Reviews by Tennisballa07:

Light yellow, hazy color. Pineapple on the front and minimal bitterness. No malt, but is it even necessary?

Evil Twin Brewing "I Always Felt Closer To IPAs Than I Did To People"
16 fl. oz. can

Look: Hazy golden body beneath a bright white head that holds quite well and leaves some nice lacing behind.

Overall: Quite charming and highly drinkable.

As New Evil Twin Beer Sunday (Week 692) CANtiniues, I am delving into IPAs after a short departure.

From the CAN: "Yes it's double-dry hopped with tons of tasty Galaxy, Citra, Simcoe and Falconer's Flight. Better be ready for this close to perfect India Pale Ale."

I Crack!ed open the vent & began a slow, gentle Glug into the awaiting glass, holding my breath in bated CANticipation. Why? I got burned by two CANsecutive hazebro AIPAs that were not clearly marked on the CAN as being such. Grr. It puffed up beautifully, creating just over a finger of dense, fluffy, bone-white head with good retention, leaving loads of lacing in its wake. Color was Yellow-Gold (SRM = 4 -5) with NE-quality clarity & the kitchen door banged open as The Gelt Gang of Mammon, Midas & Croesus arrived for a long-awaited taste. Nose was marvelous - loads of sticky pine resin, fresh-squeezed grapefruit, orange peel, and Simcoe the Kitty peeking her catty nose out from where she was doing her thing! OMFG! I CAN remember someone scoffing that this type of DIPA was becoming old hat. Well, if the NE IPA is the alternative, then I will stick with this. Mouthfeel was medium, a little thin for this style. The taste was like chest CANpressions were being performed on yours truly! I sat bolt upright, having been revived & brought back to life. All of my old friends were in attendance, ranging from a woody pine tar mintiness to the bold citrusiness of oranges & grapefruits to Simcoe and her naughty cattiness as well as a slight pineapple sweetness. 8=O I would definitely prefer this over a LOT of people! Finish was dry and bitter, but just the way that I like it. Bitterness is a hallmark of the style & this left turn into the insanity of NE IPAs is utter barking madness.

Casting a spell on the senses with a blend of Citra, Galaxy, Amarillo and Simcoe hops, Evil Twin comes at us hopheads with an imperial IPA that's double dry hopped and employing the techniques of New England IPA makers for a session that's better with alone time than with people.

I Always Felt Closer To IPAs Than I Did To People might be a long name but it leaves an even longer impression on the mind as the ale opens with a perfumy blend of citrus, tropical and herbal fragrances. Beyond its strong haze and deep golden color, the frothy ale leads into a creamy flavor of honey, cashew and spongecake.

But then the hops simply blossom on the middle palate, especially as the malt sweetness begins to lessen its grip. Juicy favors of mango, pineapple, papaya and passionfruit pull from the tropical fruit flavors that lead the way. But a backdrop of citrus brings a decidedly orange flavor with pink grapefruit, lemon and lime adding a touch of citrusy zest. Cantaloup and a hint of peaches rise before the ale beings to favor hop bitterness with its fresh taste of pine shavings, grass clippings and a subtle suggestion of geranium.

Medium bodied and smooth in its finish, the long winded IPA drinks more crisp, clean and refreshing than is usual for imperial status ale. A creamy underpinning keeps the bitterness supported and balanced deep into a medium long after palate of tropical fruit peel and a pep of hemp.

A: Poured from the can into a Piraat tulip/snifter-type glass. Body is slightly-hazed golden yellow with a small white head on top. Small splotches of lace.

S: Not a big fan of the nose - chives and garlic come to mind readily, over a touch of tropical fruit and earthy hops.

T: First impression: surprised by the sweetness. There's a big DIPA malt foundation of honey and sweet caramel malt. It's followed by sweeter tropical fruit (papaya, mango) and a touch of ripe oranges. Finishes with notable booziness, and lingering sweetness on the palate.

M: A bit slick and syrupy in feel; medium-to-heavy in heft.

O: Meh. Was expecting better. It's good, but compared to some (similarly high-priced) beers I've had lately, this one comes up short.

This is an excellent AIPA for several reasons: it is unique and over the top; it is truly beautiful in the glass; and it is very good at disguising the alcohol.

It pours to a gorgeous bright yellow with perfect head and lacing. The aroma is a first rate funkiness from hops and who knows what going bad (ass). The taste is somewhat subdued - subtle and light (almost, but not really). There is no boozy aftertaste or heaviness or malty overtone. Truly a nice, pleasant, not-too-hard-to-drink treat.

Poured a slightly cloudy orange-gold body with frothy head. Floral, earthy, light tropical fruit aroma with a touch of dankness. A little bit of tropical fruit sweetness that is balanced with an earthy juiciness. Beer is slick and easy drinking (could be described as oily) while maintaining a bitter, orange-like acidity with clean, dry finish.

A: Pours a murky medium to dark golden burnt orange in color with moderate amounts of active visible carbonation rising along the edges of the glass and moderate apricot + honey + dark golden yellow colored highlights. The beer has a two finger tall sudsy foamy light beige head that slowly reduces to a couple of small patches of medium thick film surrounded by a large patch of thin film covering the remainder of the surface of the beer and a medium thick ring at the edges of the glass. Slightly heavier than moderate amounts of lacing are observed.

T: Upfront there is a light to moderate flavor of biscuit + caramel malts with a just shy of moderate amount of caramel sweetness. That is followed by strong flavors of juicy tropical/mango, tropical/papaya, citrus/grapefruit pith, tropical/pineapple, and citrus/orange hops which impart a light amount of bitterness which fades away pretty quickly leaving a lingering juicy hop sweetness.

M: Slightly heavier than medium bodied with moderate amounts of carbonation. Hints of crispness upfront with a moderate amount of dryness in the finish.

O: Drinks very easily considering the strength, the alcohol is well hidden and there are some really great tropical + citrus hops flavors/aromas. Very enjoyable and I would be glad to get it again.

so, uh......this beer is ridiculously good. The look is good, the smell is a little dank, the taste is just heavenly. It's simply too bad this will likely be a one off!

the look? It looks like beer. It's got a purty beer look about it. It has nice lacing too! I would drink this all day long!

The feel? It's very soft. Velvety soft. It has just the right thickness to cover every last micrometer of a tastebud's sensory surface. It feels full, and ripe, and right. I think you know what I mean. This beer is fertile, it feels so good! I would love to feel this beer (or fertile people) all night long!

Overall, are you kidding me? It will be a travesty if this beer is never brewed again. I'm half way through my allotment and I'm already lamenting, mourning the loss. This beer is phenomenal.

and the name? Could there ever be a more perfect name for a beer? I won't go so far as to say I'd trade this beer for relations with real people all night long but it's close. Do you hear that people? Step up!

Reading the other reviews make me think for sure this batch I am having today on draft is a completely different beer. For example, it is so hazy it looks like some blend of milk and beer. Smell is IPA, Simcoe sneaks the odd note in. Very smooth mouthfeel but almost an oily vegetables taste to the hops. Very interesting beer, this iteration on draft is very different from what has come before in cans.

On tap at The Lark, it pours hazy gold color with 1-2 finger foamy off white head that faded slowly and left good foamy lacing with rings as it went down.

Overall it’s a very good DIPA, but a little big of a letdown flavor wise for an Evil Twin product.

1 PINT can
Served in an IPA glass

This beer pours a hazy, golden color and is topped with a few inches of fluffy, beige head that leaves decent lacing.

The aroma is tropical fruit, melon, and pear.

The taste is tropical fruit with some pear and a medicinal taste.

It is pretty good, but there is just something about it that doesn't sit right with my untutored palate.

Bought the can at Kihoskh in Copenhagen. It was priced by a madman, and bought by another one. Price was 68 Danish Kronor, which translates to just over 10 dollars. The important question, though is if it's worth it. Let's see.

It pours a murky orange, with some floaties. Not a lot of foam.

The smell is very juicy and tropical, a bit sweet upfront. Lots of mango and a slight hint of vanilla. Swirling it releases some notes of orange peel.

First sip is massively boozy. Warms the mouth and chest as it goes down. When the initial booze lifts you get some juicyness, along with plenty of citrus peel and a bit of pine. Bitterness is well integrated, but more pithy than hoppy.
As it warms, it gets a bit fruitier and slightly grassy. The booze, however, prevents anything else from really shining.

Mouthfeel is soft and pillowy, maybe a little bit undercarbonated.

So, was it worth 10 bucks? Not really, no. It's good, but the booze just blankets my tongue and kind of numbs it. Glad to have tried it, but would not pay that price again.