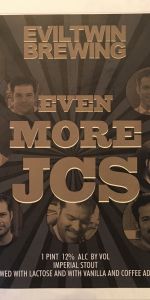 Notes: Imperial stout brewed with lactose and with vanilla and coffee added

A few times in the history of craft beer it has happened that a highly praised beer maker rises beyond mortal stardom into a higher godly league. Usually the recipe to become such a divine hero you need crazy juice skills, a fake Minnesota dialect and a cool and exotic sounding name like Jean-Claude - it's even more JCs - an affogato style imperial stout.

Dark black color, true black not the normal brown colors you get with lighter stouts. One of the most dense and creamy heads I've ever seen and lacing for days.

Overall the beer is what was advertised. The highlight is the insanely creamy mouth feel. There's also a nice aged somewhat sherry like note I get that really puts this one together.

Holy Christ on a cracker- the Evil Twin team does it again! Their famous (or infamous) Even More Jesus catches the ire of Italy and turning their 30-weight imperial stout and turning it into a twelve percent affogato-styled coffee and cream elixir.

It's dense pour rather layers itself into the glass while a rich and chocolaty meringue floats laboriously above. Much work creates a mocha whipped scent that saturates the nose with all things espresso, cocoa, walnut and booze. To taste, its the sultry sweetness of blackstrap molasses, brown sugar and scorched marshmallow that frame the beer's early palate.

And then the ale rolls along the middle palate and unleashes a breadth of flavor. Much of the sweetness holds its line, while the finesse of caramel and toffee fade away. What emerges from the void is a strong Italian coffee presence that's bolder than french press earthiness but shy of total espresso. As the spice of vanilla and the milkiness of cream calm the senses, the culmination of taste registers highly with a barbaric alcohol tone but a soothing and mature final taste.

Beautifully put together, this Even More variant exacerbates the best of what the beer does anyway- the roasty, toastsy and smoky counterparts. But its strong java influence amplifies the roast while the soothing spices bring it back down. This is a remarkable stout that's among Evil Twin's finest ales.

Who doesn't love New Beer Sunday? How CAN you not enjoy a CANportunity to really do some damage under the auspices of doing something New? Happy Even More Even More Evil Twin Sunday (Week 678) as I delve even deeper into this madness!

From the CAN: "Imperial stout brewed with lactose and with vanilla and coffee added"; "A few times in the history of craft beer it has happened that a highly praised beer maker rises beyond mortal stardom into a higher godly league. Usually the recipe to become such a divine hero you need crazy juice skills, a fake Minnesota dialect and a cool and exotic sounding name like Jean-Claude - it's even more JCs - an affogato style imperial stout."

Wotta buncha eVeN MorE S**t!! I don't gIVe a fiG whether or not YoU Are fROm DeNMark, USE the CORRECT FONT, ARSEWIPE! i'm not changing this to read: "even more JCs" because it makes even less sense than the price that I paid for this CAN, you silly, pretentious F**K! Feel me? No? Tough! Up yer JCs.

This was a spendy CAN & I was not impressed that not only does it not appear on their website, but the font of the label does not match their verbiage. Rubbish!

Moving on, it began with a Crack! which released a spritz over my fingers, followed by an inverted Glug to alleviate my furious anger with great vengeance. Strike like Jules, I say! It then puffed up to form a finger of dense, foamy, rocky, dark-brown head with great retention, leaving great lacing in its wake. Color was Black/Opaque (SRM = 44), allowing ZERO light penetration. Nose was not only redolent with coffee, but it smelled like espresso! Man, I like my coffee like my magic & women - hot & black, but this was smoky! Mouthfeel was medium-to-full, not as creamy as its predecessors. Even so, I allowed it to roll around on my tongue to get a sense of what it was all about. It was much sweeter than the nose had led me to expect with more of a mocha milkshake quality to it, featuring a vanilla sweetness. I prefer my coffee unadulterated and so this was not what I would normally imbibe. That said, it was not out of spec for the style & so, I will rate accordingly. CAN't dun a beer for being what it purports to be, or at least, I shouldn't. The sweetness just struck me as being a bit cloying after its previous dry brethren & the unabating nature of the sweetness did nothing to endear me to it. Finish remained quite sweet, like café con leche, but it was not worth what I paid for this CAN. You & they CAN have it! Bah!

Poured from a 16 oz. can into a chalice.

Appearance: Pours midnight black. Moderate amount of bubbles and a solid finger of tan head that settles into a thin creamy layer.

Mouthfeel: Full bodied with a moderate amount of carbonation. Rich, creamy, and slick.

Overall: A great variant on a great stout. Big chocolate and coffee flavor with some nice vanilla and lactose sweetness.

Served in a snifter glass from the can.

Smell: cold the beer is somewhat light but as soon as it warms up it kicks up a notch. Molasses and hints of coffee but not strong, subtle enough.

Taste: Complex sweet and almost bitter with coffee and cream with a special type of mocha. Brown sugar and a sweetness of molasses.

Mouth: Medium carbonation at best but very full bodied. Sticky with after taste of caramel.

Overall: Awesome pickup but I had to take a lactose pill but I was fearful of the after effects. Grab it if you are ever lucky to see it. Salud!

Sweet, for sure, but bold & interesting. I'd have another...

Imperial stout brewed with lactose and with vanilla beans and coffee added. Poured from a pint can into a Bruery snifter. The pour is extremely dark and boasts a massive mocha-brown head with outstanding retention. On the nose I get dark roasted malt, coffee, cocoa, and a little cedar.

Full body with a creamy feel and a rich flavor. The first thing to greet your palate are flavors of espresso, toffee, and pound cake. As the flavors develop, more roast comes forward and it seems there are always new sweet flavors rising up to meet them. Around mid-palate, the vanilla beans make their contribution, turning the malt and roast to sarsaparilla and molasses and a hint of cinnamon. There is a little lingering roast on the finish.

Very rich and flavorful. Not the most drinkable stout, as the rich flavors tend a bit too much towards sweet and cloying and shock the palate a bit. I like the original Jesus beer much better than this one.

Pours a jet black color. The head is two fingers high and tan in shade. Fluffy and thick in texture, it has excellent duration for a 12% stout. Plenty of lacing sticks to the glass. This is a aesthetic perfection for a beer, plain and simple - in fact, this is art.

For the record, I personally believe the base beer smells excellent. Black coffee adds a subtle but palpable element to the to the roasty, savory aroma. Notes of graham cracker, vanilla, and cream float around in the background. This does not go overboard with the vanilla. This also accomplishes what I wanted - an already great stout is taken to the next levels with the additions.

Vanilla flavors are more assertive than the nose suggested. Although it starts with the slightest twinge of coffee bitterness, waves of vanilla, cream, and graham cracker wash over the palate. Apart from flickers near the start and finish, black coffee fails to properly show up. And honestly, the base feels overwhelmed by the mass of vanilla flavor. It's still solid, but it's too one note and sweet to be great.

This is dense and chewy in texture, everything a big stout should be. Though it's slightly sweet, it feels wonderfully decadent going down. Carbonation is low.

This is an impressive dessert stout, make no mistake. But for me, it's just too sweet. The original version is more balanced and easygoing(ish...) for me. I'd drink this again either way.

Is luscious chocolate oil stout somethin just makes the booze ooze. Boozy oozy juicy... um... is there a story behind this? Is it the evil twin making fun of Mikkelle? Maybe

16 oz can collected at Whole Foods in Brooklyn NY, split 2 ways ... served in my Evil Twin balloon glass. Pours an oil thick black with fine thin brown head. Aroma is a vanilla caramel chocolate bomb with some clear sense of the booze in the glass. Taste starts sweet - vanilla, chocolate, hints of sweetened coffee, caramel - definite booziness retronasal - cookie dough.
Thick smooth mouthfeel with no bitterness - a touch of booziness on full body. Great - though 4-6 oz may hit the sweet spot on this decadent stout.

The mouthfeel is too thin, but the flavor combination is great and the alcohol is hidden very well. Not the best variant I've had of EMJ, but recommended