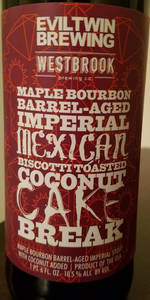 T - Taste is similar to the nose with nice slightly warm booze and tons of spicy cinnamon. Huge chocolate notes, Mexican hot chocolate, almond paste, cookies, big fudgy brownie. The knocks are that the maple barrel is super subtle with the alcohol drinking rather harshly.

M - Mouthfeel is lightly carbonated, creamy, thick, but the alcohol is really noticeable.

O - Overall this was a solid enough stout, the biggest issue here being how boozy it comes across. The chocolate and biscotti notes are really pleasant as is the cinnamon.

Big thanks to rudzud
Pours a decent but smaller fizzy head with lower retention and no lacing, decent legs, pitch black thick beer

Might be the longest beer name I have ever seen. The grand question: is it too much to really enjoy? Let's discuss. Pitch black appearance, mocha foam. On the nose you do get a decent bit from the maple bourbon barrel, with toasted coconut, chocolate fondue, peppers, and vanilla, but there is a lot there, fun to take in but a lot of work. Taste is clearer and more complex, add the biscotti, candi sugar, wood, brown sugar, and sweet malts to the mix. Feel is pretty sweet, chewy, but not really that heavy, finishes boozy and spicy. So to answer our question, yes it is quite enjoyable, though a lot of the subtle flavors do get trampled a little bit. Letting it warm up helps a lot! Still I thought the original collab was more streamlined while being quite complex

A: Poured into a snifter to a black beer topped by a quarter inch of rocky dark tan head which fades quickly to a collar around the edge of the glass with minimal lacing
S: Smells of coffee, vanilla, cinnamon, chili peppers, light maple, and some slight coconut with a little oak.
T: Taste is maple, coffee, chocolate, cinnamon, coconut, vanilla, light caramel, and some slight chili heat that builds over time. On the swallow this one is sweet vanilla, cinnamon, more chili pepper heat, coconuts, maple, and some slight oak with a little charred wood.
M: This beer is full in body with a silky feel on the palate. Carbonation is effervescent but the beer is not prickly. The beer does have a slightly drying finish which is nice.
O: Overall this beer rocks the house. It has great flavors and an unreal amount of complexity. It's pretty sweet but the heat helps to provide a little bit of balance. Well worth a try despite the high price tag.

Thick black beer with a quickly fading brown head that has a slight reddish tint to it. Smells pretty heavy on the booze and bourbon but there is chocolate, coconut, maple and vanilla. Tastes amazing. All the things on the label show up. Sweet with lots of coconut bourbon and maple. Nice burn at the end. Delicious.

L: Pours viscous black. No cap formation but does created thin tan ring around perimeter of glass. Moderate lacing on the glass.
S: Bourbon, chocolate, and pepper heat coming off on the nose. Smells enticing. Sweet chocolate in smell with bourbon bite and pepper heat. No coconut or maple on the smell though, at least not in the amounts of the afore mentioned ingredients.
T: Upfront with coconut and chocolate, but it is quickly overrun by the pepper spice/warmth. Bourbon is definitely present and very noticeable on the finish. Slight burn as it goes down. Residual pepper heat resides in after flavor, but so does the coconut. As it warms, the maple comes out a little more, adding a nice addition to the flavor profile. It is sweet, hot, spicy, and bourbon-forward.
F: Medium in body and in weight. Not motor oil like in feel or consistency but has a nice weight and appropriate carbonation.
O: Very enjoyable. In some aspects, its a hot mess of a beer seemingly throwing all these flavors at you. But in the end, I am really enjoying it. I will say, the pepper and bourbon heat is strong, but the coconut, maple and sweet chocolate flavors do a good job at balancing it to some degree. I am very glad to have tried. Cheers!

Poured into a snifter. Viscous dark brown on the pour, with a small dark tan head. Aroma showed subtle toasted coconut, maple, chocolate, and faint spice. Everything on the crazy label is there on the taste: sweet maple, toasted coconut, rich chocolate notes, subtle bourbon, and finally a building spice on the finish. The heat seems on par with the last Mexican Cake I had, and it balances out the maple nicely.

22 oz bomber into a Founders snifter.

Pours a dark, dark brown pushing the limits of ink black. Even with a rigorous pour down the center a minimal frothy mocha head lingered only momentarily. Some floaters even in the darkness of the beer.

Maple dominates the aroma, followed by sweet molasses, coconut, caramel and the pepper burn on the end.

First initial sip yields a massive sweetness from the maple and molasses notes. Midway a nice toasted coconut, roasted malt, bourbon and oak vanilla barrel. The spice comes on the finish with some decent heat and a bit of bakers chocolate bitterness. Bourbon bite.

Full bodied stout, very sweet but the other ingredients keep it from being cloying somehow. Heat and bitterness finish off each sip.

Massive stout, especially at $20 a bottle. But one of the better stouts I’ve enjoyed lately. I may pick up one more bottle. Definitely worth a try.

Set out to soothe the sweet tooth in every beer lover coast to coast, Evil Twin Brewing teams up once again with Westbrook Brewing for an imperial stout that combines the luscious flavors of maple, bourbon, oak, biscotti, coconut, vanilla, cream and chocolate, and with the patience of barrel aging for extra measure.

Very dark brown and a shade off of black, the beer's creamy and inky visual textures release a low lying sepia stained froth. Preferring legging over lacing, the stout swirls with a decadent aromatic blend of those promised chocolate, coffee, coconut, whisky and caramel along with strong suggestions of sherry, port and char. Sweetness coats the tongue with the lush maltiness of molasses, caramel, chocolate and sweet cream for a sultry introduction to taste.

As the stout unfolds on the middle palate, its sweetness shows no sign of backing down. Coconut and coffee rise to the top while the nuances of oak, vanilla, starch and toast simmer underneath. Honey and caramel meet the molasses, coffee nnd cocoa for a robust sweetness that develops into a slimly bitter finish with those spicy notes of oak aged whisky, soft tannins and fortified wine tartness bringing a spicy but fruity edge with plum, red grape, date and cherry to the late palate.

Savory and strong, a single sip of the full bodied stout goes a long way, coating the mouth in nearly cloying decadence. A long aftertaste of madeira and bourbon drags echoes of coconut and vanilla along with them as the chocolate and molasses starts to dissipate.

L: Had this beer on-tap at Westbrook, poured into a snifter glass. Had a dark brown / black color and a thick, opaque consistency. There was a quarter inch of foamy, tan-colored head that lasted an average amount of time. OK lacing.

T: Tasted of a bit of coffee (less than expected), a good amount of malt (mostly in the finish), lots of chili peppers, a big shot of chocolate, some maple syrup, a lot of bourbon, and some coconut. A big, aggressive, and complex flavor. The peppers hit you with blast of heat, but the chocolate softens things up. Very tasty.

F: A solid amount of carbonation with a sharp, hot finish. Full-bodied.

This one pours a very dark black color, with a small head, and not much lacing. There's floaties galore in here- probably coconut?

There's quite a lot going on here, and it all mostly works. It's quite sweet, but doesn't really become taxing. There's not a ton of barrel character, but the maple imparted from that process does taste really good. There's a lot of creamy sweet coconut here, with marshmallow fluff, candy syrup, and a surprisingly potent pepper heat on the finish- I remember the base "blend" of Mexican Cake and Biscotti Break not being all that spicy.

This is medium bodied, silky and super drinkable, with a good level of carbonation.

There is no way that this is worth the price that it fetches. Nonetheless, it's a fantastic stout.

2018 bottle Apparently limited availability. One for now and one for later... Lots of coconut with excellent residual heat. Dark chocolate not overly sweet.