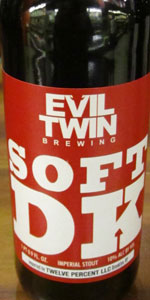 Pours a pitch black with minimal head and little effervescence. Smell is a muted roasted malts, smoke, leather, some dark fruit. Taste is sweet malts forward, transition to smoke, leather, espresso and a metallic twang that is a bit off putting. Improves as it warms- body is a bit thin for the style- finish is clean.
Overall- this is a good rip- and well hidden- profile not complex and the smoky, metallic notes are a detraction- I prefer their other stouts- not my favorite and I wouldn't purchase again- though I wouldn't turn it down if offered at a party or on tap

apparently inspired by a soiled diaper, the label claims banana and vanilla and chocolate and all kinds of stuff, but this is pretty bogus, and one of those beers that for me sort of ends the mikkeller vs evil twin debate, if there even still was one, dont get me wrong, a very good stout, but its less than half as interesting as the label claims it to be. one thing i like a lot about it is its lightness. you get all the dense coffee roast flavor of the dark barley, but you dont end up with all the viscosity that bog these down. the alcohol is impressively well disguised, this drinks dangerously quickly for what it is, thats for sure, and thats one of its best features. there is also a cool nuttiness to the flavor, roasting chestnuts or something, almond flour, its very earthy in there with the coffee notes. its not as sweet as suggested either, which i like. maybe some dried fruit, dates or plums or something, but no banana on my palate at all. maybe a trickle of vanilla too, but very mild in that regard. i like all of the stout, the yins, the christmas eves, the i love you with mys, and on and on, but they really in some ways arent all that different from one another. i see the appeal in this one, but taken in the context of all of his stouts, it certainly doesnt stand out for me. these beers (in some ways because of their price), are judged to a higher standard than most, and frankly this doesnt get the job done for me, as good as it is in terms of overall quality. nothing distinct to revisit here, but thats just me.

Look: Typical ET stout. Pitch brown body. Darker than usual thick foamy head that quickly retreats to a think film and halo around the glass.
Smell: Medium roast coffee, sweetness, a little lactose, maybe some chocolate, and a touch of char.
Taste: The taste is very similar to the nose.
Feel: Sufficient. It works well with all of the other elements.

Overall - Not bad. I would have it again, especially at the current price point. All of these breweries trying to top out their prices are killing my bank account. This one isn't like that, and I don't think it will be.

Poured in a sinfter at Pizzeria Paradiso in Georgetown.
Opaque black with brown highlights, adequate head with good lacing.
Smell is ok, sweet.
Initial taste is pleasantly roasty sweet, licorice, chocolate; aftertaste is clean, just enough hop sharpness. Balance and complexity of flavors is unusual.
This was my desert, so I am more than pleased.
A drinkable Imperial Stout is an oxymoron, this is to be sipped, slowly.

Nose is dark roasted coffee, roast malts, some dark chocolate and just a hint of vanilla. Taste is spectacular. Evil Twin's stouts have consistently satisfied me. My least favorite has been their Yin Imperial Stout and it was a good one. There is vanilla right out front with heavy, roasted notes and some coffee coming up in the back. There's a slight strand of chocolate running through but the vanilla and roasted malts are strongest. The coffee flavors sticks around on the tongue afterwards paired with some hints of vanilla. It says "Best by 2015" on the bottle so I may put one away to try in a year or so. God I love Evil Twin.

EDIT: After reading some other reviews I can also pick up a bit of smokiness like Stone's Smoked Porter. Its really mellow though, and it comes across as roasted malts. There is definitely a smokiness there though, especially in the aftertaste.

Appearance: thick syrup, jet black, rich and menacing with a thick brown head that rode the glass down.

Wow! Rich and decadent. I must have more of this in my cellar.

Dark black throughout, no clarity, thick, viscous, heavy, and substantial looking. Gorgeous. This leaves a bit of sticky web-like lace down the glass.

Rich aroma of dark chocolate, roast, a bit of cream, earthy vanilla, and a hint of anise. Complete.

Medium to full bodied with low to moderate carbonation.

This was incredibly tasty, and surprisingly so. Easily, the best Evil Twin beer I've had to date.

Pitch black with a small tan head. Some lacing.

Massively sweet with so much chocolate flavour it isn't funny. Great vanilla notes too. Really smooth and very easy to drink.

An awesome beer in my view. The sweet, chocoalte, vanilla flavour is fantastic and really works well here.