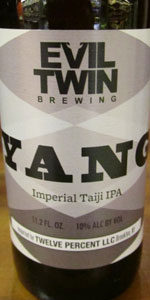 Notes:
View: Beers
Reviews: 177 | Ratings: 901 | Log in to view all ratings and sort
Reviews by woodychandler:

I am rather inCANredulous at how many CANs of Evil Twin Brewing's beer I have acCANumulated for inclusion in The CANQuest (tm)! I had begun running through them at the end of New Beer Sunday (Week 677) & CANtinued my efforts yesterday during NBS (Week 678) so now I am simply finishing up. I have a couple/few days' worth left, but since my 53rd birthday is next Sunday (Week 679) & I have plans that may curtail my involvement that day, I am getting them in while I CAN.

From the CAN: "This is one half of a Black and Tan drink. Not just any Black and Tan but the one where a toasted smug and hoppy fella get together to make a sublime Taiji style balance. Mix the Yin & Yang together (or enjoy this profoundly evil Imperial Stout solo)."

I am sticking with each one solo, especailly since it now seems that Yin & Yang exists as a separate beer. I would prefer to allow the brewery to mix the version that they envision.

I realized upon CANducting the Crack! that it was a brimful craft CAN since I got a spritz across my fingers, followed by some foaming through the vent. I then CANmenced a slow, gentle Glug into the awaiting glass. Unbidden, it formed just under two fingers of dense, foamy, tawny head with good retention that left nice lacing in its wake. Color was Amber to Deep Amber/Light Copper (SRM = > 9, < 13) with NE-quality clarity. Nose was Evil with a pungent pine dankness and wafting alcohol fumes to tickle my sinuses! OMFG, if I needed any reminder to go slow with this one after last night's Yin, this provided it. Mouthfeel was big, full & thick, like a dollop scooped onto my tongue where it instantly went to work, burning & jackhammering at the old, weak taste buds that were no match for its intensity. While this onslaught was happening, my sinuses filled with an unrelenting pine resin & dankness that seemed to spontaneously CANbust, burning my nose hairs & making my eyes sweat. Following that, my heart decided to begin beating unCANtrollably, as though it wanted to jump out of my chest & run off. Phew! And that was just the first sip ... What blend of Yin & Yang would be suitable for human CANsumption?!? I am VERY curious to try theirs as a result. In solemn CANtemplation, I licked my lips & really set off another wave of unrelenting pine. 8=O This ain't for real! Even as a self-avowed, self-described hophead, I began to do the Scooby Doo & shake & shiver. Phew. Okay, I was NOT expecting this! As a general euphoria slowly overtook me, followed by a nice mellowness, I took my time with the remainder of the CAN. Finish was CANtinued hot & dry, but just soooo gooood! I am soooo tired of tropical hops AIPAs & don't even get me started on NEIPAs. This CAN of pine resin was just what the doctor ordered. Or maybe he ordered me to come in because of it. I CAN never keep this stuff straight.

4.0 S: This is a BW type DIPA. Big floral hop aroma right from the start. Citrusy orange, mango, pineapple, and grapefruit too. Layers of caramel sweetness on the malt side. Hints of toffee as well. Can't complain, it smells great.

Pours amber with a creamy head.
Nose shows heavy clean malt, pine, resinous hops and some lychee. Massive malt hit too.
Very aggressive flavours, full of pine and grapefruit with a high, sharp, biting bitterness. Some booze too along with some malt that doesn't match the bitterness.
Could use more carbonation.

It is a very, very tasty beer. Alcohol is well covered so be careful with that one. Missing some IBU in my opinion. I love malty characters of imperial IPA's, but in this case some more bitterness would be welcomed.