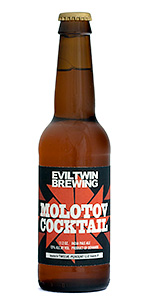 Notes: Did you like Before, During, & After Christmas? Maybe you thought it poured brilliantly, and you loved of the arrogant amounts of hops wowed you. This beer will knock your tongue off, essentially due to the obscene amount of hops that went down this explosive fella. It’s a tour de force in hoppiness and by far the craziest beer made by Evil Twin… but not the last.

I am rather inCANredulous at how many CANs of Evil Twin Brewing's beer I have acCANumulated for inclusion in The CANQuest (tm)! I had begun running through them at the end of New Beer Sunday (Week 677) & CANtinued my efforts yesterday during NBS (Week 678) so now I am simply finishing up. I have a couple/few days' worth left, but since my 53rd birthday is next Sunday (Week 679) & I have plans that may curtail my involvement that day, I am getting them in while I CAN. This is IT! The last of my backlog that has taken me two Sundays and several days with which to get caught up. CANd by!

Hey, Keith Morris & Greg Hetson, Give me a bomb/A Molotov/It's a coup d'état! Wow, Bro. Woody, that's pretty Evil, man! Would you settle for a Cocktail, instead? Don't be Circle Jerks! I remember when I used to like yinz guys!

From the CAN: "Despite the crudeness it is tricky to make an effective Molotov cocktail. Despite the unruly nature of the rebel it is very tricky to resist accepted conventions. Molotov Cocktail is a tour de force in hoppiness. It's a spark for action and by far one of the most anti-authoritative beers ever made by Evil Twin Brewing."

I Crack!ed the CAN open & inserted my homemade cloth wick just before I lit it aflame & heaved everything through the plate glass window of ... Whoops! A bit of a flashback, there. Let's reboot.

I Crack!ed open the CAN CANmenced a slow, gentle Glug of this explosive brew into my awaiting glass. An in-glass swirl raised a finger of dense, foamy, rocky, tawny head with good retention that left behind some nice lacing. Color was Amber (SRM = > 7, < 9) with NE-quality clarity. Nose smelled like orange marmalade on toast soaked in alcohol. 8=O OMFG! If my sinuses were finally starting to clear following Yang, this went straight into them like a battering ram charging an already-blown gate. It burned out whatever nose hairs might have been remaining & I say that only because I could see some sort of CANflagration emanating from my nostrils. I was not getting mango on the nose, but is that really a problem? Mouthfeel was medium-to-full, not as big as Yang, but still attention-getting. The taste remained very orange-forward initially, underlain with a toasty, biscuity maltiness. I CANnot say if it was because I preceded it with a CAN of Yang, but it did not have the overall intensity of that beer. Warming, I began to get the mango sweetness more strongly, but it was still orange's game. This did not have the fusel alcohol heat that really blew me away in Yang & that was a definitel plus. Back-to-back of that nature could have been killer. Orange-mango preserves on toast, that's my take on this monster. Dry as the zephyr winds blowing across the Sahara Desert, but not overly hot. Scarily drinkable, actually. Phew! Time to go operate some heavy equipment. That, or get involved in some recycling - see the original opening. A bottle might work better for the bomb after the beer, but I CAN only wonder how gasoline in a CAN would work instead. YMMV, definitely!

Picked up a single 12 oz. bottle of this to try on a recent trip to Kentucky and south western Ohio. Poured into one of my tulip glasses, this beer pours a somewhat cloudy/hazy medium copper amber color with some streams of bubbles rising to the surface of the beer and a lot of yeasty chunks floating around in the beer. Has a white head that is about 1/2 of an inch thick when first poured before settling to a medium sized ring lining the inside of the glass along with a nice big cluster of foam on the beer's surface and pretty decent lacing. Aromas of citrus, herbal, resinous, piney hops and alcohol rounded out with some subtle maltyness. Has a fairly sweet, slightly toasted, biscuity, caramel malt sweetness upfront that gives way to big piney, resinous, herbal, and somewhat grapefruit-esque hop flavors. Rounded out with some dried fruit notes such as figs, apricots, and perhaps a bit of plum. Lots of booze too. The sweetness here booziness certainly dominate here. I wonder how long this beer was sitting on the shelf at The Party Source before I purchased it. To me this drinks more like a good barley wine than a double IPA, and I can't find any indicator on the bottle of when this batch was bottled. It is very tasty nonetheless, just not very bitter. Has a somewhat crisp, frothy and creamy, slightly prickly, somewhat chewy and oily, medium to full bodied mouthfeel with moderate carbonation. Surprisingly easy to drink. A damn fine beer indeed!

Bought s bottle at the Beer Shop in East Longmeadow. Beer pours with a medium head that dissipated into a thin ring around the glass. Relatively clear with a burnt orange-yellow appearance. Warm and thick aromas of spiced hops, alcohol, pine, sharp citrus, and even some dark fruit like plums or raisins. Taste follows the nose with a sharp tart aftertaste. Mouthfeel is good and helps to give the beer a crispness with a warming alcohol body. Overall, really enjoyed this boozy imperial IPA.

A well balanced IPA. I liked it very well. I am a sucker for heavy alcohol brews and this one fits the bill.

L - Not sure what some of the other reviews are talking about. Poured a very light and hazy copper, practically blonde. Huge head that dissipated nicely, tons of floaters and suspended particles.

T - Heavy with hops right off the bat but not too bitter! Lots of apricots and a bit of grapefruit. Finishes slightly bitter but balanced, with a hint of what can only be described as leafy vegetable (I know, strange, but its good).

F - Medium bodied, not very carbonated. kind of slippery feeling on the tongue, but not bad at all.

O - Pretty good! Will definitely drink again. Really surprised at how well it hid the alcohol and at how balanced it was, and it's still sort of refreshing! The ABV is definitely there though, a couple of these will do you well. Definitely recommended!

12 oz. bottle, with bottled on date 04/18/2014 printed on the bottleneck. Another new big beer to me from Evil Twin, this one a 13.00% abv DIPA. The label calls this beer one of the craziest beers made by Evil Twin, so we'll see what that's all about.

A - It pours a bright murky golden orange colored body with one finger of frothy off-white head. Big chunks of sediment floating in the glass. Noticeable carbonation rushing topside from the etching at the bottom of the glass. Yeah, I'd say this one looks pretty damn nice. 4

S - The aroma is, as expected, a big bitter hop bomb - piney, orange marmalade, horseradish, herbal / tea leafy, with a good dose of sweetened caramel malt in there also. 3.5

M - The feel is smooth and clean, especially for such a high abv beer. Not as ridiculously bitter and dry on the finish as I'd anticipated. Sticky, sugary, and malty. Lower carbonation than usual. Easy to drink for the 13.00% abv.

Overall, a nice strong DIPA from Evil Twin. Not the greatest that I've had, but it has enough going on to keep things interesting. Recommended.

Pours an orangey peach with a one inch head that surprisingly dissipated without lace. Nose is candied orange with a little malt and pine, but was muted for such a big beer. Taste is...omg that's too sweet. The candied orange from the nose comes through, and there is a good bitterness to stand up against a significant malt bill here. However, there is no way around the fact that this beer is just way too sweet. I've had candy bars and lollipops that weren't this sweet. Overall, I'm sorry to say it just doesn't work.

Super boozy. Just not a fan of ipas.

Poured into a large snifter glass. The color was a hazy yellowish orange color. The head was white with a low retention but had some light lacing that actually stuck around for a while. The smell of the beer was not nearly as hoppy as I was expecting it to be. Personally I feel that the nose of this beer gives of more grains than anything else. The taste of the beer is pretty hoppy but not overly impressive on that level. It's got a slight sourness to it that may be coming from the types of hops that were used here. The mouthfeel is oily, lightly carbonated and not very exciting. Overall for the price per bottle this beer is not worth it... Just my personal opinion on that. The beer left me with some severe cotton mouth which was awesome since that is the initial intent of these kind of hop bombs. The 13% is well hidden and the beer is quite drinkable to say the least but still not very exciting.

T/F: Light malts give way to a very juicy and dank hop profile. Lots of tropicals... the mango shows through. Definite citrus and a bit of pineapple. Also some light floral elements. Sharp and bitter... finish is juice... coats the tongue. Sticky and resinous. Warming and almost boozy.

O: A big juicy IPA. Lots of flavor... and the ABV could be a bit better hidden (that 12% sneaks up on you fast). Love the big juicy DIPA's though. Glad I got a 4-pack.

Just not much going on here for me. Try it if you like.