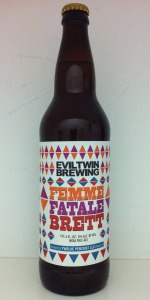 Holding true to the American notion that IPAs should be a showcase for hop character, with varieties that put forth citrusy overtones, Evil Twin's brettanomyces fermented version does all this surprisingly well.

All the brightness of sunny summer mornings that are met with fresh squeezed orange juice is met with the first sip of Femme Fatale. But with a thin substrate of malt, the beer has a creamy starch taste that allows the citrusy hop notes to wallow inside. Light on sweetness, and mild honey-like character rather reinforces the "juicy" character of fruit from American hops. Mild tropical hop notes of pineapple rise as the beer warms and more sweetness emerges. With all this, the earthiness of vine-ripened fruit allows a thin veil of must, perfumy woods, and lime peel bitterness to assist hop flavor in finish. It's a disciplined IPA that boastfully showcases its hop flavor.

Medium bodied to start, but the beer gives lighter impressions as the creamy carbonation digresses and the resinous hop dryness takes hold. But that creamy-dry hop texture on the middle palate is powdery and saturating at the same time. With low astringency and clean bitterness, the beer finishes decidedly dry, warming, and very crisp. The mouthfeel of an IPA doesn't get much better than this.

If citrus is what you want, then citrus is what this beer delivers. Even as the brettanmyces contributes background notes of earth, the hop character found in this beer won't be denied. All of the juicy and vibrant taste translates to the cleanest and most crisp bitterness imaginable. Dry as a bone, this is one masterfully crafted beer from nose to finish.

Poured from a 22 oz bottle into a nonic.

Grainy aroma supplemented by the Nelson Sauvin and Brett funk

Great beer. Drank it with a great burger and the pairing was heaven

Copper and gold with almost no haze but a firm stream of bubbles rising in the middle of the glass. Topped with 2 fingers of yellow hinted head.

Brett on the nose immediately. Horse blanket, dusty cellar reminiscent of Cantillon, light floral quality like daisies after the rain.

Big bitterness I wasn't expecting but great balance. Very funky but refined brew that would be extremely versatile with food. Memories of Duvel one offs and Orval all come to mind as I sip this masterpiece. Got on Wishbeer, drank July 25th, 2016.

Boy this was interesting. Not sure how old it was as there was no bottle dating on it. Initially it was fully brett and not much else. Really dry at first too. But as it warmed and opened up the underlying ale began to show. More malt than hops, that's why I wonder if there was a little age on it. The bitterness of the hops was evident in the bottom, but I drank that separately. While starting harshly it finished as a reasonable drinkable beer.

It had a hoppy nose right up front from the Nelson Sauvign, but finished smooth, especially as it warmed up to room temp.

The aroma is straw malts, Belgian yeast and some tangy tropical fruits and some musty brett.

The flavor is sweet sugary doughy malts with some tangy tropical fruit and light green apple and some earthy Belgian yeast leading to a lightly bitter finish that dries it out some and lingers in the aftertaste. The mouthfeel is medium to full bodied with smooth carbonation.

Overall, a very nice brett beer, but not a lot of hop character other than some bitterness late in the finish.

Grapefruit, tangarines and orange in the nose, with just a hint of the forest floor.

More orange notes on the palate, very dry with near puckering grapefruit notes and hop resins. Brett chacteristics fairly muted. Just picking up some earthyness and perhaps some dusty cellar.

Nicely crafted, super citrusy IPA, brett on the quite subtle side. Roll it all together and its a tasty, citric IPA with a soft and smooth mouthfeel. Highly enjoyable and well worth giving a try.

Appearance: Cloudy beige, not a great head or lacing. King of ugly actually.

Aroma: Big fruity/pickly brett. Tropical fruit could be brett or hops, who cares, it's amazing.

Mouthfeel: Medium body/carb, refreshing finish, not too much hop linger.


Femme Fatale Brett from Evil Twin Brewing
Beer rating: 88 out of 100 with 437 ratings

The Tide And Its Takers
Anchorage Brewing Company