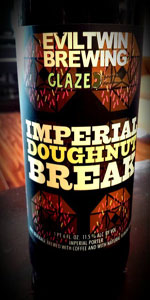 Notes: Did the flavors of sugar and bitter sweet almonds and coffee in Imperial Biscotti Break also make you sentimental? Now we topped it off with insane amounts of doughnuts. This all time American favorite is making it’s way back into the spotlight and we at Evil Twin Brewing are not letting a tasty trend pass us by without taking it to the next level. Drink it with great gusto - Forza Doughnuts.
View: Beers
Reviews: 246 | Ratings: 1,707 | Log in to view all ratings and sort
Reviews by DerekMorgan:

It really doesn't matter what kind of game it is. Don't get me wrong, biscotti is a very nice pastry, but doughnuts win every time! Right?

Opening with a deep, dark "bark" brown color, its cocoa-rich haze keeps the ale looking lighter than black and allows for a certain rusty muck to pronounce. A thick, moussey head builds upon the beer like rich mocha lather. Strong in retention and lace, the ale simply looks like a milkshake.

Rich aromas are a balanced blend of both chocolate and coffee. Coffee house in its make up, the dense scent of latte pulls forth. If it were not for the spicy booze note that lurks in the background, the heavy whipping cream, vanilla, candied almond, over-cooked caramel aromas would have suggested java-infused milkshakes instead of porter.

Its super-creamy and full flavor is all-things-mocha. Soft chocolate flavors wcrap around nutty columbian blend coffee for a smooth and robust taste. Shying away from the roast of espresso or the bitterness of cocoa, the taste favors a sweeter and maltier balance with its caramel, cream, vanilla, almond, brown sugar and starchy brownie batter culmination. With no real "doughnut" taste present (aside from a mild powdered sugar type of confectioner's sweetness), the ale is masterfully woven together for a sultry and decadent taste. The rise of alcohol is caught somewhere between sweet bourbon and spicy rum but is obviously dwarfed by dextrin-rich maltiness.

Its silky-smooth texture is akin to drinking malted milkshakes because of its creamy body that's unwavering. As its milky texture slowly dissolves, it reveals its warm alcohol spiciness even through it's a long-lingering malty-sweet finish.

This "Imperial Porter" is fantastic in every way. With so much acclaim with the doughnut infusion, the actual taste of doughnuts are rarely noticed in the ale- a lot of imagination is required here. But the real problem with the beer is that the "Imperial Biscotti Break" came first. As that is a better ale, this one simply struggles to live up to expectations.

The best beer I've ever had.

The best thing about this beer is its mouth feel. This is how I wish every Imperial Stout felt. Thick as chocolate syrup. With perfect carbonation after 3 years. Just coated the mouth.

The flavor perfectly matched up to the smell. Which is to say, it tasted and smelled like glazed chocolate donut, warm and right out of the oven

Poured black with little head. I was afraid I'd aged it too long. It didn't look like it was still carbonated, but it was when you drink it. The majority of the flavor was chocolate syrup, but there was a nice doughy chewiness underneath.

Smells like a regular - but good! - imperial stout. Chocolate and black coffee ride along with a more basic roasted barley aroma. Very little, if any, sour fruit; nothing particularly resembling a doughnut, either. There is a hint of syrupy, brown sugary, almost liquorice-like sweetness. I could fool myself into thinking this smells like a glazed doughnut, I suppose.

Thick, chocolate, sweet flavor; unbelievably so. Again, one could easily fool themselves into thinking this tastes like a doughnut, just because it's so incredibly thick and sweet. Really, it tastes like a great, sweet imperial stout: tons of chocolate (both sweet and dark); waves of roasted barley (but neither metallic nor tart in presentation); black coffee toward the back-end; a hint of banana.

Incredibly thick and chewy mouthfeel. Think: Ten-FIDY, Speedway Stout, Founders Imperial Stout. Maybe even thicker. A hint of alcohol warmth both in the mouth and on the way down. Sticky coating that lasts.

This is truly a world-class imperial stout. I instantly put it up there with the best non-BA stouts I've ever had (see: above). It's sweet enough to be a dessert stout, but not so sweet that it can't be a breakfast stout. Evil Twin puts out yet another phenomenal stout.

Poured from 22 oz. bottle into tulip glass. It pours an opaque, nearly black mahogany color with a one-finger, mocha colored head and lacing. It is a very attractive pour. It smells of dark chocolate, caramel, almond, and a distinct alcohol. It has a really interesting flavor. Dark roasted coffee, caramel, nuts, roasted malt, and what tastes to me like cherry at the finish. There is also a very subtle hoppy bitterness. This porter is quite thick and chewy, and only lightly carbonated. Although I can taste the alcohol, there is little burn and it is surprisingly drinkable for 11.5% ABV. In fact, you have to be careful. This one really sneaks up on you. Overall, this is a first-rate porter: big, with lots of tastes that blend together very well. I really enjoyed it and would look for it again.

Pours thick as oil & black with a sliver of mocha head, there is some visible bubbles. Nice ily sheen, zero head retention or lacing

MF: Chewy, lively carbonation, thins out a bit once warm

Pretty good for what it is, but give me Biscotti Break any day. Enjoyed it, but over priced, & a little unrefined, Evil Twin I will continue to roll the dice on you, but probably wouldn't if I lived back in Colorado still

On tap at Spokeasy Public House

A: Pours dark brown basically black with a rich brown head that settles to a thin layer and leaves a few spots of lacing.

T: Bready chocolatey malt, molasses, coffee, and a little dark fruit. Very much like biting into a chocolate cake donut.

O: I wish I could pick up a little of the almond, but who cares. It's still a darn tasty imperial porter.

22 oz bottle poured into a tulip

A- Black with a three finger mocha head.

T- Big roasted coffee, bittersweet chocolate, getting hints of the doughtnuts but that is kind of faint, big taste just like all of the other IBB variants.

O- Another great beer from Evil Twin. Wish I the doughnuts were more noticeable, but I will pick this up again!