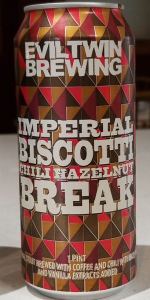 Notes: Imperial stout brewed with coffee and chili with hazelnut and vanilla extracts added.
View: Beers
Reviews: 98 | Ratings: 568 | Log in to view all ratings and sort
Reviews by ToadiesForCody:

Undated can poured into pint glass and allowed to warm.

S: Coffee and hazelnut, mostly. Some dairy and cocoa come in.

T: Coffee with hazelnut creamer is how I would characterize it. Chili heat comes in very slowly at the end. Subtly and nicely done, but not overdone. Cuts the sweetness a bit.

F: Medium bodied, not much carbonation. Exception construction and quite well-balanced.

O: One of the stronger entries in this series. Always playing with fire when you work with chilis (ha ha get it?) but they handled it very well.

My revisiting of Evil Twin CANtinues as they prove themselves willing to put all manner of beers into CANs for the furtherance of The CANQuest (tm)! One of the big questions about CANned beers was how big beers, tarts/sours & spiced beers would fare. It does not seem that there are any qualms on their end, so should there be any on mine?

From the CAN: "Imperial Stout brewed with Coffee and Chili with Hazelnut and Vanilla Extracts added"; "Italy has a certain 'je ne sais quoi' - fab food culture, highly decadent history of art and cool countryside. Some might argue the people are loud and flamboyant, they steal our women, the soccer player melodramatically flop on the pitch. Listen - that's all part of the secret Italian ingredient - keep it cool, confident, arrogant and extravagant. Forza Italia."

I went to Crack! this 16-fl. oz monster open, but it decided to fight me on the Crack! Hmm. I am always wary as something untoward may have happened/be happening, but once acCANplished, all was well. I beCAN a slow, gentle Glug into the awaiting glass, stopping only when the liquid level approached the vessel's CANpacity. It's good to know our limits, but I have yet to find mine. Usually, it finds me! I then CANducted an in-glass swirl that raised just over a finger of dense, foamy, rocky, deep-brown head with very good retention, leaving behind nice lacing. Color was Black/Opaque (SRM = 44), allowing ZERO light penetration. Nose had a definite hazelnut presence & while I could not have identified Chili on my own, it was definitely spicy! I recently drank a MexiCAN Chocolate Stout from PeliCAN Brewing that had the same quality, just less pronounced. Mouthfeel was big, thick & full, like a dollop had been scooped onto my tongue. I let it roll around in my mouth, but as it warmed, it seemed to explode with latent heat. My sinuses keep getting a workout. I liked the way the chocolatiness of the malt worked with the sweetness of the vanilla to counterbalance the heat of the chili & the smokiness of the coffee. Phew! I took a deep breath without really thinking & as I exhaled, I really got a blast of heat. I may need a break after this one. Finish was dry, as is almost always the case when spices are an adjunct in beer. Coupled with the relatively-high ABV & I was CANtemplating calling it a night. Nah.

Great flavors. The heat of peppers, a smoother heat, rather than a biting heat, is folded very nicely into a chocolate blanket. The hazelnut flavor is slightly less pronounced than I like, but is nice, and adds a earthy sweetness to the beer. A bit of coffee bitterness on the palate as well.

Thick, syrupy mouthfeel much like the base beer. Very creamy, and pretty drinkable, considering the alcohol content.

So glad I took a trip to this great grocery store and found this beer on the shelf. Apparently it's made specifically for them, and its awesome.

Appearance: The body is pitch black and the thick, medium-sized head is creamy textured with a nice khaki color. It leaves small spots of lacing on the glass. The head forms and retains surprisingly well for a beer that boasts "11.5% ALC BY VOL" (as indicated by the can).

Aroma: It smell earthy with a coffee aroma.Sniffing the glass is very reminiscent of the aroma of a coffee house or cafe. There really isn't any depth or breadth to the aroma in this beer but the coffee scent is really very nice.

Taste: Up front there is the flavor of chocolate. It is immediately met with this nutty candy-like flavor. It tastes just like a candy bar. There is a clear hazelnut flavor and, again, it tastes just like candy. It is a very sweet tasting beer. The beer does a superb job of handling the alcohol presence. It doesn't quite mask the alcohol but rather allows it to appear at just the right time and then quickly be shuttled away as other flavors try to take the stage. The beer does note one ingredient, "CHILI" (as indicated by the can), that doesn't really pop out while drinking the beer. The chili flavor shows up in the aftertaste along with some of the coffee character. It's actually nice to have this earthy mix of chili and coffee to even things out after having such a sweet beer.

Mouthfeel: The beer is full bodied and smooth. Drinkability on this beer is in the lower side given its abundant sweetness. While it hits the palate like a liquid candy bar it also invokes a restraintive response while drinking the beer. There is only a light bit of burn or tingle on the palate, presumably from the capsicum in the chili.

Overall: I will preface this with a warning that if you do not have a sweet tooth, to not try this beer. However, if you have a sweet tooth you will likely love this. It is chalk full of flavor and it is just what you would expect from an Evil Twin beer. This beer does not pull any punches. I would recommend it and it is good enough that I would highly recommend it over the standard Imperial Biscotti Break. I would drink it again.